Sewage Diversion Tunnel at Schoenheide in the Erzgebirge 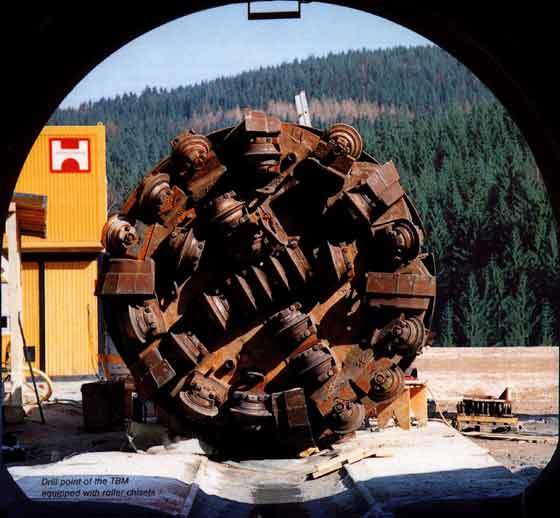 A joint venture, under the leadership of Philipp Holzmann AG was responsible for the conceptual design and construction of a sewage diversion tunnel at Schoenheide in the Erzgebirge, a range of hills along the German-Czech border.

From 1974 to 1983, the Eibenstock drinking-water dam was erected in this area. To avoid contamination of the drinking water reservoir by sewage the natural drain for the villages of Schoenheide and Stutzengrun could no longer be used. The sewage was diverted to flow down-stream of the dam into the Mulde River through a pipe system consisting of a pumping station, a pressure pipeline up to the summit and a gravity flow pipeline.

The Windischwiesen and Gerstenbergweg sewage systems of the city of Eibenstock were connected via branch lines to this system. The construction of a new trans-mountain water diversion system was put out to tender in 1996. It was hoped the system would protect the Eibenstock drinking-water dam, and adapt it to the increased quantities of sewage. It was proposed that a 5km-long trans-mountain water diversion gallery be driven using blasting methods. The Windischwiesen and the Gerstenbergweg line networks had to be integrated into this solution by means of vortex downholes.

In April 1997, the firms Philipp Holzmann AG (Tunnelling Branch) and Ed.Ast & Co. of Graz were awarded the contract of driving the tunnel with a tunnel boring machine (TBM) for a fixed price. Due to the risk consideration with respect to the prescribed route of the tunnel and the studies of alternate routes with possible detours around the former mining areas, the commencement of construction was delayed until October 1997.

While the site mobilsation was set up at the Wolfsgruen Portal and the necessary access was created from Niedshardsthaler Strasse to the tunnel portal, one sewage and one mountain-water diversion pipeline were made from the tunnel portal to the Wolfsgruen Sewage Treatment Plant and the Zwickauer Mulde respectively. To prepare the advancing of the tunnel with the TBM, which can only be used in hard rock, a preliminary cut was made in the weathered zones of the hillside the slope was secured. The whole tunnel was driven from the Wolfsgruen Portal and rose to the recovery pit.

The tunnel is 4,965m long and has a diameter of 3.5m. Muehlhauser rotary tippers with a volume of 3.5m3, diesel locomotives with 133KW of driving output and platform and silo wagons were used to carry away much debris and for supply transports.

The wagons were alternated by means of a slide and a California switch in the area at the end of the trailer. The rotary tippers were emptied by means of a rotary tipping system at the portal to the tunnel. The tunnel was ventilated by fresh air blown into the tunnel with a ventilation pipe diameter of 800mm. In the mining-endangered zones a preliminary exploration was undertaken. Both 35m-long holes with diameters of 64.5mm and also 10m-long lateral holes were drilled in the elms using column hammer drills. This was done in order to detect cavities and water-filled cavities as early as possible and to avoid sudden inflows of water by relieving the stress of water ahead of time.

Prior to driving the tunnel under the Rahmersbach upstream dam, the water level in the reservoir was lowered in order to reduce the water pressure and to provide more safety. To connect the catchment areas of Windischwiesen and Gerstenbergweg, two drilled shafts with a diameter of 700mm each were made. The shafts were drilled by means of a wire rope core drilling procedure to make a preliminary boring, with a diameter of 150mm, from top to bottom. The hole was then expanded from the bottom to the top using a step-drilling crown. The installation consisted of a vortex drop pipeline, a pressure surge relief pipeline and electric cables.

The crossing of the Zwickauer Mulde from the recovery shaft on the east side of the Mulde over to Schoenheiderhammer on the other side was in the cut-and-cover method. The tunnel was finished with bottom lining segments, which were used as track supports for the rail conveyors while the tunnel was advanced. Through a drainage gutter, mountain water was discharged. The sewage passes through the tunnel in a pipeline. In places with healthy rock, the arch of the tunnel did not receive a lining. In some areas with crumbling rock, the walls were secured with shotcrete, rock anchors and steel arches. No difficulties were experienced while working through the mining areas. Forepoling using stakes and sheet metal were required in one fault zone.