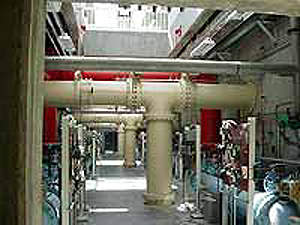 The 114,000m&#179;/d St Joseph water treatment plant was built in 2000, to replace the City's original treatment facility which was ageing and susceptible to flooding.

Four years after it first became operational, Missouri-American Water Company’s new St Joseph WTP seems to have emerged from the controversy surrounding its early history and gained wider acclaim as a positive asset to the city’s future prosperity.

The new 114,000m³/d plant was built in 2000, to replace the City’s original treatment facility which was ageing and susceptible to flooding. Missouri-American awarded the contract for the $30 million plant to Story Construction in 1998, as part of a wider program of upgrades and improvements to the local water infrastructure, costing a total of $79 million.

From the outset, the project proved somewhat controversial. Local consumers expressed concern regarding possible large price increases to fund the new plant, questions were asked over the cost-effectiveness of abandoning the old works, rather than implementing flood protection measures, and difficulties arose over the finance terms.

In May 2003, St Joseph City Council passed a resolution to investigate the options for either buying out the utility company or developing a municipal service of their own. The drive to take control of the local water provision arose largely out of a desire to enable the city to offer competitive water rates as an inducement to new businesses looking to relocate.

However, by the following October, the difficulties between the two parties seemed to have been effectively resolved when the Missouri Public Service Commission passed a tariff which will allow the competing towns’ rates for large water users to be matched. This economic development rider (EDR) has been hailed as a huge boost to local economic development and has already brought new businesses to the area. In addition, changes are being implemented to improve customer service and communication with the city.

Ground water pumped from wells in Andrew County forms the raw source for the treatment plant, which is itself located in the northwest section of Buchanan County, approx. 40 miles north of Kansas City.

The potable water produced is distributed within the St. Joseph District service area, which encompasses the northwestern part of Missouri and includes St. Joseph itself and surrounding areas in Buchanan, Andrew and DeKalb Counties. Water is also sold for resale to the cities of Elwood, Kansas and Wathena.

Using modern treatment approaches, the plant is of largely traditional design, incorporating a rapid mix basin, filters, a 5,700m³ clear well, process clarifiers, chemical dosing facilities, pumping station and control building. In common with many areas of the United States, population increase, economic development and water supply are interlinked factors in the region’s sustainable growth. Currently rated at 114,000m³/d, the facility has been specifically designed to allow for future expansion to meet the projected increase in demand, without the need for extensive upgrades. In addition, the ability of the plant to meet future regulatory standards was also an important consideration in the overall design.

Also included in the scope of the wider infrastructure improvement project were the provision of a raw water and finished water pipelines and associated civil works at the well field.

Missouri-American Water Company own and operate the plant. The main contractor was Story Construction, with engineering services, principally on the distribution main, provided by Midland Engineering / Snyder & Associates. Missouri Public Service Commission are responsible for tariff regulation and granted the EDR. Missouri-American has applied for Advanced Partner membership in the environmental management partnership program run by the Missouri Department of Natural Resources.