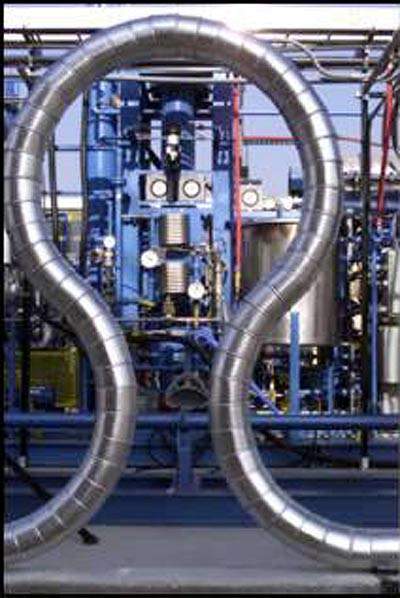 The STORS system at ThermoEnergy's plant in Colton, California, USA.

When ThermoEnergy signed a letter of intent with Shenzhen Fuhaoheng Investment in June 2002, it was hoped that it would herald the start of a worldwide roll-out of its licensed water technologies. Unfortunately, by the end of the year, the Chinese letter of intent had expired and the necessary capital to embark on the anticipated joint venture had not been raised.

Despite this setback, two years on, the full-scale application of the company’s novel treatments has come a step nearer with the announcement on 12 May 2004 that their potential is to be evaluated at a municipal treatment works in the US. The forthcoming operational assessment of the Ammonia Recovery Process (ARP) at King County’s West Point WWTP in Seattle, comes five years after its demonstration at New York City’s Oakwood Beach plant led to it being hailed as one of 1999’s best new technologies.

It also follows four years after the successful conclusion of the first large pilot plant in Colton, California, which had demonstrated ARP in combination with the Sludge-To-Oil Reactor System (STORS) which had been intended for use in China.

These two distinct wastewater treatment technologies have been developed to fulfil separate but related goals – the efficient reduction of wastewater sludges and the lowering of nutrient loadings in wastewater effluent.

STORS is a hydrothermal process, capable of taking dewatered raw, post-digested or activated sludge as an alternative to anaerobic digestion for primary and secondary treatment.

The sludge is converted at elevated temperature and pressure into a useful burnable fuel, either as an oil with 90% of the heating value of diesel, or a solid “char” product broadly similar to medium grade coal but with only 10% of the volume of the original input material.

ARP uses a proprietary resin system to remove ammonia from wastewater, converting nitrogen-rich backwash into a useful commercial-grade fertilizer. Both technologies have significant inbuilt flexibility, allowing the products of each – oil or char for STORS, ammonium sulphate, ammonium phosphate or liquid ammonia for ARP – to be selected to match local regulatory or economic circumstances.

Although ARP can be used as a stand-alone, it was originally developed to treat the nitrogen-rich effluent after STORS treatment before it is returned to the head of the wastewater treatment plant. Although both technologies treat biologically active elements within the flow, neither is a biological process, making them more operationally robust and less sensitive to fluctuations in wastewater influent character.

The STORS / ARP system can be easily integrated into existing treatment plants and has the major advantage that it requires considerably less space than conventional methods to process the same input. This is a major potential attraction for large urban areas where extended treatment capacity is required but land for expansion is limited, or where ageing existing digesters are reaching the end of their useful life.

There are many advantages to the use of this approach. It offers the conversion of sewage to a useful commodity, generates energy for use either on-site or for sale to the local market, provides significantly enhanced nitrogen removal, reduces potential odour nuisance and can reduce transportation costs. In addition, the STORS / ARP process has been shown to degrade a number of toxic organic materials very effectively, such as Lindane and other pesticides, removing them from the discharge stream.

The intention had been to establish a joint venture to design, construct and operate wastewater treatment plants using STORS / ARP technology with the People’s Republic of China, with the first project being a commercial scale pilot plant located in Shenzhen. This was planned to demonstrate the efficacy of the system and act as the forerunner of larger commercial, municipal and industrial wastewater treatment projects throughout the country, ultimately allowing the JV to showcase the technologies at the 2008 Olympics in Beijing.

However, despite identifying considerable commercial potential in China, now the world’s seventh largest trading nation, attracting the necessary funding proved impossible and the project floundered. The original letter of intent expired on 31 December 2002, although ThermoEnergy maintain an ongoing dialogue with their prospective Chinese partners.

Shenzhen was expected to be the first project outside the United States and for some time after its apparent demise, ThermoEnergy continued to both search for suitable opportunities to employ its technologies and seek the capital necessary to sustain its continued efforts.

In the first quarter of 2004 the arrival of new investors significantly helped with the latter. The contract announced in May to evaluate the potential economic and process impact of ARP at King County Metro’s West Point WWTP is a major step towards achieving the former on a commercial basis.

This technology can be used to reduce plant nitrogen nutrient emissions and as an integrated means to enhanced biogas production, bringing lower ammonia toxicity and an optimised methane yield from anaerobic digesters to both new or existing plants.

This has spurred renewed interest in both APR and STORS and in addition to King County, several other large metropolitan wastewater agencies within the United States are currently evaluating these technologies for possible use in the future.

The STORS and ARP technology was developed by Battelle Memorial Institute, ThermoEnergy being exclusive worldwide licensees, with the exception of STORS in Japan. ThermoEnergy and Foster Wheeler Environmental Corporation formed the ThermoEnergy Environmental JVC. Foster Wheeler were responsible for designing, building and operating the Colton demonstration / pilot plant. Other parties involved in this plant were the City of Colton, the US Environmental Protection Agency and the Civil Engineering Research Foundation. The intended JV partner at Shenzhen was Shenzhen Fuhaoheng Investment, with whom ThermoEnergy signed the original letter of intent. Camp Dresser and McKee are to be the partners for the forthcoming King County evaluation trials.