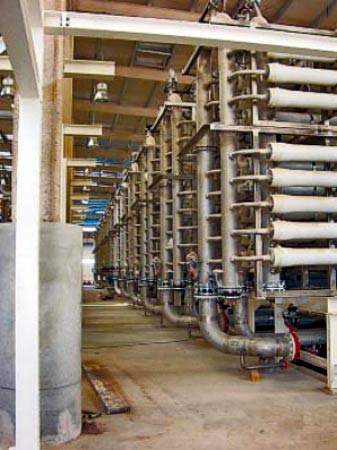 Some of the plant's membrane elements in situ; Sulaibiya is the largest facility in the world to use reverse osmosis / ultrafiltration membrane-based water purification. 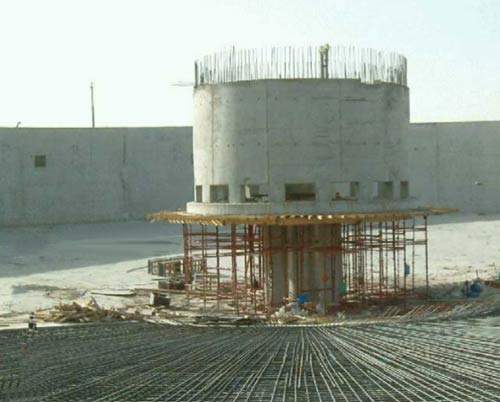 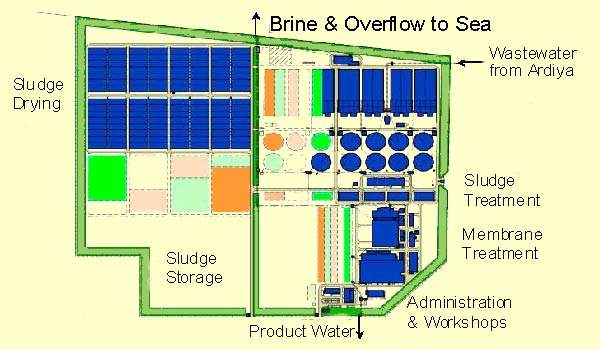 Diagram of the general layout of the Sulaibiya plant. 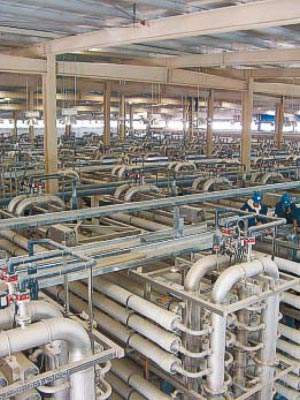 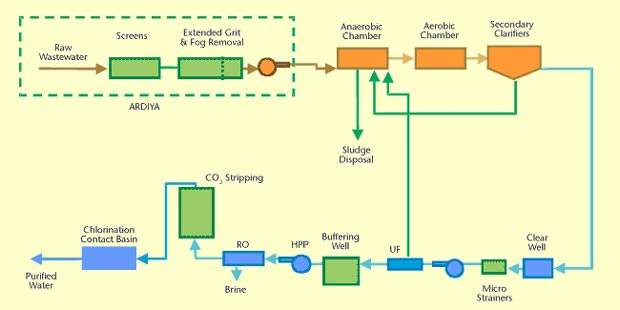 Schematic flow diagram of the major treatment steps at the new plant. 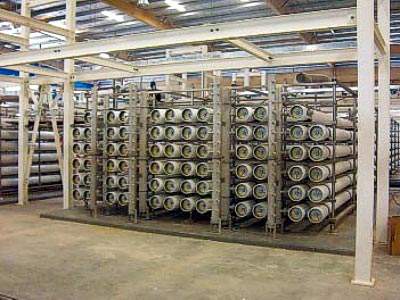 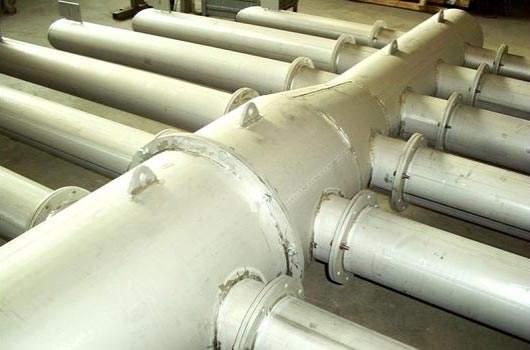 The distributor for one of the stripping towers; the plant has six such de-gassifying towers to remove CO2 from the permeate. 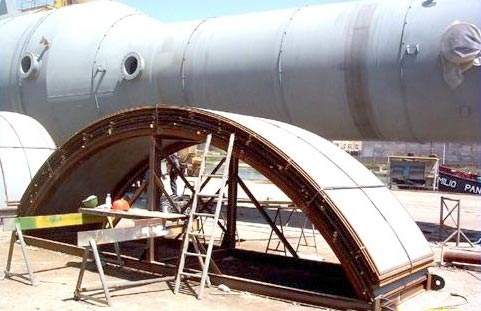 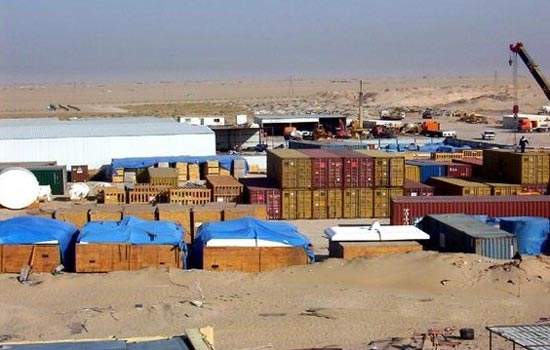 The site in September 2003. The design and build phase accounts for 30 months of the 30-year concession. 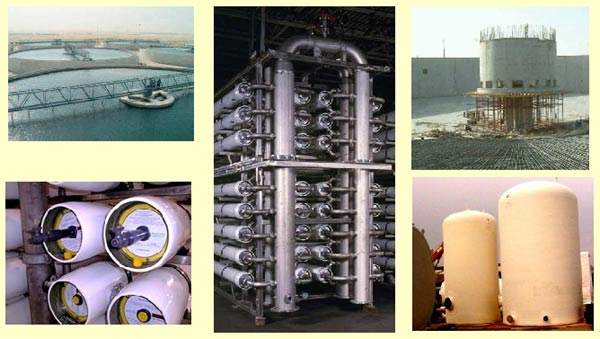 Images from the project; the Sulaibiya plant is the largest of its kind in the world and is expected to reduce Kuwait's use of non-renewable water by more than 80% overall. 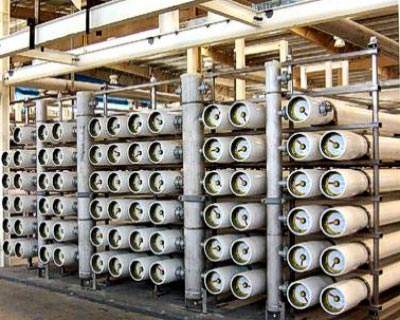 Although the product water is destined for non-potable uses, it is treated to potable quality. The UF system achieves total removal of suspended solids and virtually eliminates bacteria and viruses.

Shortly after its completion in November 2004, the Sulaibiya Wastewater Treatment and Reclamation Plant won ‘Wastewater Project of the Year’ in the 2005 Global Water Awards. Described by the judges as a “powerful statement of the future of water resources across the whole Middle East and North Africa region”, the plant is currently by far the largest facility of its kind in the world to use reverse osmosis (RO) and ultrafiltration (UF) membrane-based water purification.

With an initial daily capacity of up to 375,000m³ – and designed for extension to 600,000m³/d in the future – Sulaibiya treats wastewater to potable quality for non-potable uses in agriculture, industry and aquifer recharge. Formally dedicated in March 2005, the plant’s first product water will be supplied in December. When fully operational, the facility is predicted to contribute 26% of Kuwait’s overall water demand, reducing the annual demand from non-potable sources from 142 million m³ to 26 million m³.

The project is also remarkable in that it is the first transaction of this size to be funded solely by domestic banks at a total project cost of KD130 million ($430 million). The KD114.25 million ($377 million) loan over 25 years is the largest ever Kuwaiti Dinar loan transaction and represents an 85:15 debt to equity ratio.

The Ministry of Public Works awarded the build-own-transfer (BOT) contract to Utilities Development Company (UDC), a special purpose vehicle owned by the Kharafi Group – one of the regions largest contractors – and Ionics. Though pre-qualification took place in October 1998 and bids were received in April 2000, an ultimately unsuccessful legal action over aspects of the tender process delayed the formal signing of the contract until May 2001.

The concession has a 30-year period, comprising 30 months of design and build and 27.5 years of operation and management. The winning water tariff was $0.47/m³ and the projected revenue to UDC over the period of the contract is in excess of $2 billion.

Two major problems led to the implementation of the Sulaibiya wastewater treatment and reclamation project. Firstly, the existing WWTP at Ardiya had reached capacity and, since there was no scope to extend it, the increasing volumes of wastewater flow required the provision of alternative treatment facilities. Secondly, the country’s brackish water resources are now no longer sufficient to meet the growing demand for non-potable use. The project was designed as an integrated response to resolve both of these issues.

The Ardiya plant acts as a pre-treatment phase, receiving, screening and degreasing the wastewater inflow. A 25km-long main feeder pipeline conveys the pre-treated flow to the new Sulaibiya WWTP, where it is treated to potable water standards. The Sulaibiya plant itself comprises three elements – biological nutrient removal, RO / UF membranes and sludge treatment. A new 1km product water pipeline transports the finished effluent to the nearby brackish water gathering centre prior to use, while the membrane system brine overflow is returned to the sea via another new 25km pipeline to the existing Ardiya outflow channel. A new pumping station was also constructed as part of the associated works.

Over ten pipelines feed wastewater to the Ardiya plant inlet from Kuwait City and the surrounding area. Four parallel lines of 6mm step screens remove coarse particles and an aerated grit chamber excludes sand and grit down to a particle size of 0.2mm. Two 20,000m³ circular buffer tanks balance the influent variation, which fluctuates between 5,000m³/hr and 31,250m³/hr, to regulate the flow to a range between 10,000m³/hr and 20,000m³/hr. Agitators within the buffer tanks maintain a flow velocity greater than 0.3m/s to avoid sedimentation problems.

All the structures are covered and a scrubber system is used to treat the air extracted to help prevent odour nuisance.

The existing pumping station in Ardiya had six parallel pumps and two additional standby pumps, giving a capacity of 20,000m³/hr. To accommodate the 50% higher final flow rate, the system design called for the installation of a further four pumps. In addition, 18 surge vessels have been constructed, each with a volume of 130m³, at the pumping station outlet to protect the new main feed pipeline.

The treatment regime has been designed to remove organics, minimise nitrate release, reduce phosphate outflow to overcome scaling in the third array of the RO membranes, and smooth flow fluctuations in the secondary effluent ahead of the membranes.

An inflow and distribution chamber receives and mixes the inflow of wastewater with the backwash from ultra-filtration and supernatant from sludge treatment. From here it is distributed to the aeration tanks. There are nine aeration tanks with a total volume of 208,900m³, offering anaerobic, anoxic and aerobic treatment zones.

Process performance is optimised within the aeration tanks to achieve the treatment goals. Part of the activated sludge from the anaerobic zone is transferred to the RAS denitrification chamber to serve as a carbon source. With no available oxygen present, phosphate re-dissolves to be later re-incorporated at an enhanced rate into biomass – the so-called “luxury uptake” – in the aerobic zones. Although this means that high phosphate concentrations occur when the mixed liquor enters the anoxic zone, it subsequently leads to the requisite phosphate reduction necessary to protect the RO membranes. In addition, nitrified activated sludge is returned into the anoxic zone to keep the nitrate concentration in the aerobic zone low, leading to the lowered levels required in the secondary effluent.

Finally, the mixed liquor flows from the aerobic zone to the nine 52.5m-diameter, 4.8m-deep secondary clarifiers, where it is separated into secondary effluent and RAS.

Sludge is treated to provide a material suitable for unrestricted agricultural use, requiring it to be dry, with a low organic content and free of pathogens. Seven gravity belt thickeners and 120 sludge drying beds are used to remove water, while the organic component is reduced by four 8,000m³ aerobic digesters. The resulting product is subsequently stored for more than six months before consignment for use.

Designed to recover 85% of the inflow, discharging the remaining 15% to the sea as brine, the UF / RO removes residual pollutants, dissolved solids and pathogens from secondary effluent, to yield potable quality water.

The front end of the system comprises five 60µm disc filters and an 8,000m³ secondary effluent basin, which serves as suction and chemical conditioning tank for the UF pumps.

Arranged in 68 skids, each equipped with 32 pressure vessels, the UF plant has a total membrane area of 304,640m². The cross-flow, dead-end membranes will be cleaned by chemical enhanced backwash using a primary acid wash, followed up with chlorine rinse if required.

Filtrate flows into a 6,000m³ basin before being pumped to the RO facility. This comprises 24 first array skids, 12 second array skids and six third array skids, each holding 72 20cm pressure vessels, equipped with seven, 20cm x 1m membrane modules per vessel. The first array is fed by six groups of four pumps with six fully independent sump pumps, the second by six groups of two pumps and the third by six pumps. All of the feed pumps are rated at 780m³/hr capacity. The facility is fitted with an in situ cleaning system.

The contract was awarded and administered by the Kuwaiti Ministry of Public Works. The main contractor is UDC – jointly owned by the Kharafi Group (75%) and Ionics (25%). The Philipp Holzmann Kharafi Sulaibiya Joint Venture (PHKSJV) were EPC contractors to design and build the complete project. ILF Consulting were responsible for the project design and Ionics Italba for the membrane treatment plant. Kharafi National, in cooperation with United Utilities, have the 27.5-year O&M contract, with Ionics responsible for the membrane system.

The National Bank of Kuwait (NBK), Gulf Bank and The Bank of Kuwait and the Middle East arranged finance, with NBK acting as the facility agent. ABN Amro were financial advisers to UDC. PKF acted as financial model auditor for the loan arrangers and the design review and technical due diligence was performed by Halcrow.