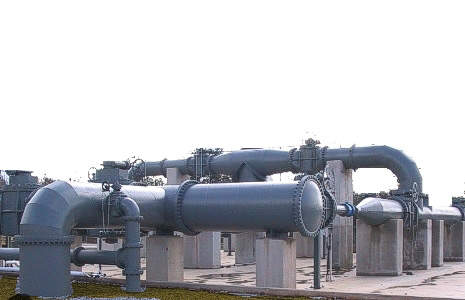 The transmission pipeline and intake structures were built large enough to accommodate the planned future expansion. Super duplex stainless steel was specified throughout the plant for the pipes, valves, impellers and pump casings to cope with the high pressures required and the use of warm salt water. 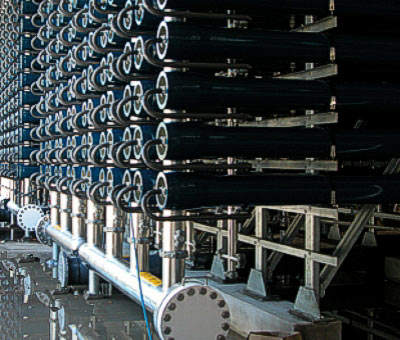 Eight SWRO membranes sit in each of the 1,176 pressure vessels, which comprise the central part of the desalination system. These are divided into seven separate treatment trains. 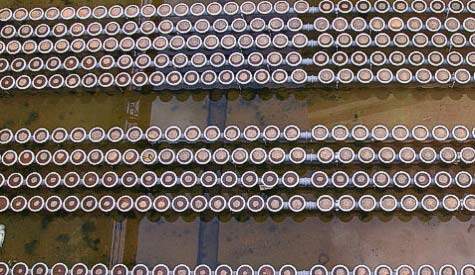 Diffusers are fitted to the product water treatment systems, allowing chemical dosing to be used to adjust the hardness and pH further if required. 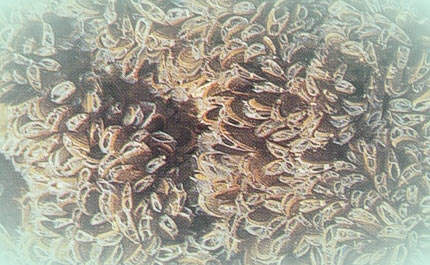 Tiny Asian green mussels, originally native to the Indian and Pacific oceans, were found to be clogging filters at the plant. It is thought that they were accidentally introduced into Tampa Bay in ballast water from a bulk cargo ship. 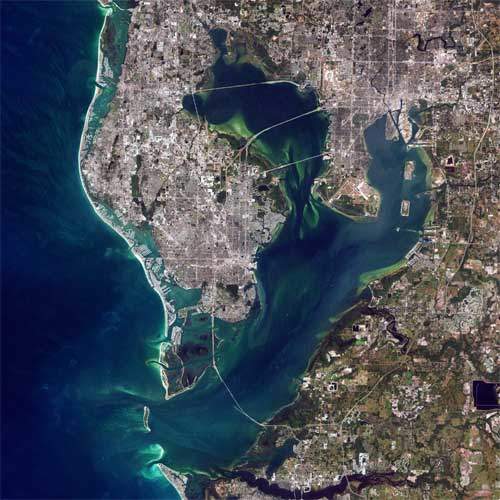 Satellite photograph of Tampa Bay. The desalination plant is located adjacent to the Big Bend power station on the south shore at Apollo Beach, 18 miles south of Tampa itself. 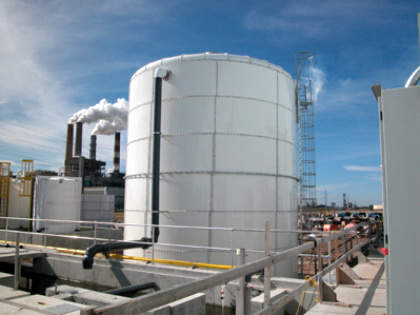 View of the desalination plant – the largest of its kind in the USA – with the Big Bend power station in the background. 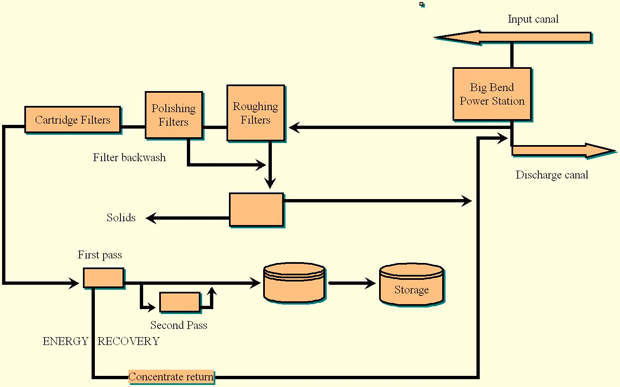 Simplified schematic of the process: in practice the permeate requires further treatment before distribution, including pH adjustment lime stabilisation and chlorination.

Despite a troubled history, including the bankruptcy of three of the companies involved and a dispute over ownership and control, which reached the federal courts, the Tampa Bay plant became fully operational in early 2008. It was originally scheduled to open in 2006.

The largest seawater desalination facility in the US, it produces an initial 25 million gallons per day (mgd) of drinking water, to help reduce the growing demand on the area’s aquifers. The plant now provides 10% of the region’s drinking water supply.

The initial project budget was $110m, but this rose to $158m due to additional remediation work of the plant. The South-West Florida Water Management District (SWFWMD) had reimbursed $85m to Tampa Bay Water for the plant’s capital cost as per a partnership agreement.

In February 2010, the facility passed two final performance tests. The plant was required to produce 25mgd for 120 consecutive days and was also required to maintain an average of 20mgd for 12 consecutive months. Tampa Bay Water will now get $31.25m from the SWFWMD as the plant has cleared the tests.

The original project involved the construction of the seawater reverse osmosis (SWRO) plant itself, a seawater intake, concentrate discharge system, various chemical storage and dosing facilities and 24km (15 miles) of product water transmission main. It was subsequently extended to encompass major repair and remediation work, which included redesigning and replacing all the first-pass membranes, along with modifying the chemical facilities, pre-treatment system, flocculation and sedimentation.

In addition, the sand filters and a number of pumps were modified, together with the installation of an additional filtration system. Tampa Bay Water – the regional agency responsible for supplying the needs of a population of approximately 1.8 million – awarded the contract to remediate and subsequently run the plant to American Water / Pridesa in 2004.

In October 1996, the West Coast Regional Water Supply Authority – later to become Tampa Bay Water – issued an initial call for proposals to design, build, operate and own a desalination plant. Four vendors submitted proposals in December 1997 and binding competitive tenders were received in October 1998. Final proposals were received in February 1999 and in July, Tampa Bay Water awarded the contract to S&W Water, a Stone and Webster – Poseidon Resources JVC, on a design, build, own, operate, & transfer (DBOOT) basis. Their proposal called for construction to commence in 2001 on a site adjacent to Tampa Electric’s Big Bend 2,000MW power station.

However, in 2000, Stone & Webster had declared bankruptcy, leaving S&W Water without an engineering and construction partner. Later that year, with performance deadlines looming, Poseidon teamed up with Covanta Energy. A year on, the replacement went the same way as its predecessor. A new company was created to complete the plant, Covanta Tampa Construction (CTC), and in August 2001 construction finally began.

Early in 2002, it became clear that Poseidon and CTC had been unsuccessful in securing long-term financing. Tampa Bay Water decided to buy out Poseidon’s interest in the project and push forward – allowing them to save $1m a year in financing charges, while retaining CTC to finish the job.

Several deadlines were missed in 2003, beginning with 31st January and repeated in March – although the month also saw the first 20,000m³ of water produced. In May, a crucial two-week performance test revealed 31 deficiencies in the plant, including excessive membrane silting, which was compounded in September by Asian green mussels clogging the filters. Yet another default on the contract followed.

In October, with the plant still unable to pass the 14-day performance test required for final acceptance, Covanta Tampa Construction followed its parent company into bankruptcy. The ensuing dispute with Tampa Bay led to a court hearing in the December, though a subsequent settlement was agreed in 2004. Tampa Bay Water retained full control of the plant and its operating contract in return for less than the cost of the construction contract.

In November 2004, American Water / Pridesa were awarded the contract to fix the plant – payable on completion. Remediation work began in October 2005 and concluded with a satisfactory acceptance test in November 2007.

The raw water intake is beside the neighbouring power plant’s four discharge tunnels, two of which were tapped to divert around 166,000m³/day of the cooling outflow into the intake structure. From the intake, the water is pumped to the pre-treatment facility.

Chemical filtration agents and ferric sulphate are added to the inflow, which passes through a two-stage sand filter. The medium is continuously backwashed, which further helps to lower the silt density index of the exiting water. There is also provision for dosing the water to adjust pH if required.

“In November 2004, American Water / Pridesa were awarded the contract to fix the plant.”

An 800hp vertical turbine transfer pump in each train draws raw water from the pre-treatment wet well to the 5µm cartridge filter assembly. The water then enters the RO process itself.

Each battery of reverse osmosis membranes is fed with pressurised water by a 2,250hp, horizontal split case high-pressure pump, equipped with variable frequency drives which allow the feed pressure to be varied between 625psi and 1,050psi. These were fitted to the pumps to accommodate the variation in salinity of the water, which naturally ranges between 18 and 32 parts per thousand (ppt) in Tampa Bay, compared with the narrower 28-35ppt of typical seawater. Being able to vary the input pressure allows the plant to match its operating power requirements to salinity changes.

Each of the plant’s seven RO batteries has a minimum rated production of 16,000m³/day and consists of 168 pressure vessels, containing eight SWRO membranes apiece.

“To balance the pH, a solution of carbonic acid is simultaneously diffused into the chamber.”

The permeate produced flows into a 1m diameter header pipe, situated below. The high-pressure concentrate returns to the ERT for energy recovery and is then mixed with the power station cooling water in a ratio of 70:1 to dilute its high salinity, before being finally discharged.

The permeate requires further treatment before distribution and use, leading to the building of a number of chemical storage vessels.

A 22.5m³ bulk tank and a 4.5m³ day tank have been constructed to store the sodium hypochlorite added to chlorinate the water. The calcium hydroxide, used to introduce hardness, is housed in a 50t silo. It is added to the product water as a slurry, in two up-flow lime contact chambers, some 12m high.

To balance the pH, a solution of carbonic acid is simultaneously diffused into the chamber. The carbon dioxide used to make the solution is stored in another on-site tank. Chemical diffusers fitted to the lime chamber discharge weirs allow for further pH adjustment, if necessary.

The finished product water flows into a 20,000m³ storage tank and is eventually pumped 15 miles along a 1m pipeline to the Brandon regional distribution facility, crossing two navigable rivers. Directional drilling was used in one case to position 550m of fibreglass pipe 18m below the river bed.