Jordanian Ministry of Water and Irrigation

Arab Fund for Economic and Social Development, the Government of Jordan
Expand

The Tannur Dam during construction. (image courtesy of Mott McDonald) 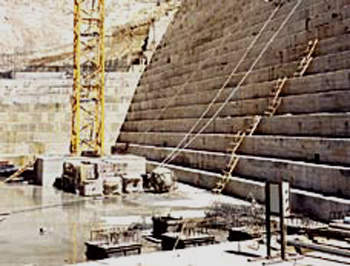 The base of the Tannur Dam during construction. (image courtesy of Mott McDonald) 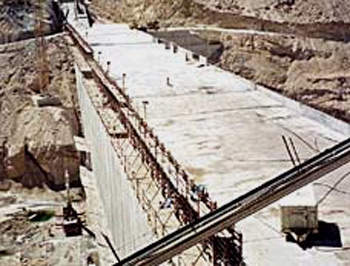 The 12m-wide crest of the Tannur Dam. (image courtesy of Mott McDonald) 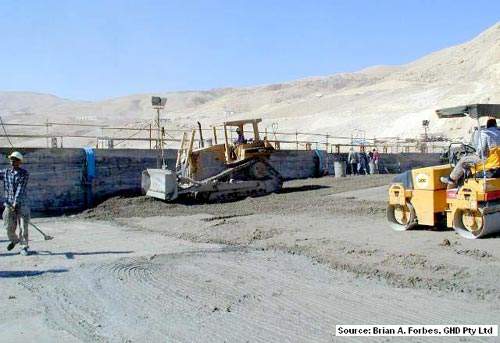 Mortar spreading and feather edge treatment applied to the concrete. The Tannur Dam was the first in the Middle East to be constructed with RCC and used a sloped layer method, never before seen outside of China. 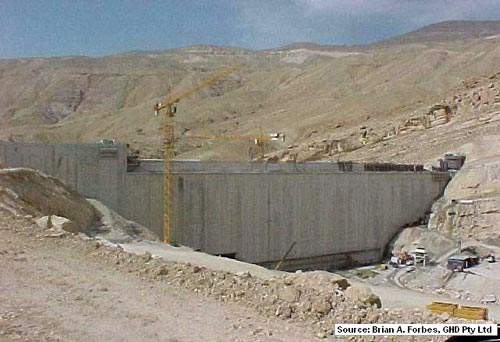 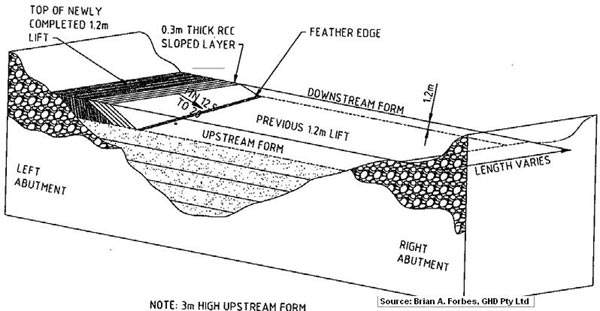 Sketch-diagram of the sloped layer method. This approach involves building up multiple layers, laid successively to build up one single super-layer sloped at an incline of between 1:10 and 1:20, which maximises structural integrity. 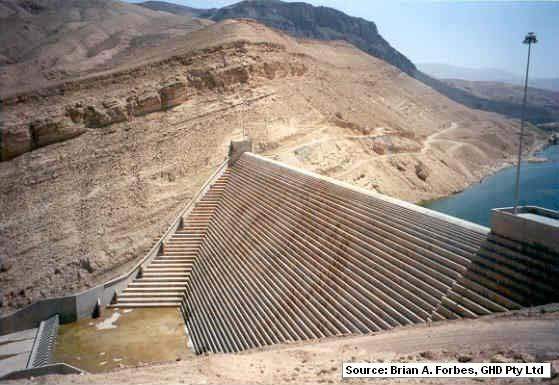 The downstream view of the dam in April 2002, with the reservoir now partly filled. The final reservoir capacity is 17 million m&#179;.

Some 60m high, 250m long and 12m wide at its crest, with a reservoir capacity of 17 million m³, the Tannur Dam was the first in the Middle East to be constructed with Roller Compacted Concrete (RCC) and used a sloped layer method, not previously seen outside of China.

The Jordanian Ministry of Water and Irrigation awarded the original contract to a Bec Freres / Camperon Bernard joint venture in February 1999. RCC placement began in January 2000 and between February and December, 220,000m³ were laid. Construction was completed in 2001 and formally inaugurated by King Abdullah II of Jordan that October.

Mott Macdonald, who had been involved in the initial tender design, remained involved in the review, supervision and administration stages, in joint venture with Gutteridge, Haskins & Davey, who were themselves the RCC engineers.

The Tannur project cost was $24 million.

The Tannur Dam, sited 150km south of Amman on Wadi Hasa, forms part of the first phase of a larger programme of works – the southern Ghors integrated development project – delivered in two main phases between 1999 and 2002. The other major elements of Phase I include the construction of a similar dam at Wala, a smaller water diversion and conveyance installation, plus associated pipelines, roads and infrastructure. Phase II chiefly consisted of the building of another RCC dam on Wadi Mujib, some 62m high, 660m long and 12m wide at the crest.

Other work undertaken included drilling and lining a 1.3km, 2.3m diameter tunnel, the construction of the North and South conveyors, 28km and 75km long respectively, building three pumping stations – in Haditha, Sammar and Fifa – and the installation of three transformers. The irrigation aspect of the project required nearly 1,200ha (3000 acres) of land to be cleared and levelled, together with the provision of 35km of ductile iron pipes, 50km of PVC pipes and 300 water intakes equipped with meters and pressure regulating valves. In addition, drainage and flood protection measures called for 100km of surface drains to remove excess water, 120km of perforated PVC pipes for the subsurface drainage and the construction of 15km of gabion bund walls to protect the irrigated land.

By maximising and regulating the use of the affected water resources, the project is intended to help increase agricultural production, provide employment and generate additional income from both industry and tourism.

Jordan’s national scarcity of water is widely accepted to be the single most important limit to the country’s economic growth. The current annual water use exceeds 1 billion m³ and with the population – nearly 5.5 million in July 2003 – increasing at a yearly rate of 2.78%, the demand is projected to rise to over 1.3 billion m³ by 2005, having nearly doubled since the mid-1990s. The current annual allowance of 200m³ per capita, lags significantly behind other countries in the region, representing 65% less than that available in Israel and Syria and 85% less than Egypt. The southern Ghors integrated development project is one of many schemes in a huge and ongoing programme of investment in the water sector aimed to address these problems.

In the RCC approach, progressive layers of a relatively dry mix of concrete are laid, each being compacted down in turn by rollers, allowing dams to be built much faster and significantly cheaper than by traditional methods of construction. However, although economic considerations and speed of construction are often major factors in the selection of the method, this can lead to compromised quality and water-tightness. One of the reasons for this is the structural difference between RCC dams and their conventionally placed concrete counterparts. The layering process involved in RCC inevitably leads to the presence of a large number of horizontal joints between the strata, since in order to maintain the necessary compaction density by roller, the layers are typically only 0.3m thick. In conventionally-laid and vibrated concrete the layer thickness is around 1.5m, which means that there will be five times fewer joints, compared with a similar sized RCC dam.

Consequently, the performance of RCC dams is almost wholly dependent on the integrity of these horizontal joints. How well individual layers adhere to one another is governed by two mechanisms – the forming of a cement bond and the penetration of aggregate from the upper layer into the lower. Inevitably, layer joints exhibit lower tensile strength, shear strength and impermeability than the RCC itself. At Tannur, the potential problems this poses were addressed by using the sloped layer method.

Construction of the dam began using the traditional ‘horizontal’ RCC lift method until a height of 15m had been reached, after which the sloped layer method was used. This approach to laying RCC was first developed and adopted during the construction of the 130m high Jiangya Dam in 1997-8 and subsequently used in a number of projects, such as the Mianhuatan and Dachaoshan dams.

This method also involves building up multiple layers, again in 0.3m thicknesses, but laid successively to build up one single super-layer, 1.2m thick in the case of Tannur, sloped at an incline of between 1:10 and 1:20. The main advantage of this is that it allows subsequent layers to be put in place ahead of the lower layer setting, which makes the RCC functionally monolithic across the joint, effectively minimising loss of structural integrity.

In addition to significantly improving joint strength, this also reduces surface preparation, curing and surface protection, as well as allowing formwork to be removed earlier.

Claimed to be the first dam outside of China to built using this method, Tannur highlights a major advance in RCC construction techniques, particularly for large structures where joint cohesion, tensile strength and speed of construction are important considerations.

Many parties have been involved in the various elements of the wider Southern Ghors project, including the Government of Jordan, the Jordan Valley Authority, Water Authority of Jordan, Ministry of Water and Irrigation and the Irrigation Advisory Service.

The Tannur contract was formally awarded by the Jordanian Ministry of Water and Irrigation, the dam itself being owned by the Jordan Valley Authority. The work was funded by the Arab Fund for Economic and Social Development and the Government of Jordan. Design review and modifications, construction supervision and contract administration were performed by a joint venture between Mott MacDonald and Gutteridge, Haskins & Davey (GHD). The main contractor was a Bec Freres / Camperon Bernard JVC with Al-Jafar as construction sub-contractor and Soletanche-Bache as foundation sub-contractor. GHD were the roller compacted concrete engineers and Mott MacDonald and CEC Sadj Partners were the consultant engineers. Giovanola Freres supplied the hydromechanical equipment.