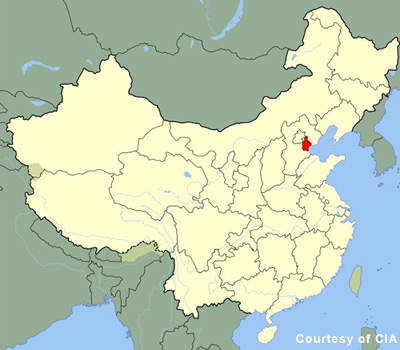 Location map of Tianjin; The city is located on northern China’s “Gold Coast” on the Bohai Gulf, some 140km to the southeast of Beijing. 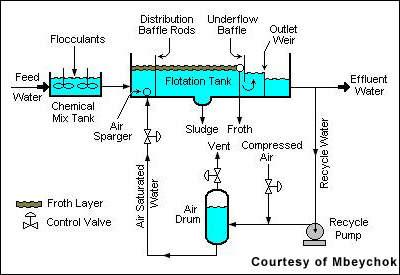 Schematic of a DAF unit. This treatment system was chosen for its ability to deal with the algal loads which periodically affect the source waters.

Pollution of the Luan and Yellow Rivers often leads to excessive algal growth, particularly in the summer.

Formally opened in June 2007, the newly expanded and refurbished Tianjin Jie Yuan Water Treatment Plant features the largest dissolved air flotation (DAF) treatment system of its kind in China – and one of the largest in the world. DAF was chosen largely because of its effectiveness in dealing with high algal loads, which have been a historical problem for Tianjin.

The programme of work increased the facility’s capacity by 200 ML/d to 500 ML/d and, in addition to the construction and installation of new water treatment systems and associated equipment, also called for the demolition of part of the pre-existing plant. The project was undertaken by Earth Tech, forming the Tianjin Earth Tech Jie Yuan Water Co as part of a joint venture with the Tianjin Water Works Company (TWWC), with Earth Tech owning 52% and TWWC 48%.

The contract for the ongoing operation and maintenance of the plant runs for 20 years, after which the plant will be transferred back to TWWC.

The renovation project cost an estimated 216 million RMB ($31.5 million) and was funded by Tyco Asia Investments – Tyco International being Earth Tech’s parent company. The entire contract to design, build, finance and operate the plant is valued at more than $400 million.

Located on northern China’s gold coast on the Bohai Gulf, some 140km to the southeast of Beijing, Tianjin is China’s largest port city and the country’s third largest city overall, being home to a population of more than 10 million. The burgeoning growth of China’s economy has driven a wave of urbanisation, drawing people from rural areas into the country’s major cities, but this has brought new infrastructure challenges in its wake.

Originally built more than a hundred years ago, the Tianjin Jie Yuan facility is the oldest of the three water treatment plants serving the central Tianjin area, drawing source water from the Luan and Yellow Rivers. Like many of China’s waterways, they have been contaminated by industrial effluent, leading the Ministry of Construction and Health to revise the country’s potable water standards twice in as many years, to try to address the nation’s water quality problems.

The pre-existing facilities at the plant were outdated and in poor condition, and it was clear that immediate action was needed to meet these new national drinking water standards. With Tianjin destined to be one of six Olympic co-host cities, and the municipality itself committed to providing world class infrastructure to underpin sustainable development, TWWC decided to upgrade the Tianjin Jie Yuan facility.

The joint venture between Earth Tech and TWWC was established in 2002, the company having been involved in previous consultations over the city’s water issues, including a serious algal problem two years earlier.

Because the existing facility had no room for expansion, the construction programme was forced to encompass partial demolition and the construction of new facilities without compromising plant operation. The refurbishment project itself called for the design and installation of a full DAF treatment process and sand filters, together with state-of-the-art dosing and control systems.

It also entailed an extensive training programme for the plant operatives responsible for running the new systems, both locally and at similar Earth Tech facilities in Europe and Australia.

In addition to expanding plant capacity from its original 300 ML/d, the new technologies installed as part of the upgrade have resulted in 30% less chemical usage in the treatment process – resulting in a better-tasting final product. As a result, the plant consistently exceeds the Chinese Government’s new higher quality standards.

“The new technologies installed as part of the upgrade have resulted in 30% less chemical usage.”

The new monitoring equipment and control systems that were put in place to extend plant automation, and enable operators to manage potential problems safely and swiftly, also help to reduce chlorine and ammonia releases from the facility. Effective monitoring has enabled a 50% reduction in turbidity, while the newly installed flow-meters have allowed some 10 million litres/day of water to be conserved that previously used to be discharged.

Establishing this level of process control called for the installation of a variety of pressure gauges, thermometers, pyrometers and gas-analysis apparatus.

The project was completed with no accidents among the workforce and, having received the Tianjin Construction Site award, it was subsequently nominated for the Hai He River Cup – given in recognition of the municipality’s best project.

The client was the Tianjin Water Works Company and Earth Tech was chosen to be the main contractor, its JV being Tianjin Earth Tech Jieyuan Water Co. Tyco Asia Investments – Tyco International is Earth Tech’s parent company – provided the funding for the upgrade project.