US Section of the International Boundary and Water Commission (USIBWC) 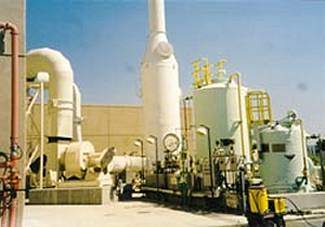 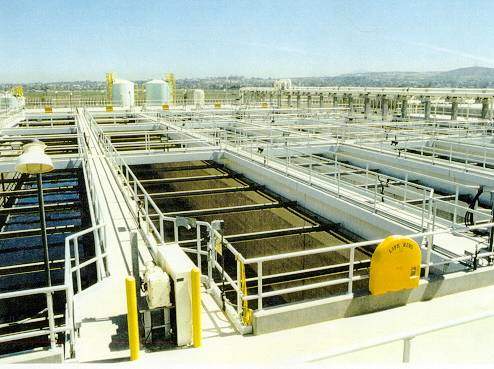 Water tanks at the Tijuana plant. 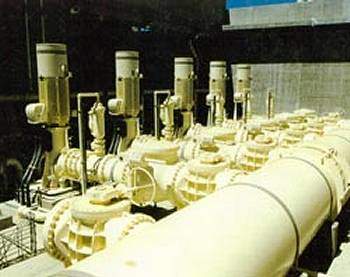 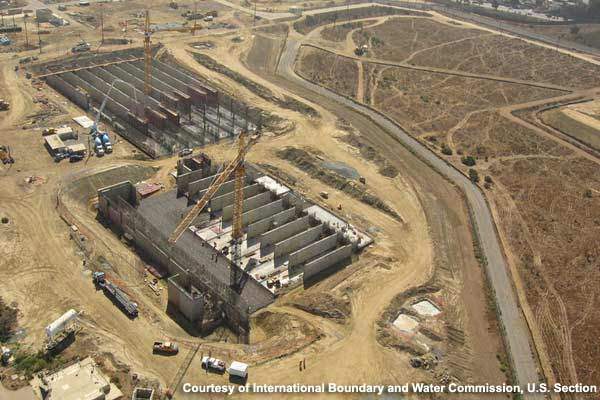 The project involves the construction of activated sludge secondary treatment facilities and the expansion of its capacity from 25mgd to 50mgd. 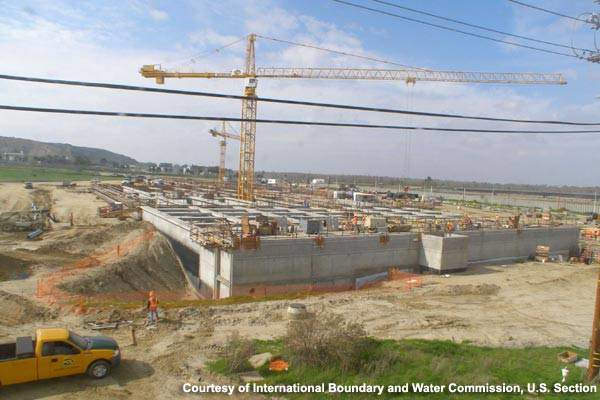 The SBIWTP upgrade was considered more beneficial than the Bajagua project. 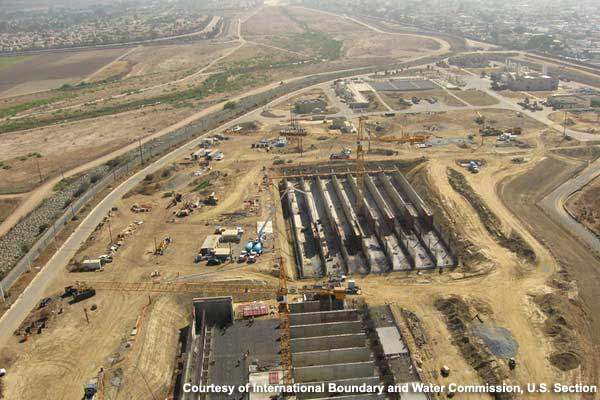 The existing SBIWTP being upgraded to secondary treatment level.

In 1994, the International Boundary and Water Commission (IBWC) began the construction of the International Wastewater Treatment Plant (IWTP) on a 75-acre site, west of San Ysidro in the Tijuana River Valley, on the US side of the Mexican border. The project, authorised by the US Congress in 1989 and formally agreed between the two countries in July 1990, was part of a regional approach to solve a long-standing problem.

Uncontrolled discharges of up to 38,000m³/day of raw wastewater from Mexico flowed down the Tijuana River and out through the National Estuarine Research Reserve to pollute the beaches of south San Diego County and Playas de Tijuana.

With a population then estimated in excess of 1.2 million and increasing at a rate of 6% a year, the local wastewater infrastructure in the Tijuana region was in need of a radical overhaul.

Completed in spring 1997, the official ribbon-cutting ceremony took place on 18 April and the plant came properly on-line in May. The plant is owned by the US section of the IBWC and operated by Veolia Water North America.

"The geographical proximity of the border communities of Tijuana and San Diego was the principal driver of the regional approach taken."

The original intention was to provide a plant capable of delivering consistent secondary treatment, with activated sludge selected as the preferred method. However, in the end, building the advanced primary facility alone exhausted the $239m of project funding.

The second element of the project started in 1995 when the city of San Diego commenced a federal government construction contract for the South Bay Ocean Outfall (SBOO). Combined trenching and boring techniques were used and more than 400,000t of rock was placed over a 1.5-mile section of exposed pipeline for protection.

Completed in December 1998 at a cost approaching $200m, the finished structure extends along the sea-bed near Imperial Beach emerging approximately 5.5km (3.5 miles) offshore at a depth of 30m (100ft). Currently, 95,000m³ (25 million US gallons) of effluent from the IWTP is discharged from it daily.

The outfall also discharges effluent from the South Bay Water Reclamation Plant (SBWRP), a facility which belongs to San Diego and was opened in May 2002. This plant has a wastewater treatment capacity of 56,000m³/day and was built to relieve the south Metro sewer interceptor system, provide local treatment services and supply reclaimed water to the South Bay area.

The Border Environmental Cooperation Commission (BECC) gave a grant of $17m towards the $143m facility. The projected cost had originally been estimated at $97m.

A series of upgrades were also made to the Tijuana sewage system, which included the construction of a new pump station and parallel force main. This phase of the work was completed in late 2000.

The geographical proximity of the border communities of Tijuana and San Diego was the principal driver of the regional approach taken. The project required close cooperation between a number of national, regional and local agencies in addition to the two municipalities themselves.

Six years after the IWTP’s completion, the situation was much improved. Sewer connections were extended to more than 85% of households in the Mexican border region and rogue discharges to the Tijuana River were significantly reduced. Back in 1990, San Diego agreed to treat up to 50,000m³/day of Tijuana sewage in the city’s Metro wastewater system as an interim solution to the problem until the proposed IWTP was constructed.

The initial agreement with the IBWC was signed on 22 July 1991 and although it has been extended annually ever since, this safeguard has not been used since September 2000.

The need for secondary treatment for the effluent produced at the plant remained unresolved until 2005. In the spring of 1998, the EPA carried out a Supplemental Environmental Impact Study regarding secondary treatment options and opened the issue for local consultation.

At the end of this process, the EPA and the IBWC selected a completely mixed aerated (CMA) pond system, to be sited at Hofer, as the long-term option to provide secondary treatment for the plant’s wastewater. With no funding for construction available, however, the effluent continued to be treated to advanced primary level and discharged.

"In 1994, the International Boundary and Water Commission (IBWC) began the construction of the International Wastewater Treatment Plant (IWTP) on a 75-acre site, west of San Ysidro in the Tijuana River Valley, on the US side of the Mexican border."

In February 2001 California’s Office of the Attorney General, acting on behalf of the California Regional Water Quality Control Board, filed a complaint in the US District Court.

It was alleged that the discharge violated federal and state water quality legislation and that failing to treat the effluent to secondary standards contravened the National Pollutant Discharge Elimination System (NPDES) permit originally granted to the facility. The matter is awaiting trial.

The IBWC announced, in late October 2003, that another Supplemental Environmental Impact Statement (SEIS) would be prepared to explore how best to stop violations of the NPDES permit. It explored a number of options, including the provision of secondary treatment facilities either at the plant itself or in Mexico and the transfer and treatment of the effluent to the Point Loma Wastewater Treatment Plant in San Diego.

Most of the comments received in response to the earlier consultation exercise were supportive of secondary level treatment ponds, largely based on lower capital and operational costs, together with their speed of construction. This approach, however, was not without its critics and there was no agreement as to which side of the border they would be best located.

In one proposal, Bajagua, a private Mexican company, backed by a group of American investors, suggested a public-private partnership in Mexico to construct and operate CMA ponds in eastern Tijuana.

However, the IBWC’s request for funding was turned down by the US Government and the preliminary project studies were put on hold. The IBWC Draft Final SEIS was prepared in July 2005. The IBWC decided to upgrade the existing South Bay International Wastewater Treatment Plant (SBIWTP) to secondary treatment level instead of constructing the Bajagua project. The upgrade project was deemed to be more economical and less time consuming to achieve the clean water compliance.

In November 2008, the contract for the upgrade of the SBIWTP to secondary standards was awarded to S&B Infrastructure with PCL Construction as the civil works contractor, for $92.7m. The project involved the construction of activated sludge secondary treatment facilities.

On-site works of the plant upgrade began in January 2009. The secondary treatment facilities came on line in November 2010 and the entire project, including landscaping and irrigation systems, was completed in May 2011.