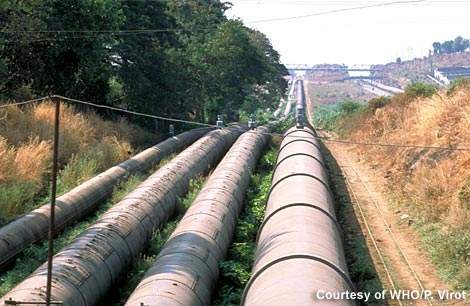 India is no stranger to large water transmission schemes - 55km of new pipeline were constructed as part of this project. (Photograph courtesy of WHO/P. Virot) 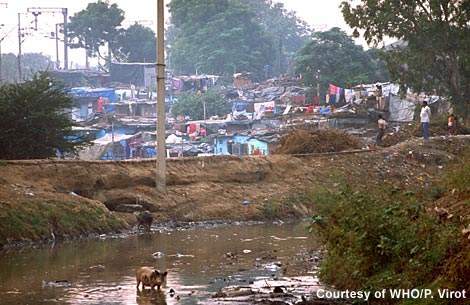 Available water supplies for many of India's poorest are often very badly contaminated. For the first time, this project enabled local residents to benefit directly from the regional industry's need for reliable water services. (Photograph courtesy of WHO/P. Virot) 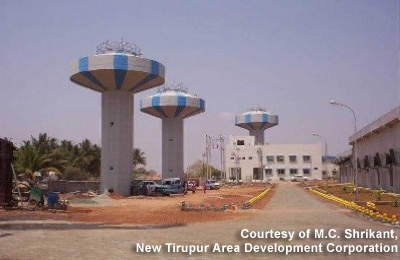 The new water plant: built to a conventional design, it has a capacity of 185 million litres per day. (Photograph courtesy of M.C. Shrikant, New Tirupur Area Development Corporation) 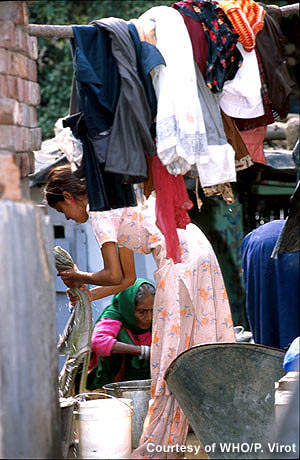 Some 2,500 textile businesses are located within a 25 mile radius of Tirupur, making it India's largest producer of cotton knitwear and accounting for over 75% of the country's knitwear exports. (Photograph courtesy of WHO/P. Virot) 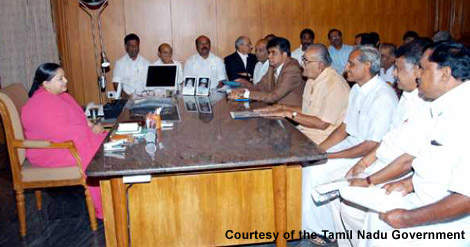 The chief minister of Tamil Nadu, Ms J. Jayalalithaa, meeting with representatives of the textile industry. The project used cross subsidies from the textile units to help make the service provision for local residents possible. (Photograph courtesy of the Tamil Nadu Government)

Drawing water in one of the slum areas. The project represents a major step forward for a country where so much of the population has limited access to safe drinking water or sanitation. (Photograph courtesy of WHO/P. Virot)

In 2006, the recently completed Tirupur water system – the first public-private partnership project in the history of India’s water sector – gained a distinction in the industrial category of the Global Water Awards, being highly commended by the judges.

The project involved the construction of two new treatment works, ultimately providing the area with a daily supply of 185 million litres of potable water and the capacity to treat 30 million litres of domestic sewage.

Out of the two schemes, one is maintained by the Tirupur Municipality (TM), which supplies seven million litres of water per day.

The other scheme is maintained by the Tamil Nadu Water Supply and Drainage Board (TWAD), which provides 24 million litres of water per day. The rest of the water is supplied by 44 village panchayats.

In addition to the plants, the scheme also required the construction of an intake structure downstream of the Bhavani-Cauvery river confluence, 55km of transmission pipeline, a system of 25 reservoirs, a master balancing reservoir and a distribution and sewer network.

The Mettupalayam Water Supply scheme is being built 54km away from Tirupur. It is estimated to meet the water requirements of 300,000 population and is scheduled to be opened by 2011.

The Tirupur project funding was a mixture of debt and equity, an approach which involved a number of sources including public money, various commercial interests, financial institutions and international funding agencies.

Assistance came from the Infrastructure Leasing and Financial Services (IL&FS) and from the US Agency for International Development (USAID) with loan guarantees over 30 years for $25m. The project came in on its $220m budget.

Tirupur is located in Tamil Nadu state and is India’s largest producer of cotton knitwear. With over 2,500 textile businesses located within a 25-mile radius, earning some $1bn, the region – one of the most economically dynamic in Southern India – accounts for over 75% of the entire country’s knitwear exports.

“The project will provide a daily supply of 185 million litres of water.”

Water is essential to the industry, and historically groundwater and tankers have been extensively used to overcome the city’s lack of supply.

However, the industry has heavily polluted the groundwater with chemical dyes; it has been said – and not entirely frivolously – that the colour of the region’s water varies with the mood of Paris fashions.

By 1990, the groundwater had become progressively more saline and contaminated, and the need to address the situation had become of pressing regional importance. This ultimately led to the instigation of the project.

While the need for an improved water system was clear, the challenge was financing it. Ultimately, this required the formation of a Special Purpose Vehicle (SPV) to access commercial funding and implement the project. In 1995, the New Tirupur Area Development Corporation Limited (NTADCL) was formed for the role and subsequently began the process of international competitive tendering.

Since the municipal area also lacked an organised system of drainage, sewage collection or treatment, it was decided to address both this and the provision of potable water, as part of the Tirupur Area Development Project. An associated wider scheme of works also encompasses additional local infrastructure requirements including roads, telecommunications and power.

The project itself was split into three separate contracts, two awarded on a engineer, procure and construct (EPC) basis and one to operate and manage (O&M) the finished facility.

“The system serves nearly 1,000 textile units and over 1.6 million residents in Tirupur and its surrounding areas.”

The fully operational system serves nearly 1,000 textile units and over 1.6 million residents in Tirupur and its surrounding areas.

A daily total of around 125 million litres of water is supplied to the knitwear dyeing and bleaching industry, 25 million litres to the Tirupur municipality, which includes 60,000 slum dwellers and 35 million litres is shared between the region’s remaining rural towns, villages and settlements.

Around 2,000 lorries make seven to ten trips a day to supply water to the textile industry. Households get water supply for two hours on alternate days.

Sanitation provision within the scheme includes 100 of the city’s designated slum areas. The water treatment plant was built to a conventional design, using a rapid gravity filter with a lamella clarifier to provide the 185 million litres per day capacity.

The wastewater facility takes domestic sewage only and uses an activated sludge system to achieve secondary treatment standards. The plant discharges into Noyyal river. Initially built with a capacity of 15 million litres per day, its design allows eventual expansion to double that, when sewer provision is extended to the remaining 15 of the town’s 52 wards.

Although the construction elements of the project were implemented in two parts, their execution was effectively simultaneous. The EPC I work involved building the water intake, the transmission pipeline from the river to Tirupur and the master balancing reservoir, while the EPC 2 contract, covered the main feeder pipelines and distribution networks, overhead and ground level storage tanks and the sewerage network in the Tirupur town area.

Once the construction work was completed and the master balancing reservoir linked to the distribution network, Mahindra Water Utilities’ 30-year O&M contract came into effect.

NTADCL was the SPV and project sponsor. The EPC1 contractor was the Hindustan Construction Company, with a Mahindra & Mahindra / Larsen & Toubro joint venture responsible for the EPC2 contract. The O&M contractor is Mahindra Water Utilities Ltd – a Mahindra/United Utilities JVC.

Other partner institutions in the project included the Tirupur Municipality itself, Tirupur Exporters Association (TEA), Infrastructure Leasing and Financial Services (IL&FS), The Tamil Nadu Corporation for Industrial Infrastructure Development (TACID) and the Indo-US Financial Institutions Reform and Expansion (FIRE). In addition, USAID and the World Bank have also committed themselves to providing long-term aid.