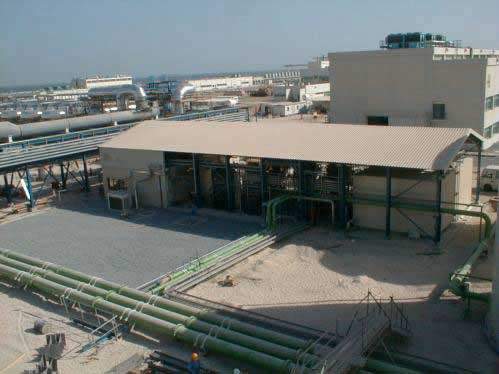 The Umm Al Nar Power Company is the largest single producer of water in the United Arab Emirates. 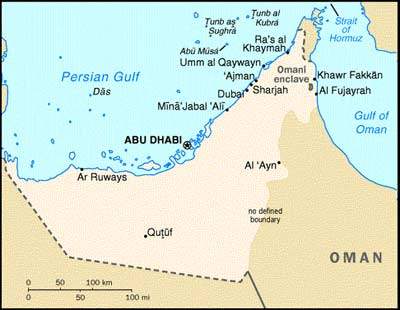 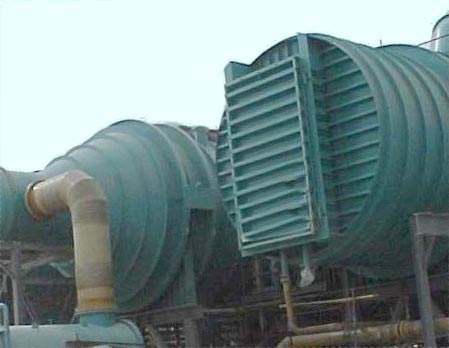 One of the older desalination units at the plant. When the new extension is completed, the units which have not been integrated in the design will be removed and decommissioned. 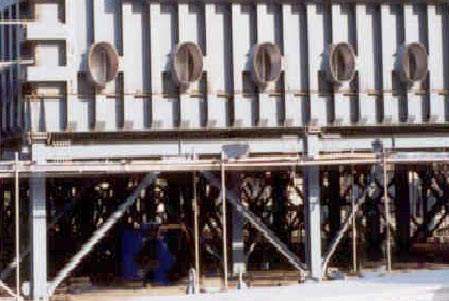 One of the MSF evaporators. Special resistant coatings and alloys were used extensively to avoid scaling and accelerated corrosion. 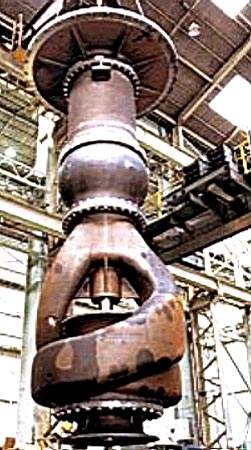 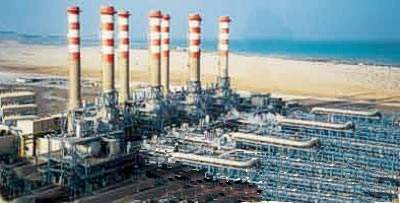 The acquisition of 40% interest by the International Power led consortium is part of the privatisation process of Abu Dhabi's power and water industries. 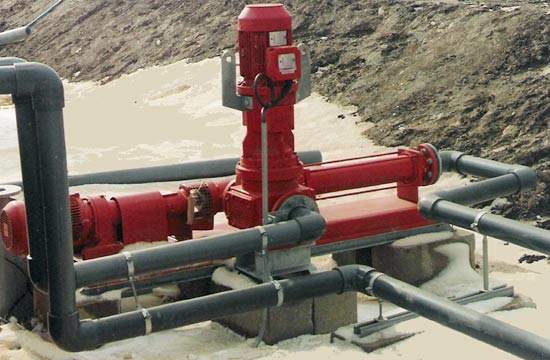 A total of 72 pumps were supplied, including 25 small flow rated units like this one.

On 2 July 2003, International Power (IP) announced the successful conclusion of negotiations to finance the acquisition and expansion of the Umm Al Nar power and water desalination plant as part of Abu Dhabi’s power and water privatisation process.

The IP-led consortium, which includes Tokyo Electric Power Company (TEPCO) and Mitsui, acquired a 40% equity interest in the facility from the Abu Dhabi water and electricity authority (ADWEA) to form a new joint venture, the Arabian Power Company (APC). The remaining 60% of APC is owned by a holding company, itself wholly owned by ADWEA.

The consortium also signed a ‘take-or-pay’ power and water purchase agreement with the Abu Dhabi Water and Electricity Company (ADWEC) to cover the entire output over a 23-year period.

This contract covers both the current output of the existing Umm Al Nar plant and the entire output from the new plant. The power plant and the desalination plant began commercial operations in July 2007.

The total project cost, comprising the cost of both acquisition and the expansion, was $2.1bn. Funding was a mix of non-recourse project finance debt, shareholder equity and revenue from the operation of the existing plant.

A number of banks were involved in the $1.77bn total financing package, which consisted of both conventional long-term and short-term debt and an Islamic loan facility, arranged by the Abu Dhabi Islamic Bank.

The consortium’s total equity commitment is an estimated £112m, shared between the partners in line with their ownership of the consortium investment company – 50% International Power, 35% TEPCO and 15% Mitsui.

Located on the Umm Al Nar island, 12 miles to the east of Abu Dhabi city, the existing gas-fired plant has an installed power generation capacity of 850MW and uses five 57,000m³/day multi-stage flash distillation (MSF) units for desalination. Much of this installation was shipped pre-assembled from South Korea, to enable the original short time-frame to be met.

The inherent efficiency of MSF, combined with the relatively low maintenance demand of these plants, makes them particularly suited to the large-scale applications required in the Middle East.

In addition, the marked drop in price of the units over recent years has made them very commercially competitive. Although reverse osmosis plants occur in greater numbers, over 85% of the world’s desalinated water comes from MSF systems.

The process is based on a very simple principle. Low grade steam from the adjacent power plant heats the tubes within the distiller units’ brine heaters, which in turn heat the seawater intake.

The heated seawater then passes into a low-pressure vessel, where it boils rapidly, ‘flashing’ into steam. This then condenses on heat exchanger tubes, which are cooled by the incoming feed water flow to the brine heater.

The intake flow itself is warmed by the thermal gain from the condensing steam, which helps to reduce the amount of energy needed in the brine heater.

In practice, however, only a small amount of the incoming seawater is converted to steam, since vaporisation soon causes the water to cool to below boiling point. By repeating the process over a number of stages, set at progressively lower atmospheric pressures, the feed water passes from one to another, flashing repeatedly, without the addition of further heat.

There are constraints on the number of stages, since the temperature difference between the brine heater and the final condenser at the cold end of the plant is one of the major factors affecting the thermal efficiency of MSF plants.

Increased efficiency can be achieved by operating at the upper temperature limit of 120°C, but at the risk of increased detrimental scale formation and accelerated corrosion of metal surfaces. To overcome these potential problems, Umm Al Nar was designed to optimise MSF performance to the power plant cycle and extensive use has been made of corrosion-resistant coatings and alloys.

As a result of the recent agreement, a new gas fired power and MSF desalination plant was developed adjacent to the existing facility, with an installed power capacity of 1,550MW, capable of producing 113,600m³/day of water. It was constructed using GE9FA turbines, making it the first facility in the Gulf region to use GE’s Frame F turbine technology.

The plant is 60% owned by ADWEA through a holding company, with the remaining 40% equity held by the IP Consortium, which consists of International Power, Tokyo Electric Power Company and Mitsui.

“It was constructed using GE9FA turbines, making it the first facility in the Gulf region to use GE’s Frame F turbine technology.”

International Power owns 50% of the consortium investment vehicle, which equates to 20% interest in the plant.

White & Case were legal advisors to ADWEA during acquisition and Trowers & Hamlins acted for the IP Consortium. Mott MacDonald was the owner’s engineer for the project.

The turnkey contractor for the original plant was Doosan Heavy Industries (DHI).

DHI used its own technology in the manufacture of the plant’s distribution control system (DCS) and interface panels.

Arabian Construction Company was the civil and structural steel contractor on the original plant. The site work, logistics and local fabrication was done by IHI UAE. Torishima supplied the pumps and Hyundai Heavy Industry the large-capacity motors.