The Water Corporation of Western Australia 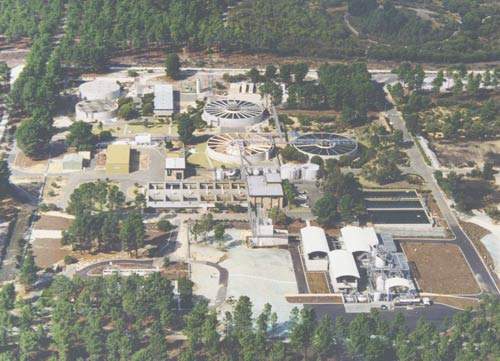 Aerial photograph of the whole Wanneroo plant; the MIEX plant is visible in the bottom right hand corner. 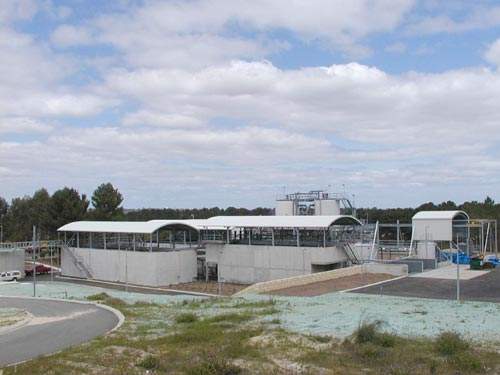 The MIEX plant viewed from the east; the contactor tank is in the middle and the three settler tanks are to the left. 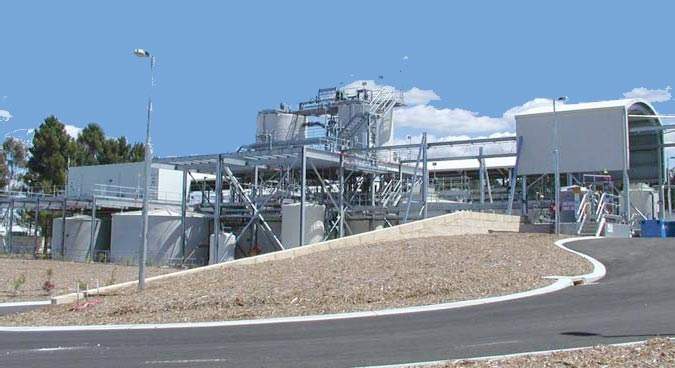 The west side of the plant, showing the regeneration vessels and the fresh resin tank. The taller central structure houses the regenerant tanks. 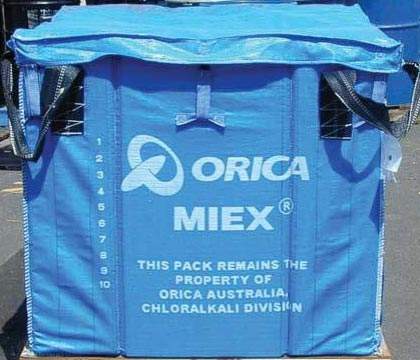 MIEX resin delivery pack. The resin used at the plant was manufactured at a specially commissioned pilot factory near Melbourne.

On 3 May 2002, the Premier of Western Australia, Dr Geoff Gallop, formally opened the world’s first large-scale MIEX (magnetic ion exchange) facility, built to upgrade the facilities at the existing Wanneroo WTP. The Water Corporation of Western Australia awarded the EPC contract to Black and Veatch Australia in 2000, construction began in December 2001 and the new facility passed the required performance test the following March.

The process was originally developed by the Commonwealth Scientific and Industrial Research Organisation (CSIRO), the South Australian Water Corporation and Orica Australia, with the Water Corporation of Western Australia instrumental in further refining it for large-scale application.

Designed to treat 112,000m³/day – roughly half the Wanneroo WTP’s peak capacity – the MIEX plant cost AU$15 million and formed part of a major water supply improvement programme in the Perth area of Western Australia totalling an estimated AU$500 million between 1998 and 2002.

Anion exchange provides an alternative to the use of granular activated carbon adsorption and nanofiltration for the removal of naturally occurring organic matter, which plays a significant role in the creation of disinfection by-products (DBPs). Based on the success of Wanneroo, and in the wake of regulatory changes in respect of DBPs, a number of pilot studies took place in the US during 2003 to investigate the potential applications of the technology.

Water quality standards across the world increasingly set higher targets for pathogen removal, while also demanding lower residual concentrations of DBPs. These are produced by the reaction of chlorine with organic molecules and include trihalomethanes (THMs), haloacetic acids (HAAs) and a range of other halogenated compounds. Any organic molecule in water can provide DBP precursor and the variety of such naturally occurring material changes both seasonally within a given water source, as well as from water to water. This inevitably leads to variable reactivity with disinfection chemicals such as chlorine or ozone.

The MIEX process is a novel ion exchange approach specifically developed for the removal of the dissolved organic content (DOC) from water. Central to the system is a micro, strong base, magnetic ion exchange resin, which was specially developed and optimised for DOC removal. The particles of this resin are very small – around 150µm to 180µm – giving a high surface area which promotes rapid adsorption and, in addition, contain a magnetised component allowing the particles to act as weak individual magnets. These unique properties make the MIEX process significantly different from other conventional ion exchange approaches.

While the internal surface area of the MIEX resin is very similar to that of other macroporous resins, the smaller particle size gives greater resistance to fouling. The magnetic properties of the individual beads lead to the formation of large, heavy agglomerates that facilitate recovery and reuse of the resin through multiple regeneration cycles, which improves the overall cost-efficiency of the process. In addition, the resin’s high physical stability means that it can withstand pumping with minimal structural damage.

In operation, a small volume – 5ml to 20ml per litre of water – of magnetised anion exchange resin is applied to the raw water in a mixed flow reactor tank, with a detention time of between 5 and 30 minutes.

The resin is then recovered in a high-rate settling basin where the flocculation agglomerates formed enable better separation, settled resin being pumped back to the reactor as a concentrated slurry. Between 5% and 10% of the reclaimed resin is removed on a continuous basis from this return stream for regeneration with sodium chloride.

This new approach to ion exchange has several advantages over traditional fixed-bed designs. The use of mixed contactor tanks eliminates the need for pre-treatment for particle removal, allowing effective DOC removal to take place before the addition of coagulants. This typically leads to a significant reduction in the coagulant dose required. In addition, the use of magnetised anion exchange particles means that recovery can take place during settling, without the need for further coagulant or filtration, both of which would complicate reclamation.

Water flows from the aerator through the MIEX plant by gravity, with a total head loss of 2.4m. To provide the subsequent 4m lift necessary to enable a resumed gravity flow through the remainder of the pre-existing treatment elements – alum coagulation/clarification and dual media filtration – a new pump station was constructed at the MIEX outlet.

Since commissioning, the plant has successfully controlled DOC and sulphide levels in the treated water, leading to a significant reduction in downstream coagulant and chlorine usage. Both the reduced DOC and lower chlorine demand contribute to lower DBP production and reduced coagulant use has led to a corresponding drop in the amount of alum sludge produced.

This success led to an American Water Works Association Research Foundation (AWWARF) study to investigate the effectiveness of the process for treating a broad range of water qualities across the US. Four test locations were selected: Maytum WTP in New Port Richey, Florida, Hanahan WTP in Charleston, South Carolina, Fort Thomas WTP in Kentucky and Alfred Merritt Smith WTP in Las Vegas, Nevada. Their different treatment requirements were chosen to provide a broad basis for the evaluation.

Performed over a four-week period, the testing used a 2.5m³/h skid-mounted pilot plant. The preliminary results suggest that MIEX performed well in DOC removal, but that in this study its performance in total DBP reduction may depend on bromide levels. Further work is expected to follow to investigate the process as an integrated component of a larger treatment sequence.

The Australian developers of the MIEX technology had always considered the US market as offering the greatest potential for commercial application. In the light of recent US legislation which reduced the THM standard from 100µ to 80µg/l, together with the growing interest from AWWARF and other interested parties, the coming years may bring the realisation of this potential.