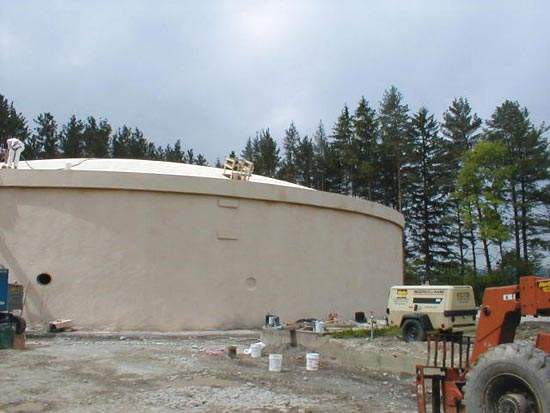 The main element of the expansion involved the construction of two new concrete reservoirs for finished water. 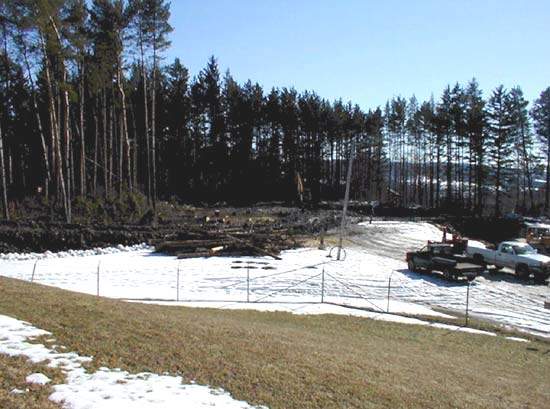 Construction was done in separate phases, the first tank being built on a newly prepared site close to the existing plant. 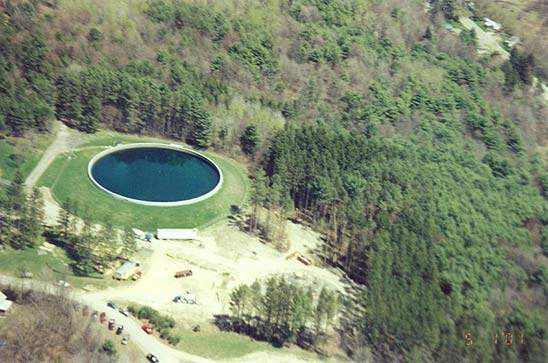 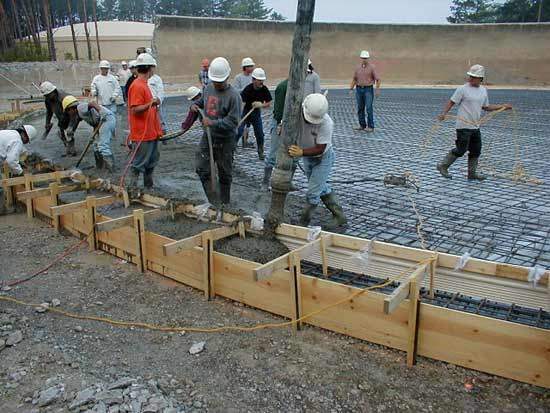 Pouring the floor of each new reservoir took around six and a half hours to complete. 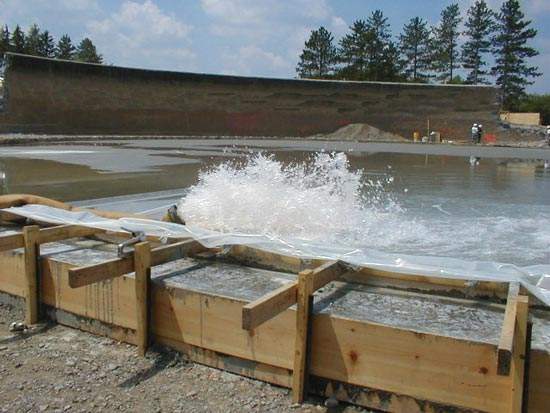 Once poured, the base slab was flooded to ensure slow curing and maximum final strength. 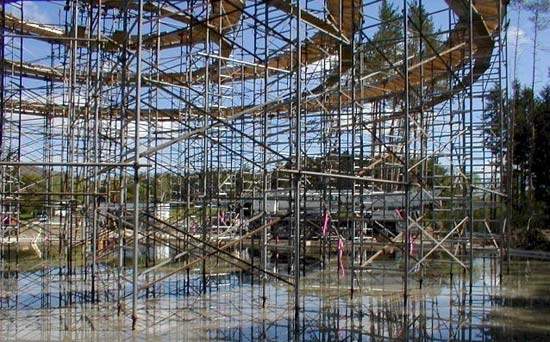 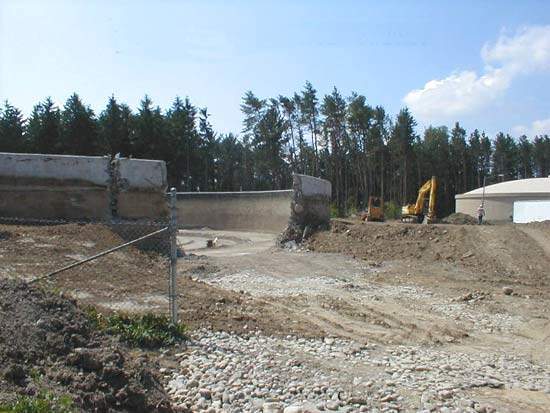 The second new concrete tank was constructed at the site of the dismantled old reservoir. 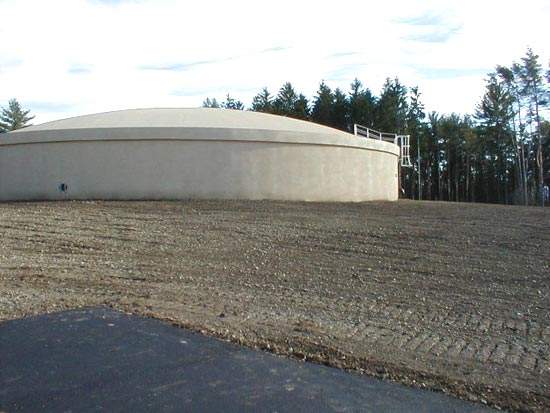 Initial site restoration and landscaping work was completed within a month of the second tank being brought into use. 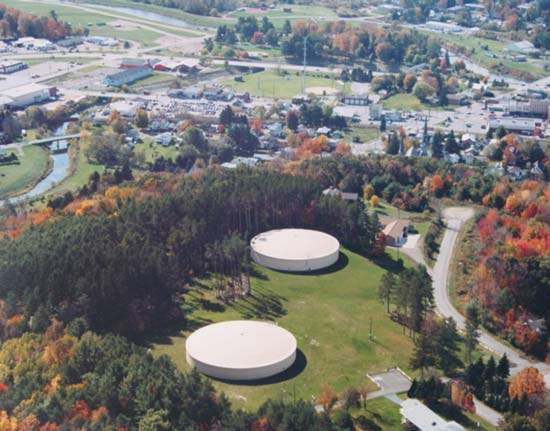 Arial view of the finished site, showing part of the plant itself, the two new reservoirs and completed landscaping.

In 2001, the Wellsville Water Department implemented a programme of upgrades, awarding the contract for the main element of the work to Natgun Corporation on 20 February. This comprised the construction of two new finished water reservoirs at the Wellsville Water Treatment Works to replace existing storage arrangements.

The facility can process up to 11,350m³ (3 million US gallons) of water per day from the Genesee River, although the actual amount entering the system is typically only around a third of this.

It had an original total holding capacity of 16,000m³, comprising an 11,350m³ open air reservoir, 2,850m³ steel tank and a 1,800m³ clear-well. However, this was reduced when the steel reservoir suffered structural damage in the autumn of 1997 and was subsequently taken out of service and demolished. This, combined with the age and open-air nature of the remaining reservoir and the needs of planned future service expansion, led to the decision to commission two new, concrete structures, each having a capacity of 7,500m³.

The expansion work also involved the demolition of the plant’s original reservoir, the replacement of some existing pipe-work, the construction of a number of new service mains and the installation of an in-line chlorine analyser for constant monitoring.

Improving storage and extending the provision of supply at Wellsville has a budget costing of just over $2.5 million from the New York State Drinking Water State Revolving Fund.

The construction of the two reservoirs was done in separate phases. The first was built near the site of the plant’s old steel tank. Once it was completed and brought into use, the existing open-air reservoir was drained and dismantled to provide the site for the second new structure.

With an immediate population of around 5,700, rising to nearly 9,000 with the inclusion of the outlying areas, Wellsville is the largest municipality in Allegany County. Since the average daily water demand is around 3,000m³, the single new reservoir was able to service the needs of the community adequately during the second construction phase.

Preparation of the site began on 4 April 2001. After this had been completed, formers for the side panels were put in place and the side and top panels were pre-cast on-site for later use.

The first reservoir’s floor was poured on 25 April and took six and a half hours to complete. The concrete base was then flooded with water so that it would cure slowly for maximum strength. The concrete panels were assembled, with scaffolding to support the sections with a series of wooden rings being used to hold the overlapping reinforcement rods and act as dome supports. Concreting the gaps between the sides and individual roof panels began on 10 May.

Subsequently, the structure was extensively wrapped with steel pre-stressing wire for reinforcement and a number of layers of shotcrete applied to its inner and outer surfaces before it was finally painted, cleaned and disinfected. After meeting water quality requirements and passing 24- and 48-hour leak tests, the new covered reservoir was brought into service on 26 June.

With the first tank operational, the old open-air facility was taken out of service, drained and dismantled, freeing up the site for the second concrete reservoir. Construction of this, which is twin of the first and built in the same fashion, began on 20 July. The floor was poured on 1 August, the building work completed on 2 October and the reservoir was brought on-line on 19 October. Site restoration and landscaping finished on 13 November.

The programme of refurbishment continued throughout 2002-3 with a number of ancillary additions to the water treatment plant. The process of water treatment itself has been unaffected by the expansion and still comprises the original steps of filtration, disinfection, pH adjustment, fluoridation and corrosion control treatment.

A new chlorination system was installed in 2002 to improve primary disinfection; the use of additional chlorine during storage has been stopped, since the two new reservoirs are covered rather than open to the air. During this period, the treatment facility has also undergone a full energy audit and had new compressors, lighting and security systems fitted.

Various works have also been undertaken to enhance the supply infrastructure, principally consisting of the construction of further new mains to extend service, together with replacements or repairs to valves, fire hydrants and existing pipelines.