Completion of the Water Reclamation Facility

Anticipated sludge production at start up 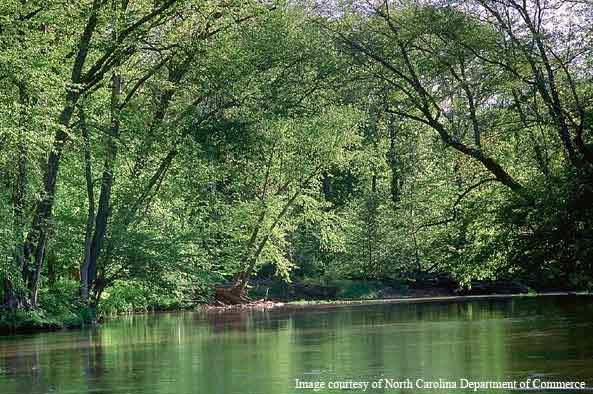 The Eno River, Durham. The waterways of North Carolina are an important part of the state’s economy, so protecting their long-term quality was one of the main drivers on the project. 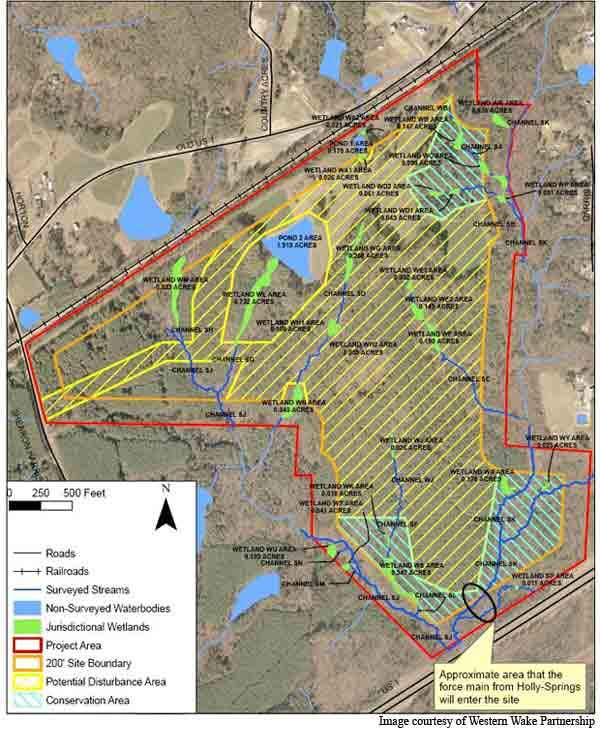 Aerial view of the new regional facility site, with the plant details superimposed. 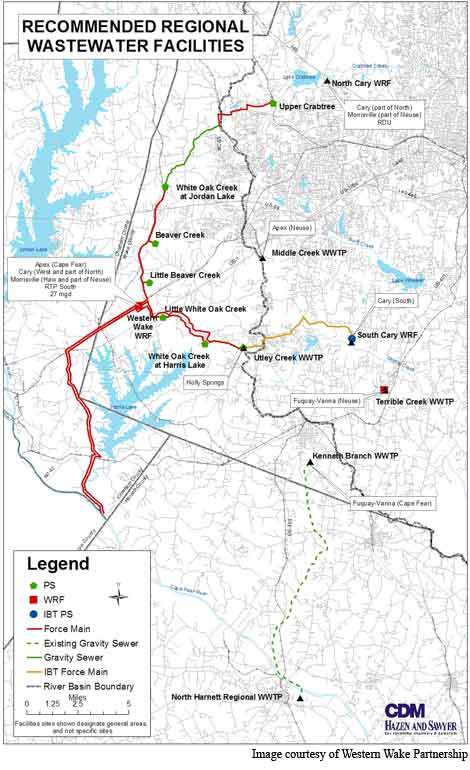 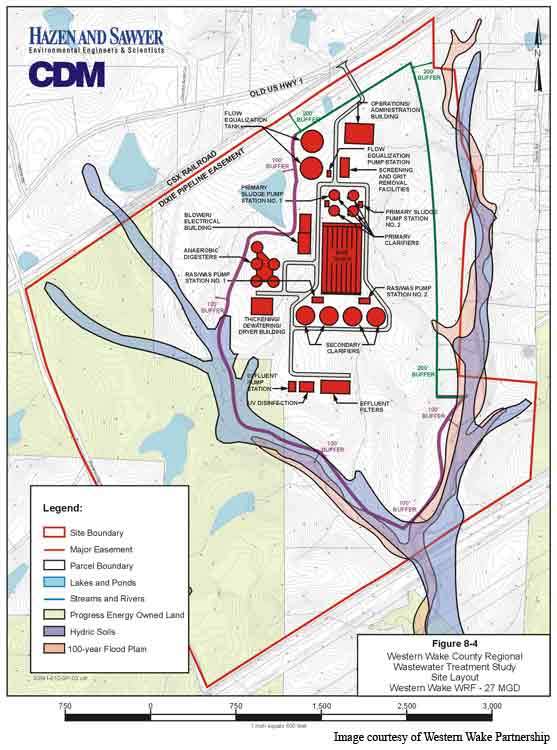 Site layout. The scheme is being implemented in two phases. 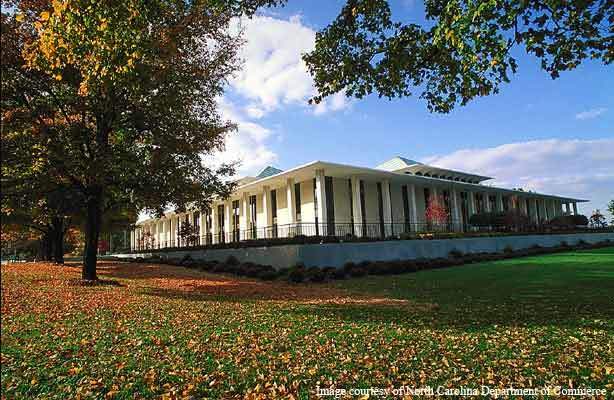 The State Legislative Building. North Carolina's requirement that cleaned wastewater be returned to the Cape Fear River basin by 2011 was a significant driver on the regional project. 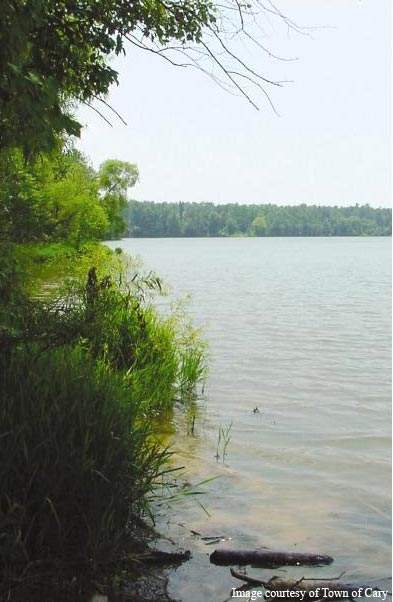 The growing population and economy of the region has driven a variety of initiatives to ensure the sustainable long-term use of local water resources. 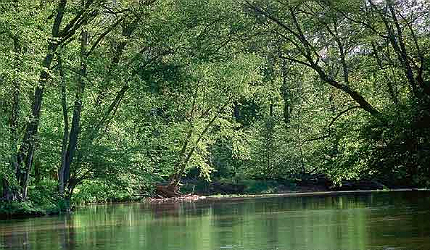 The new Western Wake water reclamation facility forms the central element in a major scheme intended to provide a regional wastewater treatment solution, to meet the needs of the area’s growing population through to 2030.

The project represents the culmination of extensive collaboration between a variety of state and county authorities and was implemented as a co-operative partnership of four local towns, namely Apex, Cary, Holly Springs and Morrisville, led by Cary.

In addition to the construction of the new treatment works, the plan also requires the expansion and rehabilitation of an existing WWTP, the provision of three new pumping stations, two force mains, an interconnecting sewer system and a new discharge point.

The total project cost is estimated to be $380m.

"The new Western Wake water reclamation facility, which forms the central element in a major scheme intended to provide a regional wastewater treatment solution, was completed in 2014"

Regulatory, economic and demographic factors have all acted as drivers for the project.

Under the terms of an inter-basin transfer certificate issued by North Carolina, cleaned wastewater was returned to the Cape Fear River basin by 2011. The existing plants that serve the towns of Apex, Cary, Morrisville and part of Wake County discharge into the Neuse River basin, making the construction of new facilities crucial to meet this new requirement.

State regulators also actively encouraged Holly Springs to change from its discharge point at Utley Creek to the main body of the Cape Fear River.

The economic vitality of the region also led to an increasing number of businesses and people relocating to Wake County, which is home of the state’s Research Triangle Park with its universities, high-tech industries and corporate headquarters. The needs of the expanding population during the next quarter century, even if modelled at a relatively slow rate of growth, would place significant demands on the existing infrastructure.

Continued industrial and residential growth has been forecast, particularly in the western portions of the local towns and along a number of the major interconnecting routes. To convey wastewater eastwards from these growth areas to the existing treatment plants – many of which have limited scope for expansion – would be both costly and difficult to achieve.

With the rational use of water resources widely accepted as one of the key factors in the long term sustainability of the region, the challenge was to provide cost-effective services while protecting the community’s quality of life. Against a background of the state regulatory agencies’ preference for regional wastewater management planning, the idea of a centralised solution began to take root, not least since the alternatives seemed likely to have greater environmental impact than a single new facility.

Facing the common problem of impending capacity shortfall, six of the county’s local governments worked together from May 2002 to July 2004 to investigate the possible options for a regional solution to meet their needs. The study programme began with a review of 24 potential schemes, before selecting seven for further detailed evaluation and examining the financial impacts and alternative organisational models for the development.

At the end of the process, four of the six local authorities decided to go ahead with the construction of regional wastewater management facilities, joining together to form the Western Wake Partners to progress the project.

Implementation of the Western Wake project

The new Western Wake water reclamation facility itself formed the main element of the project and accounted for slightly more than $190m of the project budget.

"Under the terms of an inter-basin transfer certificate issued by North Carolina, by 2011 cleaned wastewater must be returned to the Cape Fear River basin."

Designed by Arcadis, responsible for devising a highly successful WWTP for Cary in the mid-1990s, the plant is a state-of-the-art facility offering biological nutrient removal, filtration, UV disinfection and biosolids treatment to ensure the required effluent quality is maintained. The initial plant design provides a capacity of 18mgd, with the potential for expansion to 30mgd in the future.

Sludge treatment involves a 20-day period of mixed aeration within aerobic tanks and then ultimately either tankered off-site for further processing, or sent to landfill.

In addition, three new pumping stations at West Cary, Beaver Creek and the plant, as well as two new force mains and an outfall to Cape Fear River were constructed, along with interlinking pipelines and improved gravity sewers.

The scheme is being implemented in two phases. The $250m Phase I was intended to meet the needs of the partner towns until 2020. It provided a 24mgd discharge capacity to the Cape Fear River below Buckhorn Dam to comply with the terms of the state’s inter-basin transfer certificate.

Phase I construction works started in September 2011. By December 2011, clearing and grading of the access road to the site from Shearon Harris road was completed. The water line extension project at Apex’s Church Road, which provides water service to the reclamation facility, was also completed.

All construction works were completed by 2014. Scheduled for completion by mid-2020 and costing a further $120m, phase II will increase the discharge capacity to 38mgd and meet the projected demands of the region for the following ten years.

The project partners are the towns of Apex, Cary, Holly Springs and Morrisville. Cary is the lead partner. Wake County and Fuquay-Varina were also key participants in the two-year study process which ultimately led to the decision to move forward with the regional approach. The consulting engineers are CDM and Hazen & Sawyer; CH2M HILL and Arcadis are responsible for the plant design.

Crowder Construction Company is the construction contractor for the water reclamation facility. Construction of the Beaver Creek pump station and Olive Chapel Road Waterline has been contracted to PC Construction.