Discharge to river via weir chamber 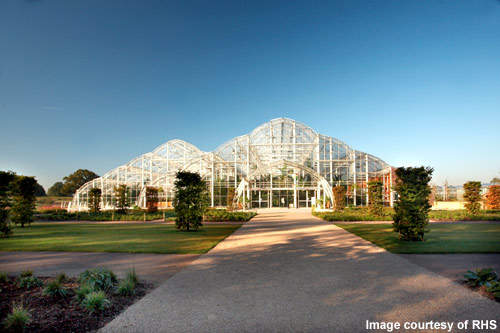 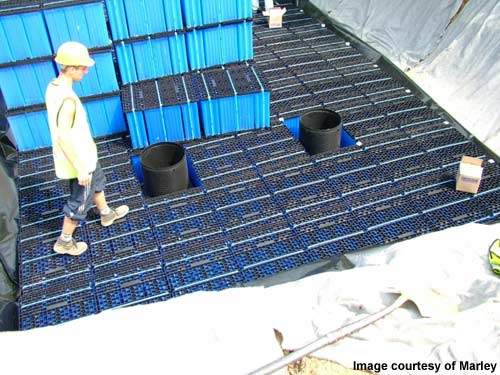 The storage tank was constructed from three layers of Waterloc cells. 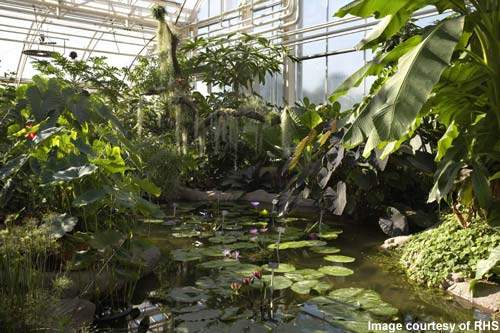 A view inside the Wisley glasshouse. 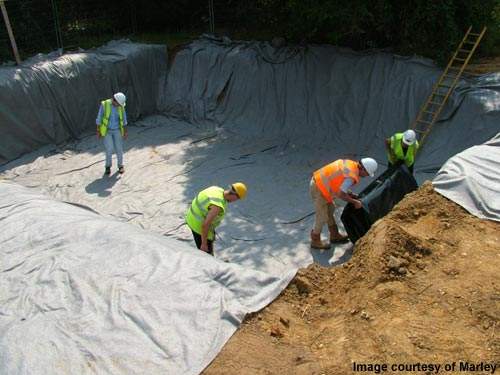 Work underway on the reservoir tank. 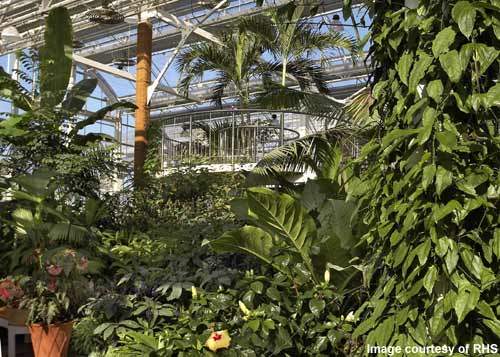 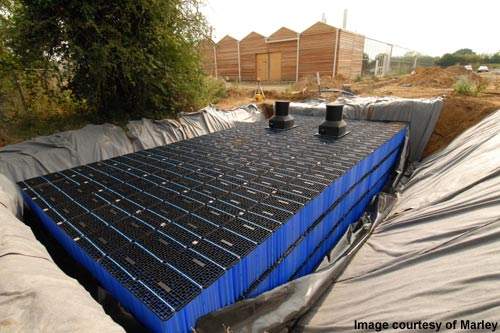 The finished tank prior to being covered.

The award-winning glasshouse at Wisley, Surrey, was built to celebrate the bicentenary of the Royal Horticultural Society (RHS) and to replace the charity’s ageing display glasshouse, which closed in 2006 after 36 years of service.

Officially opened by HM the Queen in June 2007, the £8.5m glasshouse features a series of green designs that saw it win the Heritage and Environment Award for New Building Design.

The construction project called for a purpose-built solution to collect, store and re-use rainwater – which would ordinarily have been lost into the drainage system – to meet the irrigation needs of the greenhouse’s array of plants.

The rainwater harvesting and irrigation system is based around a 54m3 storage tank. Constructed from three layers of Waterloc cells, the tank holds run-off from the glasshouse structure with rainwater passing through a silt-trap before entering a bank of three self-cleaning filter units.

“The building houses over 5,000 plants and can accommodate 750 people.”

The filtrate then enters the base of the tank installation, mixing and aerating the water already in store. Two submersible pumps located in service chambers pump the water into the glasshouse to irrigate the plants.

Unused water or excess flow arising from pump failure or heavy rain is discharged into the lake, overflowing into the river if necessary via the weir chamber.

At the heart of the system lies a Marley Waterloc. The design combines columns of hexagonal extruded polypropylene to form a honeycomb structure (an approach already well established for stormwater storage applications) with injection-moulded grids. This feature, with a porosity of 96%, provides a rapid dispersion capability.

The Waterloc cells weigh around 10kg each but can withstand a vertical loading of sixteen tonnes per square meter, making the system well suited to being buried beneath pedestrian or trafficked areas.

The glasshouse is surrounded by a new 1.3 million gallon (six million litre) lake which acts as a reservoir for the Wisely garden and holds enough water to keep it supplied for an estimated two months. As well as providing a storage facility and a major feature in the landscape, the lake has been designed to encourage native wildlife.

There are three distinct planting areas within the glasshouse – a dry temperate zone to the west side, a moist temperate zone on the east containing a variety of tree ferns and other suitable plants, and a tropical zone designed to mimic the humid conditions of a rain forest. Each has its own particular irrigation needs, which had to be taken into account at the planning stage.

“The site also boasts teaching gardens, together with the UK’s first root zone.”

The temperate zones are maintained at 8-12°C (46-54°F), with the tropical zone never falling below 20°C (68°F). A gas boiler provides heat, while thermal shading screens helps to avoid heat loss at night. Humidity is maintained as required – with relative humidity of 65-70% in the tropical area – by an automatic misting system, with photovoltaic panels providing electricity for the glasshouse and café.

Designed from the outset to further horticultural education, the site also boasts teaching gardens, together with the UK’s first root zone – an interactive area housed in an artificial cavern – to demonstrate the importance of the soil environment.

The building houses over 5,000 plants and can accommodate 750 people with an additional 1,500m2 of behind-the-scenes growing space provided away from the main public areas.

The RHS was the project sponsor, with the rainwater harvesting system provided by Marley Plumbing and Drainage. Dutch family-run company Smiemans Projecten was responsible for the design of the prefabricated glasshouse, in conjunction with architect Peter van der Toorn Vrijthoff.

Colvin and Moggridge provided the glasshouse setting and interior landscaping. Neal Potter designed the root zone and Tom Stuart Smith and Cleve West were responsible for the outside and teaching gardens. Altogether, a total of around 40 contractors were involved in the project.