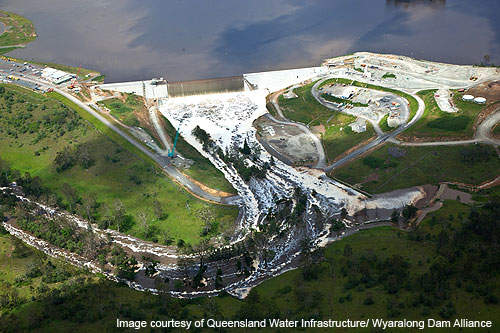 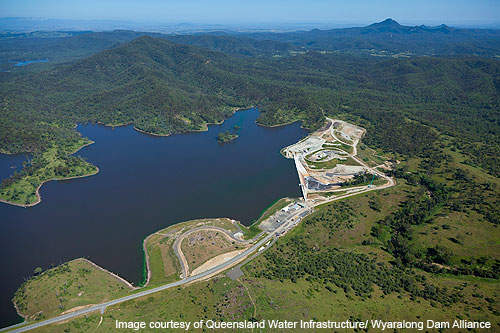 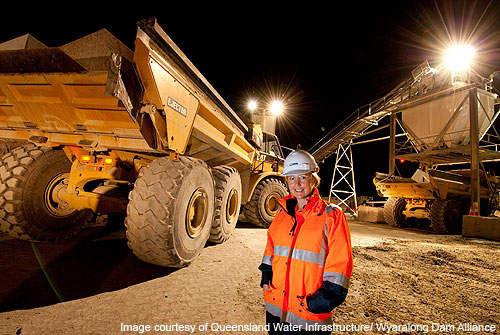 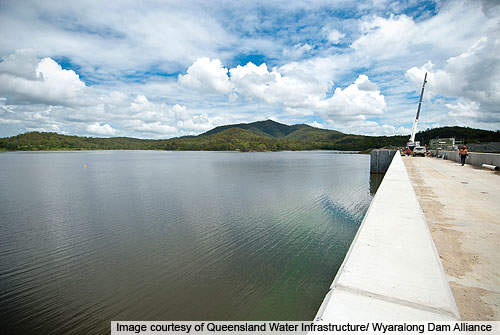 The dam is built across the Logan River channel.

The Wyaralong dam is constructed at the Logan River Catchment, Queensland, Australia. It is located on the Teviot Brook in eastern Beaudesert.

Detailed design and early site works started in May 2009. Construction of the dam began in October 2009 and was completed in December 2010. The mechanical, electrical and site rehabilitation works and recreational facilities were completed by May 2011.

The dam project on the Teviot Brook also involved construction of the Bromelton Offstream Storage facility and Cedar Grove weir. The A$348m project was built by Queensland Water Infrastructure (QWI).

The entire project was completed six months prior to the schedule and was handed over to the client in July 2011.

Capacity of the Cedar Grove weir and Wyaralong dam combined

"It will supply 21,000 million litres of additional water to South East Queensland every year."

When operated in conjunction with the Cedar Grove weir, the Wyaralong dam can hold up to 103,000 million litres at full capacity. It will supply 26,000 million litres of additional water to South East Queensland (SEQ) every year.

The water is sufficient to meet the requirements of about 150,000 people. The dam reached its highest storage capacity in January 2011 and water flew over the spillway.

By 2015, the dam project is expected to contribute around 8% of the total SEQ water supply.

The dam was built to ensure safe, sustainable and sufficient water supply for the growing population needs in SEQ.

The Australian Government has undertaken the A$6.9bn SEQ Water Grid project, an integrated treated water-supplying network, in response to droughts in Australia.

The Wyaralong dam, the Cedar Grove weir and the Bromelton Offstream Storage facilities are the main elements of the SEQ Water Grid. They increase the reliability of the Logan River Water Supply Scheme in drought conditions and control downstream floods.

The project will support the growing industrial and urban water requirements in the Beaudesert area and increase SEQ Water Grid capacity.

The Wyaralong dam is built with roller-compacted concrete (RCC) across the Logan River channel. It has an ungated central spillway and another spillway on the left abutment.

The project also includes a wet intake tower and two submerged and vertical discharge valves. Its design is based on Australian National Committee on Large Dams (ANCOLD) and Queensland Dam Safety Management guidelines.

The dam has an overall length of 500m and is built to a height of 48m. Located between Boonah and Beaudesert, it draws water from a 546km² catchment area. The dam covers 1,230ha. The water depth at the dam wall is 28m and the average depth in the river channel is 14m.

The dam is built with a hoist system and a fish hopper in both upstream and downstream. The water is released downstream and is diverted to treatment plants for regional distribution.

The use of insitu sandstone aggregate is the key feature of this project.

Construction of the Cedar Grove weir

The Cedar Grove weir was completed between May and December 2007 at a cost of A$18.5m. The weir construction involved 4,400m³ of concrete pour, 1,330t of sheet pile and 400t of reinforcement installation.

The Bromelton Offstream Storage facility was constructed adjacent to the Logan River to store 8,000 million litres of water.

Construction of the facility, pumping station and pipeline were completed in mid-2008. It was built at a cost of A$39.7m and has been operational since July 2008.

An existing 11.9km road section to the Wyaralong dam project was also replaced by a new 10.6km road. Opened in June 2010, the Beaudesert-Boonah road connector provides a short and safe roadway for about 1,600 commuters each day.

The road construction involved the moving of 846,000m³ of earth and building 68 culverts, plus 57 pre-cast beams, two truck pull-off bays and 20 fauna underpasses.

Key players with a role in the project

The alliance was responsible for the construction of Bromelton Offstream Storage, Cedar Grove weir and a 5km access road to the dam site.

QWI has developed a comprehensive Recreation Master Plan around the Wyaralong dam project.

"The Wyaralong dam is constructed at the Logan River Catchment, Queensland, Australia."

Several recreation, camping and picnic facilities have been developed to promote tourism. The A$4m recreational projects have been created to benefit the Boonah and Beaudesert regions.

About 40km of multi-trails have been created for cycling, horse riding, canoeing, walking and mountain-bike riding. About 400 nesting boxes have been installed for local wildlife in June 2011. Around 300ha of land will be rehabilitated and revegetated by March 2012.