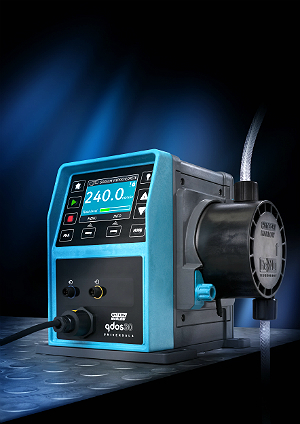 The revolutionary new Qdos 30 metering pump from Watson-Marlow Pumps Group is proving a resounding success in Barrie, Canada. Located in southern Ontario on the western shore of Lake Simcoe, Barrie is a modestly sized city (135,000 residents) but one with a track record for quality when it comes to its potable water supply.

Here, the Water Operations Branch of the Corporation of the City of Barrie is committed to ensuring that the supply of safe drinking water protects both public health and the environment through the development, implementation and maintenance of a tried and tested quality management system.

Continuous improvement is high on the agenda here, and yet the solution to one particular long-standing issue remained ‘unchecked’ on the list of challenges faced by Ron Baumgart, lead hand for ground water supply within the Water Operations Branch.

"Because we have a high concentration of iron and manganese in the Barrie region we use sodium silicate (Na2SiO3) as a sequestering agent in the potable water we supply to customers," he explains.

"Sequestering does not remove Fe/Mn from the water, but instead binds it in soluble form to prevent the compound from oxidising on contact with air or chlorine. In effect it’s provided for aesthetic purposes, to prevent the Fe/Mn from staining ceramic items such as sinks and lavatories."

At four-six parts sodium silicate typical dosage, diaphragm pumps were the units of choice until recently. However, maintenance costs meant a suitable alternative has long been on the wish list.

"Sodium silicate tends to give a hard coating to the ball valves found within diaphragm pumps," says Mr Baumgart. "This leads to clogging, meaning the pumps require disassembly and repair. Sometimes we can spend in the region of $300-500 on spare parts alone annually, without considering labour and travelling time – we have facilities all across the city."

Another problem is that the silicate will dry up when the diaphragm pumps stop, an effect that damages the actual diaphragm when pumping operations recommence. Again, these parts are expensive and can require replacement three times a year in some instances.

Pumped up for improvement

The local Watson-Marlow distributor, Metcon, approached the Water Operations Branch regarding the new Qdos metering pump, asking if the organisation would be willing to embark on a trial.

"Continuous improvement is one of our core values, so if something comes along that’s better than we have currently, then I am always willing to give it a try," says Mr Baumgart. "Investing in new technology is easy to justify if it can improve water service and delivery."

A pre-production Qdos metering pump was installed at one of Barrie’s potable water stations in June 2011, running without incident or maintenance until April 2012.

"We got the dosage set up and didn’t touch it – it just ran," says Mr Baumgart. "In April we got a production version Qdos 30 with the patented ReNu pumphead technology and it’s still in place to this day. Again, we haven’t needed to impart any maintenance whatsoever."

With no seals or valves in the flow path to clog, leak or corrode, Qdos 30 pumps boost process efficiency by providing accurate, linear and repeatable flow performance from 0.1 to 500 ml/min at seven bar, even when metering difficult fluids that are caustic, abrasive, viscous, shear-sensitive or gaseous.

We are looking to replace diaphragm pumps when they reach end-of-life or as we upgrade our SCADA control systems; and these pumps are now added to our preferred suppliers list," concludes Mr Baumgart.

"Thanks to the elimination of costs for spare parts and labour, the payback period is fairly short – even more so when considering that the price for Qdos is pretty competitive compared to that of diaphragm pumps anyhow."