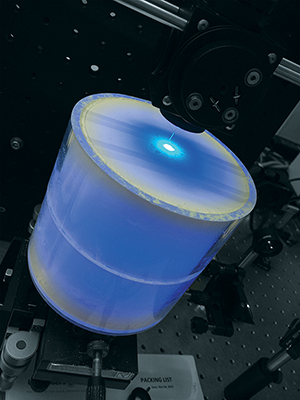 A team of researchers at Texas A&M University has developed a system that is capable of sampling water systems to find indicators of previously undetectable faecal matter.

The ultrasensitive method can detect urobilin in water systems, a byproduct excreted in the urine and faeces of many mammals, including humans and livestock such as cows, horses and pigs. The small urobilin molecules diffuse quickly and occupy the large volumes of lakes and reservoirs.

The technology allows the team to excite extremely small amounts of urobilin in large samples of water, and later on collect the resulting phosphorescent emission using a hollow, cylindrical container called an integrated cavity device. The device has narrowed the detection of the presence of urobilin down to a nanomole per litre.

Finding trace amounts of contaminants such as faecal matter in water systems can help sound the alarm for a serious contamination event, as the contaminants would be expected to originate from a larger source in the water system.

Texas A&M biomedical engineering department professor Vladislav Yakovlev said: "This is a huge improvement in terms of sensitivity, and our technique has tremendous potential for analysis of global drinking water supplies, particularly in developing nations and following natural disasters, where sophisticated laboratory equipment may not be available."

Funded by the National Science Foundation, the research has developed a technology that Yakovlev characterises as affordable, highly sensitive, easy to implement and capable of delivering analysis of water samples in real time. The technology is said to be suitable for use in the US as well as in developing countries which often face water quality issues.