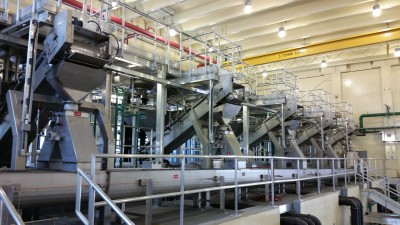 Bonnybrook Wastewater Treatment Plant, which is located in the Canadian city of Calgary, has been installed with Hydro International’s Advanced Grit Management system that eliminates large amounts of grit to drive efficiency in operations.

As a full new headworks facility was required to treat incoming wastewater and protect downstream processes from grit abrasion and deposition, Hydro International supplied a grit removal solution that could be built in the limited space and cope with the unique features of the influent at Bonnybrook, including wide variations in flow caused by dry summers and peak winter thaw.

Due to the city’s climate and topography with a high portion of grit arriving in the raw sewage during spring/early summer storm events, grit removal is important to Calgary’s wastewater treatment.

Consultant engineering firm Stantec was appointerd to design the new headworks and pre-qualify the suppliers.

A grit characterisation study was done to determine plant influent grit gradation and settling velocity as well as a performance evaluation of the current aerated grit chamber system.

Hydro International was pre-selected due to its ability to remove grit particles as fine as 75 micron, along with other performance and operational features, along with a track record at other regional installations with similar performance requirements.

As part of the four-month commissioning process, performance testing was done of the Hydro grit removal system by an independent third party.