Officials holding a replica of the Yanbu-Phase 2 Expansion MED Seawater Desalination Plant at the project's dedication, held in December 2012.

Executives in front of the MED evaporator right after the completion ceremony of the Yanbu Phase 2 Expansion MED Seawater Desalination Plant.

The plant is located at Yanbu Industrial City, 300km north of Jeddah, near the Red Sea. Image courtesy of NormanEinstein. 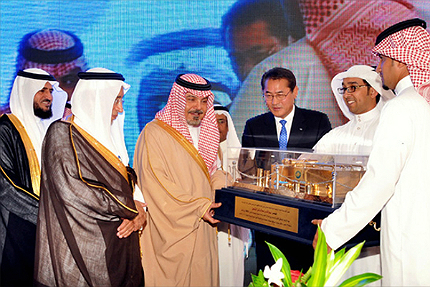 The project was carried out in conjunction with an associated power project, which involved installation of three power generation units with a combined output of 690MW at the Yanbu Power and Desalination Plant.

The construction works of the MED desalination plant’s expansion commenced in June 2011 and were concluded in December 2012.

The new plant will meet the water supply requirements of more than 200,000 people in the Medina region. The project created about 500 construction jobs for the local Saudis.

The EPC contract for the project was awarded to Hanwha Engineering & Construction, and desalination facilities were supplied by Doosan Heavy Industries & Construction. The facility is owned by Power and Water Utility Company for Jubail and Yanbu (Marafiq).

"The new plant will meet the water supply requirements of more than 200,000 people in the Medina region."

Yanbu desalination plant, prior to the latest expansion project, had a production capacity of 146,160m³ per day.

Ancillary equipment for the plant includes three potable water storage tanks and three process water tanks, each with a capacity of 40,000m³.

The feed water for the desalination plant is sourced from the Red Sea. The water is conveyed for distribution via 510km of underground piping passing through several pumping stations.

The expansion project also included construction and improvements to the marine, sea water network and fuel facilities, along with the installation of the MED facility.

The technology makes use of several stages (effects) where feed water is heated by steam in tubes during each stage. Some of the water evaporates and flows into the tubes of the next stage, heating and evaporating more water.

"Yanbu desalination plant, prior to the latest expansion project, had a production capacity of 146,160m³ per day."

Seawater is consecutively introduced into each stage of decreasing pressure, which serves to consecutively lower the temperature required to bring the water to boil. Boiling is mostly achieved on heat transfer surfaces (tube bundles) rather than by flash evaporation used in the MSF process.

A separate condenser is used for condensing the distillate vapour generated in the last stage, which also enables the feed seawater to be slightly pre-heated, decreasing the required heat input. Condensed distillate from each stage is collected in a header tank and transported for post-treatment.

The complete civil and building works for the project were carried out by Assad Said, while the design of the civil and structural works was provided by Hiteco Engineering.

Saudi Archiredon was also involved in carrying out the civil, mechanical and electrical works for the major facilities associated with the plant, under a contract worth $210.6m.