Sidem, a subsidiary of Veolia 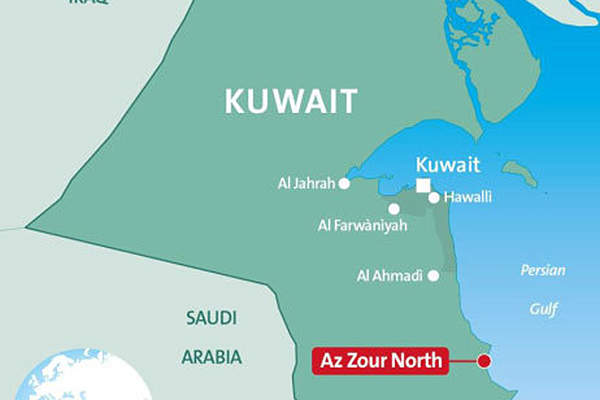 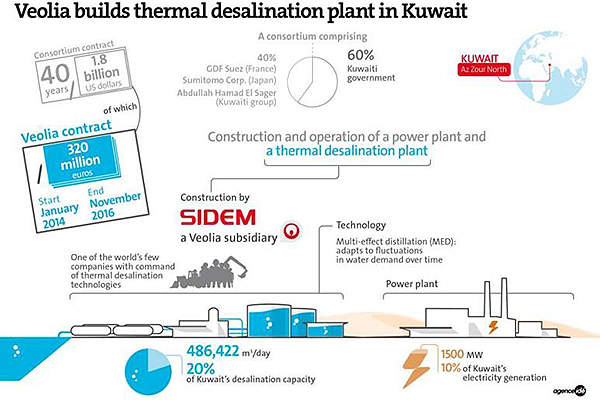 The desalination plant was built by Sidem, a subsidiary of Veolia. Image courtesy of Sidem. 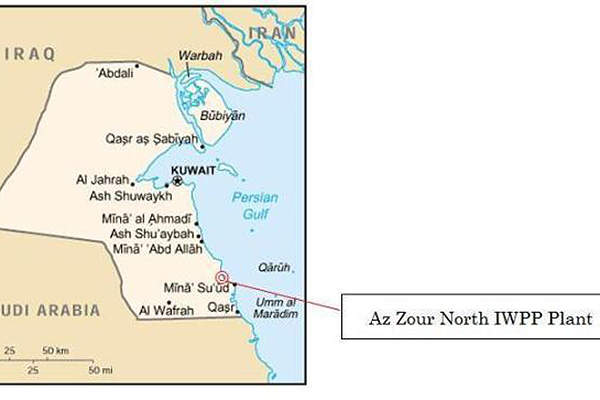 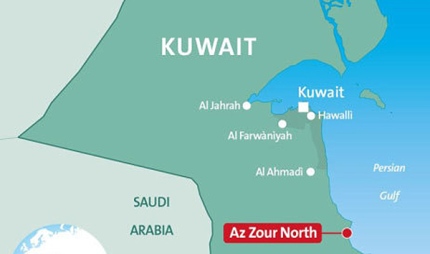 Phase I of the Az-Zour North Independent Water and Power Project (IWPP) is located at Az-Zour, approximately 100km south of Kuwait City.

Construction of a desalination plant and a gas-fired, 1,500MW combined-cycle power plant was completed in November 2016.

The treated water and the power produced from the complex are supplied to the country’s national power and water grid operator Kuwait Ministry of Electricity and Water (MEW) under a 40-year long-term Energy Conversion and Water Purchase Agreement (ECWPA).

The desalination and power project forms part of the overall IWPP being developed by ENGIE (previously known as GDF Suez) (17.5%), Sumitomo (17.5%), Abdullah Hamad Al-Sager and Brothers (5%), and Kuwaiti Government entities (60%). The overall project aims to generate 4,800MW of electricity and approximately 280MIGD of desalinated water. It is being carried out in five phases.

ENGIE and Sumitomo undertake operations and maintenance works at the plant on a 50:50 basis.

The MED process implemented for the treatment of seawater at Az-Zour North is popular for its ability to adapt to fluctuations in water demand.

The feed water for the desalination plant is sourced from the Persian Gulf and is conveyed for distribution via a new intake system constructed for desalination and cooling purposes. A connecting structure to the existing discharge system will be built simultaneously.

The distillate water is re-carbonated before it is delivered to a water distribution complex (WDC) reservoir through four new pipelines, to be constructed by MEW. A new 400kV substation was constructed by the developer to discharge the generated power.

The MED technology involves multiple stages where feed water is heated by steam in tubes. Each subsequent stage is maintained at a lower temperature. The steam condenses into distillate (fresh water) inside the tubes and flows into the tubes of the next stage, heating and evaporating more water.

"The power required for running the facility is supplied from the Az-Zour North power plant."

Seawater is continuously fed on the top of horizontal tubes, in each stage decreasing the pressure to consecutively lower the temperature required to bring the water to boil. The water drips from tube to tube until it is collected in the final stage.

The MED process operates at a low temperature (between 60°C and 70°C) using the thermal output of the power plant to heat and evaporate the seawater to avoid corrosion.

In the last stage, the produced steam condenses on a distillate condenser, which is cooled by seawater. A portion of the seawater from the outlet of this condenser is further used to repeat the process, while the remaining water is discharged into the sea.

Brine and distillate are collected in individual stages, until the last stage where they are separated by centrifugal pumps.

Nippon Steel & Sumikin Stainless was awarded a contract from MEW to supply 4,300t of ASTM S32304 and S31803 grade duplex stainless-steel plates for the integrated power and desalination plant. Technical advisory services for the project were provided by Lahmeyer International.

The total cost of the IWPP, including the cost of construction, is estimated to be approximately $1.8bn. Japan Bank for International Cooperation (JBIC) co-financed $1.43bn of the project cost along with other international commercial banks. Other lenders include National Bank of Kuwait (NBK), Nippon Export and Investment Insurance, Bank of Tokyo-Mitsubishi, Sumitomo Mitsui Banking Corporation and Standard Chartered Bank.