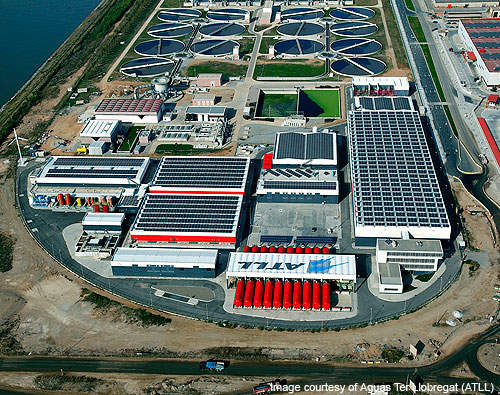 An aerial photograph of the Barcelona Desalination Plant. 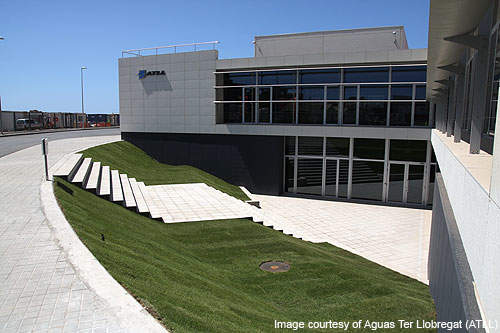 Control building of the plant. 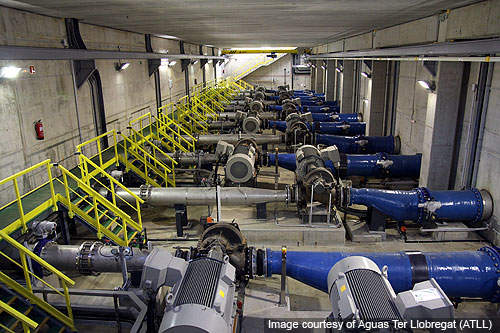 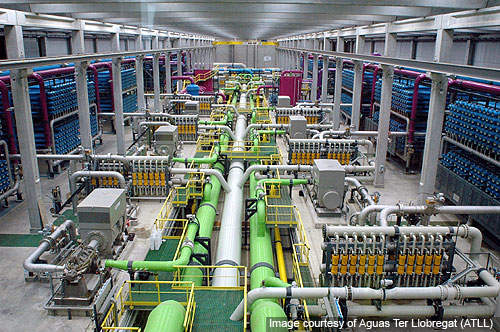 One of the osmosis buildings. 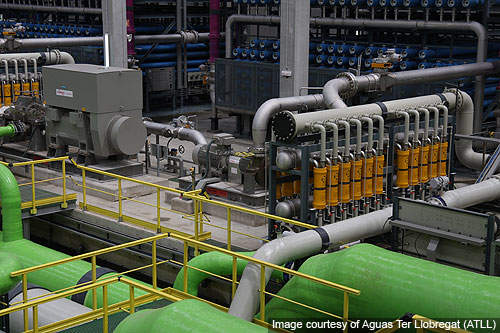 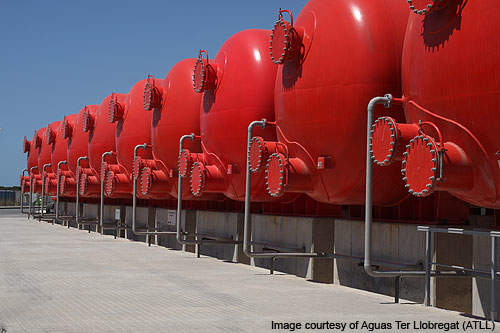 The Barcelona Sea Water Desalination Plant is located next to the mouth of river Llobregat in the municipality of El Prat del Llobregat, Barcelona.

With a drinking water output of 200,000m³/day, it is the largest reverse osmosis (RO) based desalination plant in Europe. It was awarded the ‘Desalination Plant of the Year’ award by the Global Water Awards 2010.

The plant was built by Aguas Ter Llobregat (ATLL), the public utility responsible for the supply of water to the city of Barcelona and the surrounding eight districts. It was intended to increase water security and availability in the Barcelona metropolitan region.

The plant was officially inaugurated in July 2009. It is currently supplying drinking water to around 1.3m inhabitants in the region, catering to 20% of the population.

The project was originally conceived in the Spanish National Hydrological Plan and a strategic plan of Catalonia.

In 2005 the Catalan Government assigned the project to ATLL. In response to the assignment, ATLL awarded a €159m contract to Degramont and Aguas de Barcelona (Agbar) in 2007 to design, construct, and operate the plant for two years.

The sea water intake system comprises an open connection involving two intake towers spaced at 30m. The base of the tower is located 2,200m from the shoreline and 31m below sea level.

"In 2005 the Catalan Government assigned the project to ATLL."

Raw water for the pumping station is supplied through two 1,800mm diameter polyethylene pipes. A fibre-glass-reinforced polyester pipeline of 2,000mm diameter carries it to the desalination plant.

More than 5,200 photovoltaic (PV) modules are installed on the roofs of eight buildings of the plant. They generate approximately 1MW of electricity annually, which can reduce 660t of carbon dioxide emissions.

A wind turbinel is also installed to provide electricity, with a tower height of 20m and 16m diameter blades.

Captured sea water is screened through four automatic 3mm sieves and disinfected using chlorine dioxide, hypochlorite or potassium permanganate depending on its characteristics.

Coagulation of the disinfected water is conducted in two 250m³ chambers, while sludge is collected at the surface of the float by overflow. The flotation building contains ten floaters that are 78m² in size. Coagulant and coadyuvant are added to the water in post-coagulation chambers.

Finally, a second stage of disinfection is carried out and a dispersant is added to avoid formation of salt crusts during the treatment.

Pre-treated water is fed to the RO membranes and processed using a partial dual pass method.

In the first pass, pre-treated water is pressurised at around 60bar and fed into 16,800 membranes fitted in ten RO racks in a single row. To optimise energy consumption and maximise water production concurrently, the membranes are set up in a hybrid system, where two membranes are arranged in a serial order.

The second pass helps keep the boron content below the 1mg/l limit required by European regulations. It employs two twin-stage RO racks constituted of 1,092 brackish water membranes and has a conversion rate of 85%.

"The plant was built by Aguas Ter Llobregat."

The treated water has a low pH value and reduced salt concentration. To recover the balance of these results and make the water drinkable, it is re-mineralised by lime filters and disinfected by adding chlorine dioxide.

The project was co-financed by the EU, which contributed €150m. The Spanish Ministry of Environment provided €52m, while €28m was financed by ATLL.

The pipes and fittings were manufactured, supplied and erected by Protecciones Plásticas (Protesa).

Grupo ACS was appointed as the civil engineer. Procontrol rendered the control engineering. It was also responsible for programming of functions, screens and the flotation side of the control system.