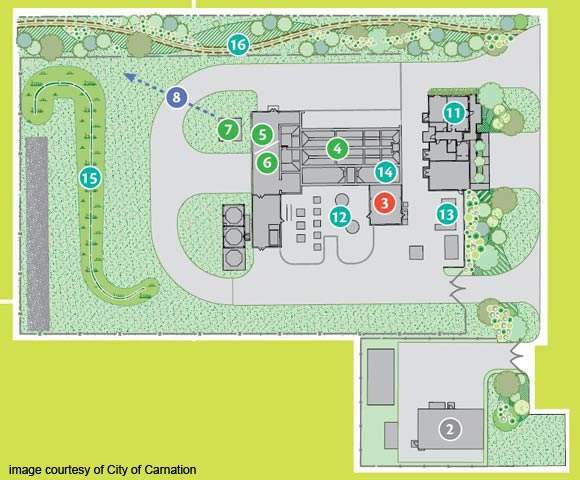 Plan of the new facility. 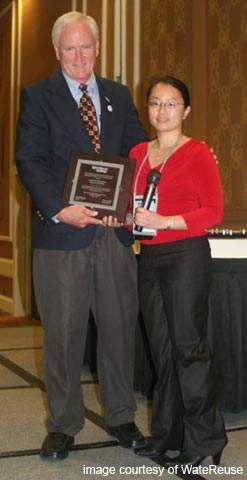 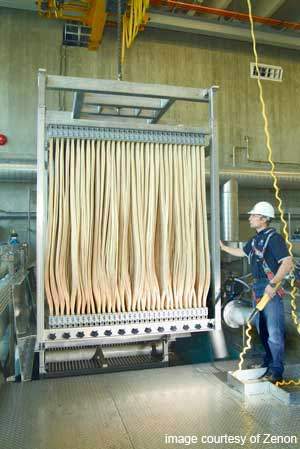 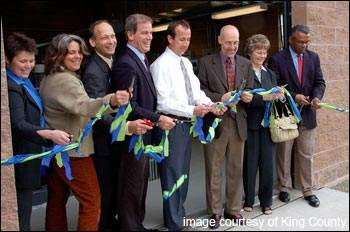 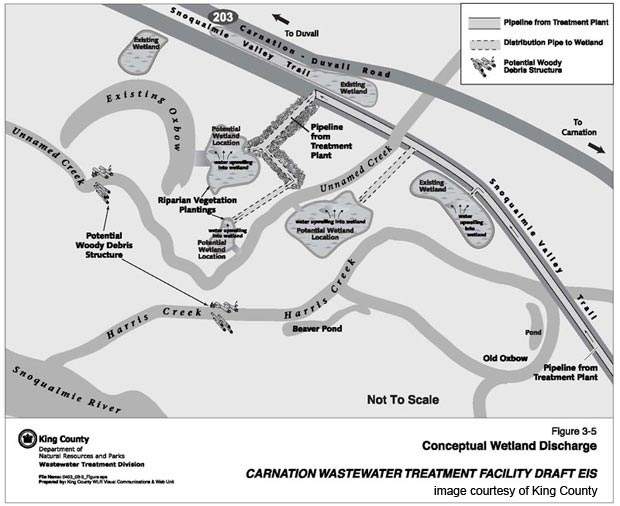 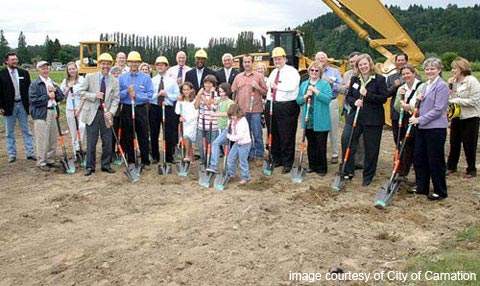 Susanna M Leung of Carollo Engineers accepts the WateReuse Small Project of the Year Award on behalf of the Carnation Wastewater Treatment Facility.

On 8 September 2008, at the 23rd-annual WateReuse Symposium in Dallas, the newly completed Carnation Wastewater treatment plant won the “Small Project of the Year Award”.

The city’s new membrane bioreactor (MBR) plant – officially dedicated at the beginning of June 2008 – provides tertiary level treatment and sidesteps the earlier reliance of both residents and local businesses on ageing septic tanks, which had long been seen as an obstacle to further development.

The full scheme includes the treatment plant itself, a new conveyance pipeline and discharge, together with the installation of the city’s first centralised sewer system. The plant has an initial treatment capacity of up to 1,500m³ of wastewater per day, which could be expanded to treat around 1,800m³/d to meet projected growth.

The project cost was $23m, with the membrane system costing around $900,000: $1.3m of the budget was met through federal funding. The plant serves almost 2,000 people in urban areas of Carnation and will have the capacity to serve around 4,000 by 2030.

Historically, Carnation had relied on individual septic tanks and drain fields in the absence of a central sewerage system. In 1987, however, the number of these found to be inadequate coupled with soil surveys and the likelihood of the unprotected aquifer becoming contaminated led to major public health concerns.

“The full scheme includes the installation of the city’s first centralised sewer system.”

The city council recognised that no attempt to bring about sustainable, long-term economic revitalisation would be possible without first addressing the lack of a centralised wastewater collection and treatment system.

Consequently, in July 2002, after a series of engineering studies and considerable discussion, an agreement was reached between the city and King County.

Under the terms of this, the county built the new wastewater treatment facility, while the city designed and built a local sewer system.

The new WWTP will protect the nearby Tolt and Snoqualmie Rivers and, as Carnation lies in an urban growth area defined by the state Growth Management Act, will play an important role in helping the city manage the increased demands made by the expected expansion. It has been predicted that the population will double within five years of the plant start-up.

The finished facility occupies about two acres of the ten-acre city-owned site, which also accommodates the new wastewater pump station alongside the treatment plant itself.

Although the new facility is relatively small – being only designed to serve the city of Carnation and its designated urban growth area – the water quality standards remain stringent. As a result the plant provides tertiary treatment in order to guarantee the high removal-levels demanded for suspended solids, nitrogen and phosphorous.

King County conducted trials on a number of potentially suitable systems for both this application and the larger Brightwater project, including reverse osmosis and fuzzy upflow filtration, before finally selecting MBR technology.

Wastewater is conveyed to the Head Works via an airvac pumping station, the influent undergoing a conventional treatment regime on first arrival at the plant, comprising screens, clarifiers and grit removal. The final stage process, which employs the MBR ultra-filtration technology, contains five membrane cassettes, to provide the plant’s 1,800m³/d design capacity.

Systems from a number of providers were considered, with GE’s ZeeWeed MBR eventually being chosen for both this and the larger Brightwater project. The membranes lie immersed in the mixed liquor within an aeration vessel. Membranes in the MBR system suck wastewater through hollow fibres with microscopic pores. They can filter particulate matter, including individual bacteria. A pump draws water through them, while intermittent airflow entering from the bottom of the module ensures that the surface of the fibres remains clean.

“Enhancements at the wetland include new water control structures.”

Highly effective removal of both soluble and particulate biodegradable material is achieved within the system as a result of the elevated biomass concentrations supported.

The combination of the high quality effluent produced, together with proven operational reliability, were major factors in the adoption of this technology.

The reclaimed water undergoes final UV disinfection prior to discharge, the settled solids being trucked off-site weekly for disposal.

Initially the treated water was transported along a 12in pipe to be discharged via a river outfall at Carnation Farm Road Bridge, some one-and-a-half miles from the plant. In May 2009, the reclaimed water was discharged to the 59-acre Chinook Bend wetlands along the Snoqualmie River to enhance the local hydrology and water quality. This wetland is the primary discharge point of the plant. However, the river outfall will remain operational, to serve as a backup to be used in exceptional circumstances.

The plant produces Class A reclaimed water, the highest quality of the four classes identified by Washington State and suitable for irrigation or non-potable industrial processes. The treated water is made available for irrigation, particularly in the summer and its potential use on park or agricultural land is under evaluation.

Enhancements at the wetland include new water control structures, additional four acres of habitat and plantation of about 15,000 trees and native shrubs. The plant also helps to preserve wildlife habitat and fish at the Chinook Bend Natural Area.

King County was responsible for the design, construction and operation of the new treatment plant; the city of Carnation designed and built the allied local wastewater collection system. The plant design team comprised Carollo Engineers and Michael Willis Architects. The 2004/2005 water conservation and demand analysis was done by Aquacraft, the Pacific Institute and Carollo. GE Water & Process Technologies supplied the membrane systems.