The reservoir renovation project began in February 2013 and was concluded in November. Image courtesy of Tampa Bay Water.

The reservoir has the capacity to store 15.5 billion gallons of water. Image courtesy of Tampa Bay Water. 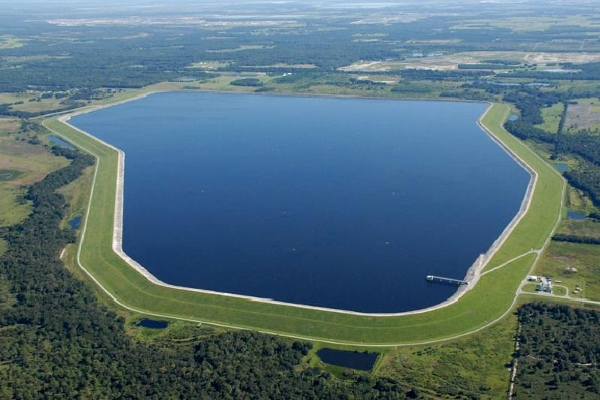 The newly renovated C.W. Bill Young Regional Reservoir, located in Hillsborough County, Florida, US, became fully operational in November, solving the issue of abnormal cracking in the soil-cement erosion-control layer of the reservoir.

The reservoir, owned and maintained by Tampa Bay Water, has a capacity to hold 15.5 billion gallons of water to be supplied to the Hillsborough, Pasco and Pinellas counties of Florida.

The reservoir renovation project started from the bottom up in February 2013 to allow for the refilling of the reservoir while construction around the top of the facility was being completed. Water started flowing into the reservoir from July, with construction works gradually coming to an end by early November.

"Abnormal cracks began to appear in more than about 40% of the reservoir’s interior lining in 2006."

The C.W. Bill Young Regional Reservoir was built at a cost of $121m and became operational in October 2005. It is spread across 1,100 acres of land and covered by 5,200 acres of earthen embankment in Hillsborough county, which is designated as a wildlife reserve.

Abnormal cracks began to appear in more than about 40% of the reservoir’s interior lining in 2006. Further investigations by Tampa Bay Water’s consulting engineers determined that the high pressure from water trapped in the soil wedge, below the soil cement, resulted in the cracking.

In April 2012, a federal jury announced the verdict in favour of HDR Engineering as the jury found no breach of contract by HDR.

The C.W. Bill Young Regional Reservoir is an earthen embankment impoundment with a soil-cement layer, a stair-step interior liner and an exterior grassed terrace slope.

Surface water from the Tampa Bypass Canal, Alafia River and Hillsborough River is supplied to the Tampa Bay Regional Surface Water Treatment Plant for treatment and distribution, while surplus water is pumped to the reservoir through an 84in pipe for storage and use during draught situations.

The renovation project primarily involved replacement of the reservoir’s erosion control layer made up of soil-cement. The layer includes a soil wedge lying between the soil-cement layer and a deeper geomembrane protecting the rest of the embankment.

Kiewit Infrastructure was appointed primary contractor for the renovation project in June 2011. The cost of Kiewit’s proposal was $162.4m, of which $42m would be required to increase the facility’s storage capacity by three billion gallons. However, the proposal to increase the capacity was not feasible, hence investment on the project was reduced to about $129m.

Kiewit’s solution primarily comprised of adding drains to the soil wedge, removing the reservoir’s existing soil-cement, soil wedge and geomembrane layers, and restoring it with a new geomembrane and stair-step soil cement around the entire interior face of the reservoir.

Kiewit also met the necessary environment regulatory requirements to cause no adverse impact on the listed and protected wildlife reserve in the area. It also relocated the indigenous fish in the reservoir to nearby rivers and other water bodies before commencing renovation works.

Construction details of the reservoir renovation project in Florida

"The reservoir’s existing geomembrane was removed and replaced with a new geomembrane with geotextiles on both sides to prevent water from seeping into the emabankment."

The first stage of construction involved the removal of the existing erosion-control layer. Hydraulic hammers were positioned to break up the soil cement and scraper tractors and pans were used to excavate the soil wedge. The excavated soil cement and soil wedge was reworked and replaced as embankment fill, or used in the construction of haul roads. Stair-stepped soil-cement of roller compacted concrete (RCC) was used throughout the interior surface of the reservoir.

The reservoir’s existing geomembrane was removed and replaced with a new geomembrane with geotextiles on both sides to prevent water from seeping into the emabankment. A Spanish manufacturer was contracted to provide the high-performance polyvinyl chloride (PVC) liner.

Tampa Bay Water appointed CH2M HILL to provide professional engineering services for the renovation project. It will continue to provide its expertise for advisory engineering, technical, construction and administrative competence.