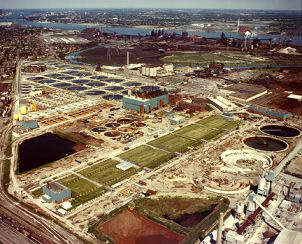 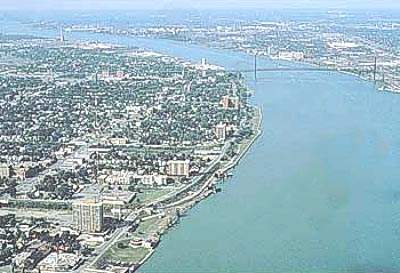 Aerial photograph showing Detroit and Detroit River. Many of the developments at the plant over the years have been designed to safeguard this waterway. 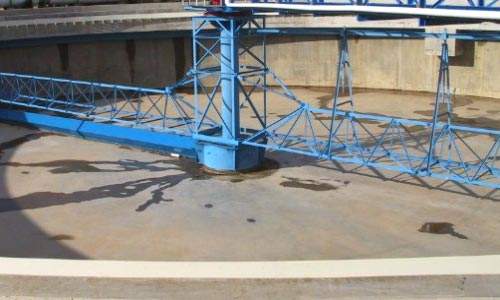 All of the 25 existing secondary clarifiers will be improved as part of the ongoing programme, principally by the replacement of a number of their key components and ancillary equipment. 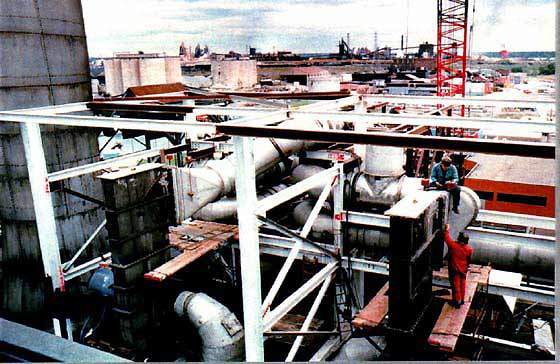 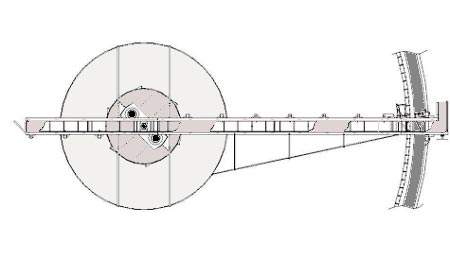 In addition to the major infrastructure elements of the project, a scheme is underway to compile and update the plant's "as-built" drawings and to create them where none currently exist. A network database is also being developed to store them. 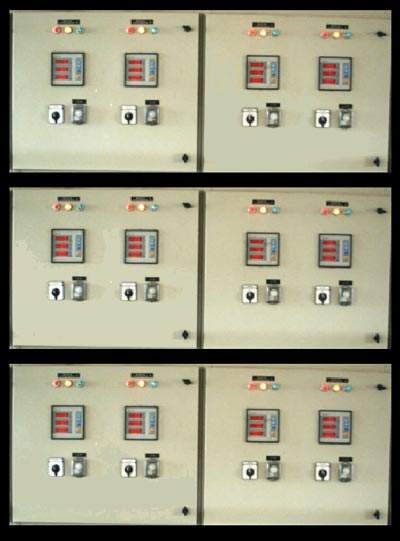 The second phase of the plant's extensive instrumentation and computer upgrade is underway, covering equipment used for data acquisition and control of the DWSD systems. In addition, new control rooms are being built for the oxygen plants and sludge dewatering complex. 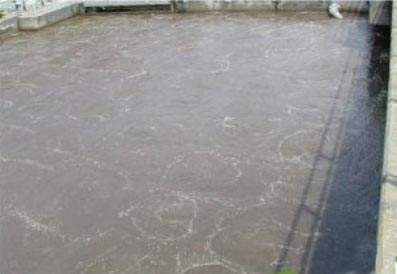 The current phase of the project includes a major programme of works on the primary treatment facilities including replacing the troughs and weirs at the rectangular clarifiers.

Detroit’s wastewater treatment plant – the largest single-site WWTP in the United States – is undergoing an ongoing improvement programme designed to ensure long-term compliance with increasingly stringent regulatory standards. The extensive scheme of work currently being implemented by Detroit Water and Sewerage Department (DWSD) is the latest in a long history of upgrades to keep up with changing times and growing demands since the plant first entered service in February 1940.

The programme is intended to safeguard water quality, replace ageing infrastructure and increase efficiency by making use of recent advances in technology, as well as providing increased environmental protection and employee safety.

The scheme of work underway is comprehensive and addresses elements of both primary and secondary treatment, solids handling and general plant operation. It includes the construction of new primary clarifiers, the provision of associated scum buildings and an additional pumping station, improvements to all of the existing final clarifiers, renovation of the oxygen plants and modification of the aeration deck. 16 belt filter presses are also to be replaced, improvements made to both the incinerator burner train and sludge thickening complex and the storage tanks rehabilitated.

In addition to the work at the WWTP, other major elements of the improvement programme include the replacement of water mains, a comprehensive series of instrumentation system upgrades and the construction of additional combined sewer storm-water overflow facilities.

A total of $2.6 billion has been earmarked for the capital improvement programme over five years, with a budget of $434 million allocated to cover water and sewer projects for 2005-06.

Detroit’s sewer system began in 1836 with the “The Grand Sewer” – a stone and brick construction which enclosed Savoyard Creek – a portion of which remains in service to this day. Over the next hundred years, the burgeoning population and, in particular, the rapid development of Detroit’s east side resulting from the enormous growth of motor car manufacturing placed ever increasing demands on the existing infrastructure. To relieve the situation, a series of new sewers were constructed, along with Detroit’s WWTP, which was completed in 1939 at a cost of $10 million.

The plant was originally designed to provide primary treatment, which then comprised the removal and incineration of settled solids and the chlorination of the effluent, which was discharged into the Detroit River. Though the primary treatment capabilities were enhanced in 1954 by the addition of two further sedimentation tanks, it was becoming clear that additional measures were necessary to safeguard river quality. In 1957, a $33 million project was begun to provide improved treatment and increase the plant’s service area.

Polymer and pickle liquor feeding facilities were added to the plant in 1970 and the chlorination system was subsequently improved. In 1972 the new Federal Water Pollution Control Act required all municipal wastewater to undergo full secondary treatment, which led to the construction of aeration tanks, final clarifiers, cryogenic oxygen plants and additional sludge handling facilities at the plant.

The plant has continued to benefit from an ongoing programme of improvement, including the augmentation of its ability to receive peak wet weather in 1994 and, between 2000-04, the first phase of a department-wide instrumentation, control and computer systems upgrade.

A new electrical feed is to be installed at the primary tanks, which will include controls, distribution, transformers and switch gear, as well as increasing power to the scum house to serve stand-alone boilers.

Further work addresses aspects of the secondary treatment facilities. A series of improvements are planned for all of the 25 existing final clarifiers, including the replacement of influent and effluent meters, valves, the troughs and weirs and RAS pumps. In addition, the scum collection system will be modified and new centre drives fitted along with associated electrical, mechanical and maintenance work.

Equipment at the plant’s two oxygen cryogenic plants will undergo rehabilitation and renovation and a new centralized control room will be provided. Conversions and improvements to the aeration deck will also be undertaken to improve the safety and operational reliability of the aeration system.

16 of the sludge dewatering belt presses will be replaced, along with the existing belt conveyor, a new pre-fabricated blower building will be constructed, two sludge feed pumps installed and a new control room built.

The burner trains and main stack bypass at the plant’s incinerator facilities are to be completely rehabilitated and various other improvements made to the buildings, while the sludge thickening complexes and storage tanks will also be renovated.

Other projects to be undertaken include the second phase of the instrumentation and computer upgrade – covering equipment used for data acquisition and control of the DWSD systems – and renovating the Old Administration and Ragland Buildings to prolong their useful life. The ageing operations laboratory will also be replaced with a new state-of-the-art facility and a series of essential mechanical, electrical and civil works carried out across the plant to rehabilitate or replace obsolete or outdated equipment as necessary.

The City of Detroit Water and Sewerage Department – the third largest water and sewer utility in the United States – is the programme sponsor. Many contractors have been involved in the various aspects of the work, including Walbridge Aldinger, Jenkins Construction, Montgomery Watson, Tucker Young Jackson Tull, Westin Engineering, Emerson Process Management, Datanet and Tibco.