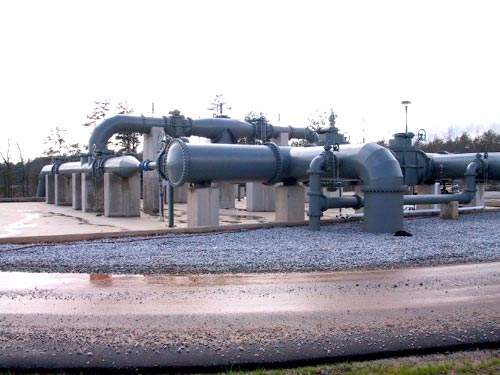 Magnetic flow meters monitor the influent, which arrives at the site's three large force-mains from a number of locations across the county. 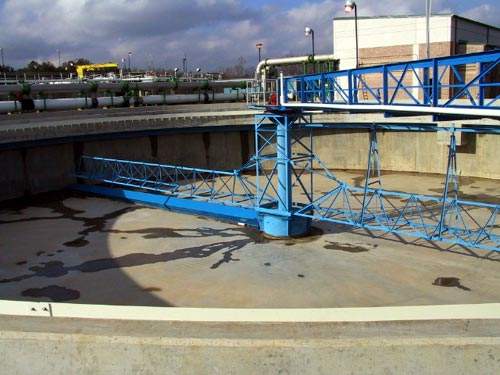 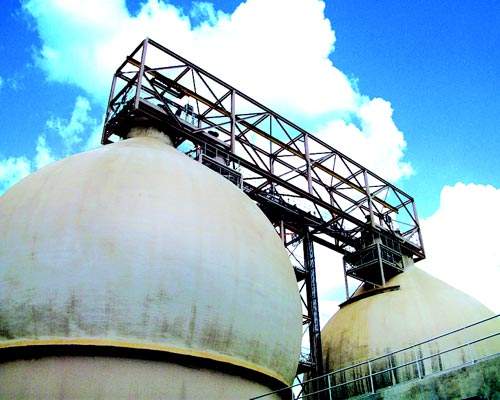 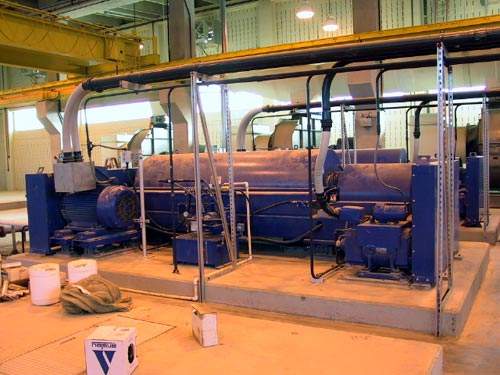 Surplus sludge is thickened by centrifuge before being digested; final disposal is to landfill. 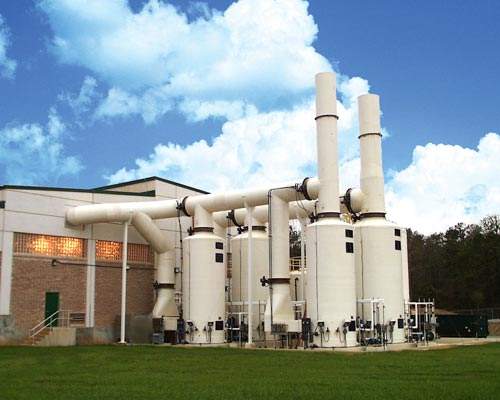 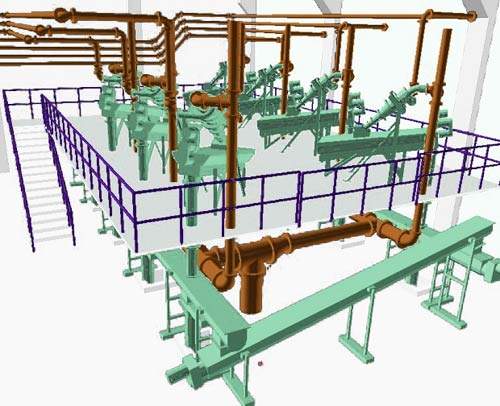 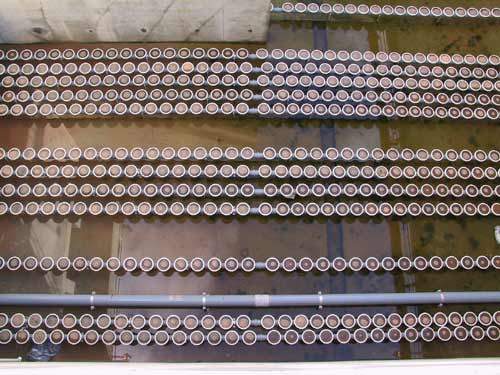 Fine bubble diffusers in one of the plant's four activated sludge bioreactors. Adjusting the relative aeration within the vessel aids denitrification and optimises process control. 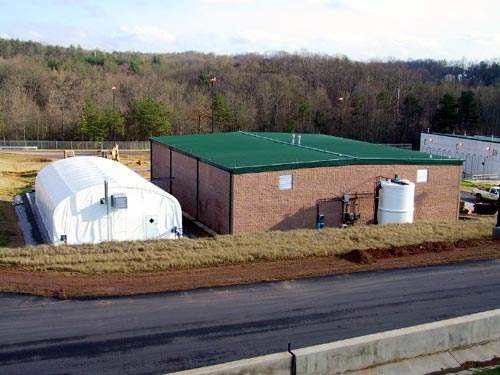 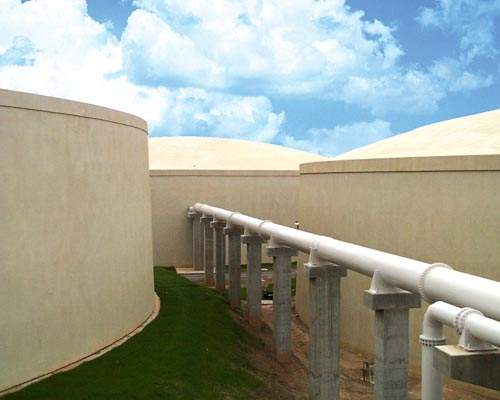 On-site tanks. All plant structures have been deliberately planned to minimize their visibility from both local homes and highways; the facility itself is located in the middle of a wooded, 700-acre site.

The expansion of Gwinnett County’s flagship wastewater treatment plant has seen the facility both win a prestigious design award and be subject to a four-and-a-half year legal dispute over discharge arrangements, which reached as far as the Georgia Supreme Court. The F. Wayne Hill Water Resources Centre is located 56km north of downtown Atlanta and is designed to significantly meet the wastewater treatment and sanitary needs of Gwinnett County.

Gwinnett County is one of the fastest growing areas in the US. Although an extension to the plant was planned from the outset, the rapid population increase led to the start of the design stage before the original facility was completed. The County’s Board of Commissioners selected a design and construction management team of CH2M Hill, Jordan James & Goulding and Precision Planning to oversee the work and awarded the construction contract to Beers Construction, acquired by Skanska.

Raising the total capacity to 228,000m³/d (60 million gallons per day) – a three-fold increase – the phase II extension was operational in 2006, a year ahead of the schedule. The project cost was $350m, funded by a combination of bonds and revenue from water charges.

Phase I treats 76,000m³ of wastewater daily, the flow being 98% residential. Facing predictions of potential under-capacity by 2006, the design of phase II was instigated early, and to make best use of the time available, the team opted for 3D plant modelling to provide the 3,000 drawings required.

This represented a significant benefit, since only one plant model needed to be made, allowing drawings to be created directly, as required. Integrated into compatible architectural software, this enabled a master design to be produced containing all the detail of construction, services and equipment and allowed potential interferences to be spotted early in the project, making revisions quicker and easier. The same 3D models have also helped the building contractor to plan construction sequences, saving time and minimising disruption to the plant.

Effluent from the existing plant is partly used for landscape irrigation, with the remainder being discharged to the Chattahoochee River. It became clear from the results of predictive modelling by Georgia’s Environmental Protection Division (EPD) that this arrangement could not cope with the greater volumes of phase II.

“Gwinnett County’s wastewater treatment plant has won a prestigious design award and been subject to a legal dispute.”

To avoid adversely affecting the dissolved oxygen level at the Chattahoochee / Dog River confluence in Douglas County, it was decided that the additional flow would be discharged directly into Lake Lanier. This body is both a drinking water source and an important leisure amenity for the area. While the present Chattahoochee River outfall lies downstream of the lake, the proposed new discharge was planned to enter it in the vicinity of Gwinnett County’s newest drinking water intake.

This inevitably led to concerns regarding possible effects on water quality and a variety of potential impacts were addressed. Environmental modelling was again used to ensure that the permitted phosphorus level would be consistent with the lake’s eutrophication status.

The depth of the submerged outfall diffuser was determined in conjunction with the Division of Wildlife and the EPD to mitigate any possible detrimental change in water temperature and a requirement for temperature monitoring in the lake was also imposed. Georgia, being one of the few states to set specific water quality requirements for all of its lakes, imposed a set of limits that were more strict than for any other permitted discharge in the state.

However, a number of lakeside residents and environmentalists felt that the proposed discharge would pollute the lake and create algae blooms in the vicinity of its popular beaches and began litigation to try to impose more stringent permit conditions.

Their case was based on the concept of anti-degradation, a complex rule within the 1972 federal Clean Water Act, which was enacted to ensure that unpolluted rivers and lakes remain that way. According to the terms of Georgia’s anti-degradation rules, discharge permit holders must use treatment methods which are the “highest and best practicable under existing technology.”

Since it was not contested that the plant has the technological capability to remove higher levels of phosphorus and faecal coliforms than the initial permit demanded, the objectors felt that it should be required to do so. Their ensuing legal battle ultimately reached the state’s Supreme Court, where the ruling was in their favour and an earlier appeals decision was overturned.

“The wastewater treated at the F. Wayne water resource centre is discharged into the Chattahoochee River.”

However, discharges into Lake Lanier seemed inevitable in the light of consistently growing pressure on water resources. Under the metropolitan Atlanta water plan, they are set to increase to around 530,000m³/d by 2030 – roughly seven times the current level – which will allow an additional 250,000m³/d to be withdrawn to meet the rising potable need.

In early 2005, the EPD issued a second permit, stipulating a phosphorus limit of 0.1mg/l, shaving 0.03mg/l off the original. In late April, the two sides in the dispute met and a tentative compromise was reached, lowering this limit further to 0.08mg/l and altering the depth and location of the discharge point.

Currently, the wastewater treated at the F. Wayne water resource centre is discharged into the Chattahoochee River through a 20-mile pipeline from the plant. Additional reclaimed water is transported to Lake Lanier after the stringent treatment process at the plant through a 72in reuse pipeline where it is reused for the irrigation purpose.

Several approaches were adopted to ensure high reliability. The plant is designed around the multiple barrier system, using a variety of processes to remove the same pollutants, and has a high provision of backup / stand-by equipment, including a secondary power supply, to guarantee continuity of operation.

Phase II brought a number of technological upgrades to the existing facility, which require integration into the existing plant’s more conventional design. The plant is located on a 700-acre site and has facilities such as membrane technology for tertiary treatment, primary clarification, biological reactors, packed-tower wet scrubber systems for odour control and emergency storage facilities.

Influent, pumped from a number of locations in the county, arrives via three large force-mains equipped with magnetic flow meters. It flows through fine and brush screens before entering vortex grit removers and then primary clarification tanks.

RAS returns to the bioreactors from the four peripheral feed / peripheral take-off secondary clarifiers. Surplus sludge is thickened by centrifuge and then digested, along with material from primary settlement, in two 3,800m³ anaerobic digesters. After dewatering, the digested sludge is sent to landfill.

“Located on a 700-acre site, the plant has facilities such as membrane technology.”

Phase I wastewater treatment continues with high-pH lime clarification to remove pathogens and precipitate out any residual metals and phosphorus. Gravity chemical thickeners and dewatering centrifuges are subsequently used to remove unwanted chemical solids, including the remaining undissolved lime, which go to landfill.

Re-carbonation follows, the pH being neutralised by carbon dioxide. This takes place in two stages with an intervening clarification period.

The flow is then filtered through sand, treated with ozone – this being one of the few plants in southeast USA to use ozone disinfection – and passed through two separate beds of granular activated carbon. After a second ozone treatment, the effluent travels from the pumping station to the discharge point.

Phase II uses GE’s ZeeWeed membranes to meet permit discharge levels, making the finished plant one of the world’s largest to use this technology for tertiary treatment. In addition, the design also features inclined plate separators from Siemens Water Technologies, their first ever use at a major WWTP treating water for reuse.

Gwinnett County is the client and runs the plant through the Department of Public Utilities. Both phases of the development had CH2M Hill, Jordan James & Goulding and Precision Planning as the design and construction management team; Skanska was the construction contractor and provider of the storage facilities.