Schoharie Reservoir is one of the 19 reservoirs that supply water to New York City.

The dam has served New York for 85 years accounting for 16% of the city's water needs per year and serving a population of about nine million people.

The Schoharie Reservoir, which the Gilboa Dam impounds, has a watershed area of about 50,500ha. The reservoir has a holding capacity of 19.5bn gallons. 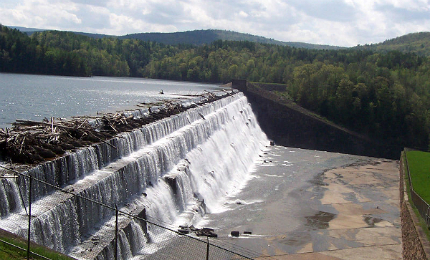 The New York City Department of Environmental Protection (NYCDEP), which owns the dam, has embarked upon a major reconstruction project worth $400m, which will be realised by 2022. The project, which commenced in 2006, is being implemented in five phases.

Phases one and two of the project were completed in December 2006 and June 2012 respectively. Phase three of the project, which involves the main component of the project, is currently underway, with its completion slated for 2019.

The project is being implemented to extend the service life of the dam and comply with New York State Department of Conservation dam safety guidelines. It is being carried out to control possible flooding from the dam. The design phase of the project commenced in 2005 and was completed in early 2006.

The project has so far generated about 125 construction jobs in the area.

Gilboa Dam was constructed from 1919 to 1927. The gravity dam is 180ft high and is made up of an earth embankment measuring 700ft long and a concrete spillway measuring 1,324ft long.

The Schoharie Reservoir, which the dam impounds, has a watershed area of about 505km². The reservoir has a holding capacity of 19.5bn gallons.

The reservoir accounts for about 16% of the city’s water needs per year and serves a population of about nine million people.

The $24m-worth phase one, known as the Gilboa Dam Stabilisation Project, involved the installation of 79 post-tensioned anchoring cables measuring 30.5m to 73m in length. Five drilling rigs were used to install the 79 anchoring cables, out of which 47 anchors were drilled vertically through the dam crest.

"The gravity dam is 180ft high and is made up of an earth embankment measuring 700ft long and a concrete spillway measuring 1,324ft long."

Phase two involved the installation of spillway crest gates. Phase three A of the project included site preparation works, which were completed in March 2011. Phase three B, which is currently being carried out, involves the reconstruction of the dam and construction of a low level outlet.

Phase four will comprise of rehabilitating the Shandaken Tunnel Intake Chamber, which will be completed in 2018. Phase five will include site works, to be completed by 2022.

Reconstruction of the main spillway and the installation of the new release tunnel around the dam from the reservoir into the creek will witness the reinforcing of 234 million pounds of concrete.

The project also necessitated the installation of two temporary siphons prior to the construction of the outlet release tunnel. The siphons, installed by April 2013, are capable of releasing 250 million gallons of water a day. Other ancillary works for the project include site preparation and construction of access roads.

The construction management services for the project are being provided by Dvirka and Bartilucci Consulting Engineers (D&B) and HAKS.

Nicholson, a subsidiary of Soletanche Bachy, was contracted to carry out the installation works for the dam’s stabilisation project. Thale Construction was involved in carrying out the site development works for Phase three A of the project.

Barnard Construction, in collaboration with DAC, is currently involved in the reconstruction works for the project.

D.A. Collins (DAC) installed a debris barrier across the Schoharie Reservoir, including four siphons, to lower the elevation of water at the reservoir, as part of a contract worth $3.5m.

The US Army Corps of Engineers (USACE) is on the verge of completing foundation remediation works for the Wolf Creek dam.