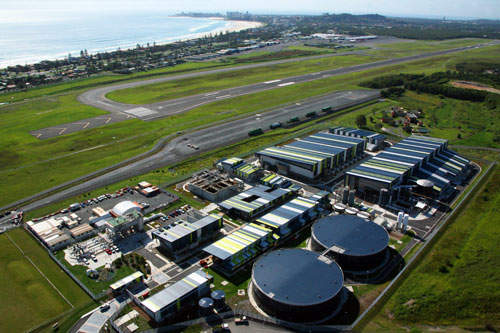 An aerial view of the Gold Coast Desalination Plant with the beach and ocean in the background. 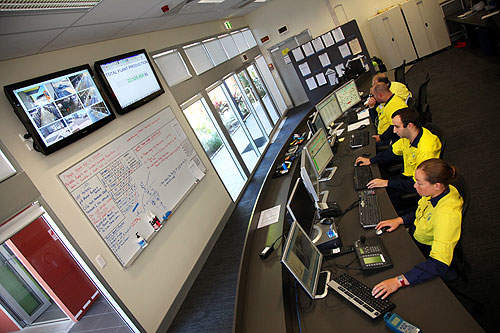 Inside the control room of the Gold Coast Desalination Plant. 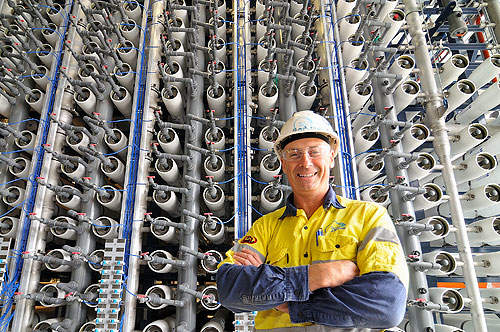 Reverse osmosis is at the heart of the desalination process. 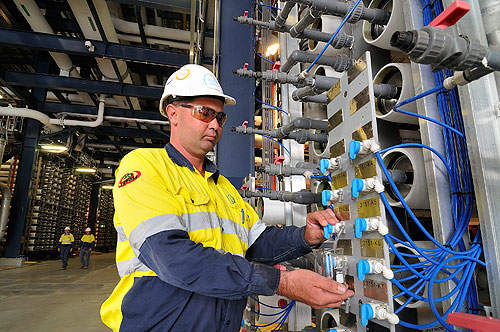 Taking samples of water that have passed through the reverse osmosis units. 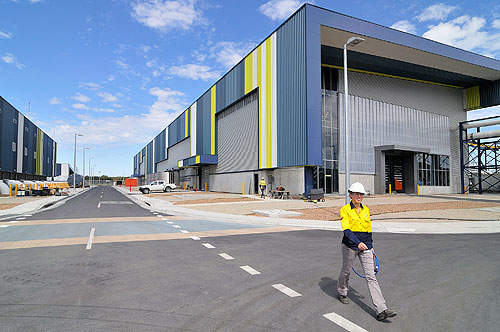 On site at the Gold Coast Desalination Plant, Australia.

The Gold Coast Desalination Plant is a reverse osmosis (RO) seawater desalination facility located in Tugun, adjacent to Gold Coast Airport, South East Queensland. The plant became operational in February 2009 and was officially handed over to the state government in October 2010. The project required an investment of $1.18bn (A$1.12bn).

With a production capacity of 133ML of water per day, the plant can serve 665,000 residents. The plant can be operated at 33%, 66% or 100% capacity as required. In order to meet demand and maintain current water quality, it is being operated at 66% capacity.

In 2009, the plant was named Global Membrane Desalination Plant of the Year by Global Water Intelligence. It is the largest sea water desalination plant built on the eastern seaboard of Australia.

“The Gold Coast Desalination Plant has a daily capacity of 133Ml.”

In order to ensure uninterrupted supply of water even during drought spells, Gold Coast City Council conceptualised and developed the Gold Coast Desalination Project in late 2005. To implement the project, the Council selected an alliance of companies for the design, construction, commissioning and operation of a 55Ml per day desalination plant in 2006.

Following the Queensland Government’s decision to invest in the project in mid-2006, the two parties became 50:50 partners in the project and the design capacity was consequently increased to 133Ml per day.

Early works on the site began in September 2006. A dedicated special purpose vehicle (SPV) was announced in November 2006 to oversee and manage the project, which was already under construction.

First desalinated water was produced in November 2008 and the plant began supplying water to the Water Grid in February 2009. Operational handover took place in August 2009. Fluoridation works were completed in December 2009 in accordance with the Queensland Government policy.

As well as the RO desalination plant, the project involved the construction of 1.5km marine intake and outlet tunnels, a 25km pipeline to connect the plant to the South East Queensland water grid, a 1,900l per second pump station and a 125Ml reservoir.

“In 2005 South East Queensland experienced the worst drought in its history.”

Built over an area of six hectares at Tugun, the plant is one of the most energy-efficient in the world. It has an average efficiency of 3.58kWh per cubic metre.

Each RO train is fitted with dual-work exchanger energy recovery devices, which recover up to 97% of unused energy from the brine. Renewable energy certificates are being used to fully offset carbon emissions from the plant.

The inner diameter of the tunnels is 2.8m. The tunnels are incorporated with six segment rings, 200mm thick, and are made up of steel fibre reinforced concrete.

Purpose of the Gold Coast project

In 2005 South East Queensland experienced the worst drought in the state’s history. The previous six years were not encouraging with rainfall remaining below average. As a result, water storage levels in the region fell to very low levels. High population growth also resulted in water shortages.

To deal with the severe water crisis and provide the region with a non-climate dependent water source, the Queensland Government decided to build the desalination plant at Tugun. The plant is now supplying water to the Gold Coast and South East Queensland.

The captured seawater is first screened to remove particles that are larger than 3mm. The screened water is then pre-treated to take out minute suspended solids by adding a coagulant. The suspended solids are filtered out by passing the water through settlement tanks, which contain coal and sand.

The pre-treated water is then fed to the SWRO process, which uses a two-pass system. The first pass is used to remove salt, minerals and other microscopic particles. Boron and bromide specifications of the final water quality are achieved in the second pass.

Because the water coming out of the RO process contains no minerals, it is re-mineralised by adding lime and carbon dioxide. The water is then disinfected by adding chlorine.

“The Gold Coast Desalination Plant is owned by Water Secure.”

The Gold Coast Desalination Plant project was sponsored by Gold Coast City Council and the Queensland Government. The plant is owned by Water Secure.

The design, build and operate project was undertaken by the Gold Coast Desalination Alliance, which comprises Veolia Water, John Holland, SKM and Cardno. The alliance is responsible for operating the plant for ten years.

Detailed designs for the shafts, tunnels and marine seabed risers were provided by Halcrow. Steel fibre reinforced concrete segments were supplied by Bosfa. BlueScope Lysaght supplied and installed the cladding system for ten buildings at the plant. GHD provided the plant’s preliminary design.