The last phase of the tunnel excavation works was completed in May 2014. Image courtesy of The Robbins Company.

Assembling of Robbins TBM in its US manufacturing facility. Image courtesy of The Robbins Company. 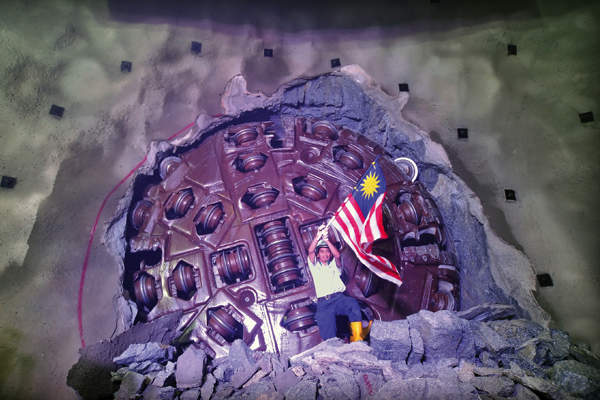 The ground breaking ceremony held in August 2010 in Karak, Pahang. Image courtesy of The Robbins Company. 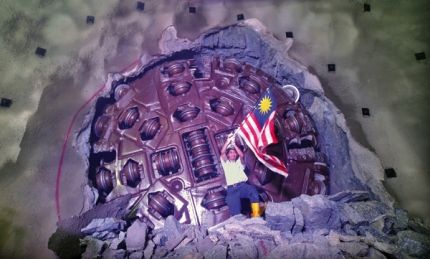 Pahang Selangor Raw Water Transfer Tunnel is a huge gravity-driven raw water transfer tunnel being constructed by the Malaysian Ministry of Energy, Green Technology and Water (KeTTHA). The project involves construction of three tunnels measuring 44.6km-long, making it the world’s 11th longest tunnel and the longest in South-East Asia. Construction activity started in 2010 and the excavation works were completed by May 2014.

The water tunnel is being built as part of the Pahang Selangor Raw Water Transfer (PSWT) project aimed at supplying raw water from the River Semantan to the states of Pahang, Selangor, Kuala Lumpur and Negeri Sembilan.

Japanese companies Shimizu Corporation and Nishimatsu formed a joint-venture (JV) with local companies IJM and UEM Builders to excavate the tunnel. The project was financed through a loan provided by Japan International Cooperation Agency.

Details of the PSWT project

The Angola WTP supplies water from Xangongo to Ondjiva, located in the province of Cunene in southern Angola.

The components of the RM2.48bn (approximately $766.87m) PSWT project include a transfer tunnel, 35m-high Kelau Dam with an effective capacity of 299 million cubic meters and the Semantan intake facility. Construction of a pumping station, dual water pipelines, access roads and a telemetry system are also part of the project.

The later part of the project will involve the construction of Langat 2 water treatment plant (WTP) in Hulu Langat and a distribution system downstream. The WTP, to be built with an estimated investment of RM3.74bn (approximately $1.16bn), will have a capacity of 1,200 million litres per day.

Water to the tunnel will be supplied through an 858m-long inlet conduit structure and pumping station located in the Pahang River Basin. Outlet structures in Selangor will transfer the water to the new treatment plant.

Construction of the transfer tunnel

The 44.6km-long, 5.23m-diameter tunnel starts at Karak, Pahang, running deep under the ground up to 1,200m below the Titiwangsa mountain range and hot springs. It has the capacity to discharge 27.6m³ of raw water per second.

Construction works involved excavation using tunnel boring machines (TBM) for 35km, while the remaining length was excavated by conventional drilling-and-blasting or by cut-and-cover. The upper and lower ends were excavated by New Austria Tunnelling Method (NATM). The tunnel will convey 1.89 million litres of raw water daily from Sungai Semantan in Pahang to the Hulu Langat WTP in Selangor.

Contractors and suppliers for PSWT

"Construction activity started in 2010 and the excavation works were completed by May 2014."

The fibre mortar shotcrete used in the tunnel was supplied by Japanese companies Denka and MCM, while Double Equipment Company provided crushing equipments.