Design and build, operate and maintain 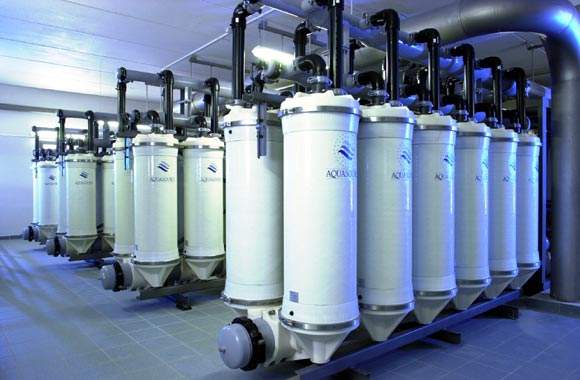 A Degrémont membrane array similar to those for use in the new seawater reverse osmosis (SWRO) plant which, when completed, will be the largest of its kind in the southern hemisphere. 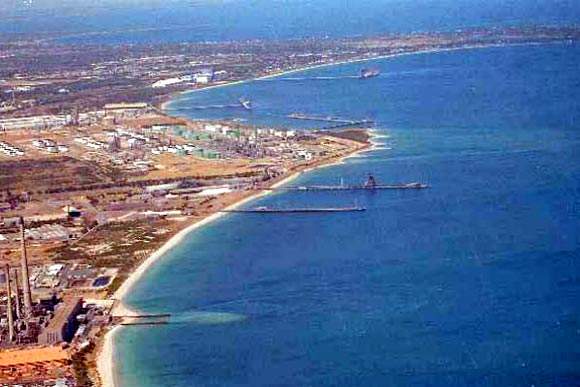 The plant will draw feed water from the Cockburn Sound and subsequently return the concentrate stream. These waters are environmentally sensitive and strict safeguards have been put in place to protect any damage to the habitat. 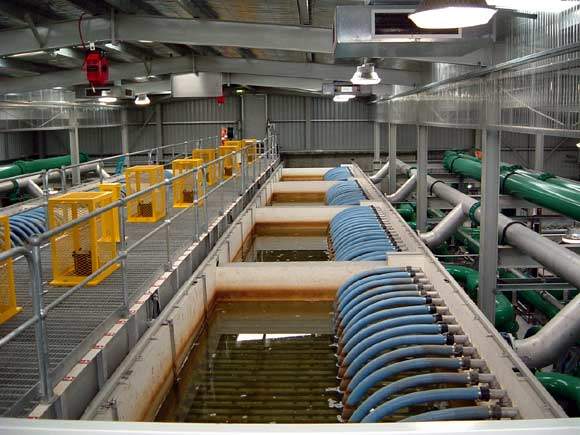 Kwinana, where the new desalination plant is being built, is Western Australia's centre of heavy industry and lies some 25km to the south of Perth; the area is already home to a major new water reclamation facility. 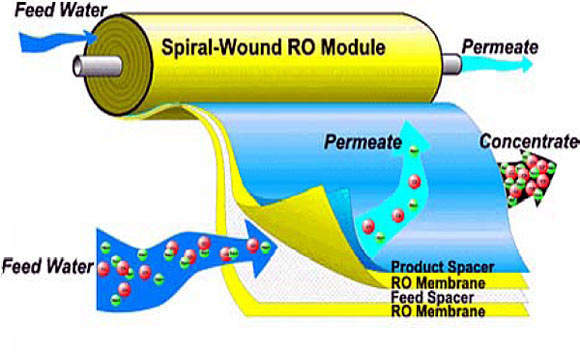 Schematic of the RO process, which uses a spiral-wound membrane module. 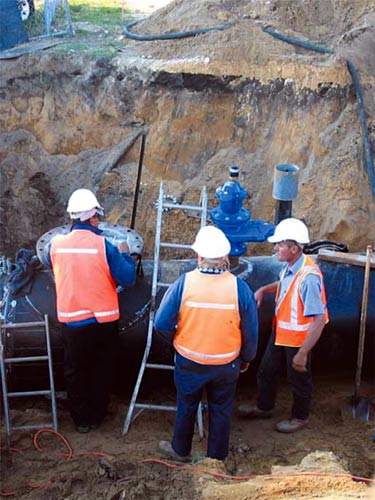 Work commenced on the project in April 2005; construction of the pumping station followed in May and the pipeline construction began in September. 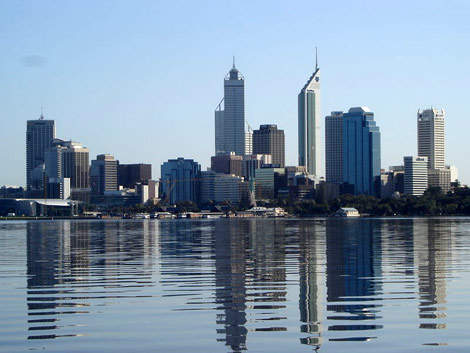 Although Perth sits on the Swan River, a growing population coupled with a climate becoming hotter and drier has put increasing pressure on the city’s water resources. 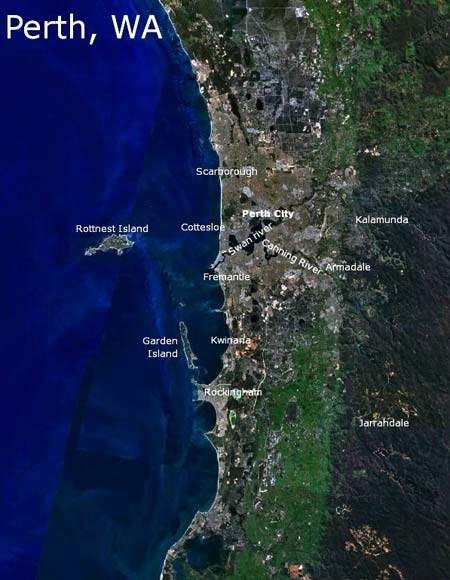 Aerial view of the new plant during construction. The completed facility supplies 17% of Perth’s needs and is the largest single contributor to the area’s integrated water supply scheme. 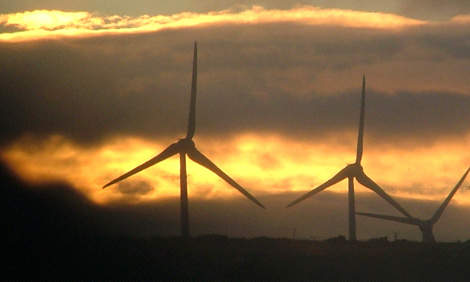 Satellite image showing the main areas of population in the Perth area. The new plant is located at Kwinana, some 25km south of the city.

With the official opening of the Perth Seawater Reverse Osmosis Plant in November 2006, Western Australia became the first state in the country to use desalination as a major public water source – and this may be simply the beginning. Facing a drying climate, the Water Corporation of Western Australia is actively exploring a variety of options to meet growing demands, which makes building a second SWRO facility a serious prospect to consider.

Located at Kwinana, some 25km south of the city, the new plant has an initial daily capacity of 140,000m³ with designed expansion to 250,000m³/day, making it the largest of its kind in the southern hemisphere and the biggest in the world to be powered by renewable energy. Ultimately supplying 17% of Perth’s needs, the plant will be the largest single contributor to the area’s integrated water supply scheme and provide an annual 45GL, to help serve the 1.5 million population.

“Supplying 17% of Perth’s needs, the plant will be the largest single contributor to the area’s integrated water supply scheme.”

The project was delivered under an alliance arrangement, implemented in two phases covered by separate Design/Construct and Operate/Maintain contracts. The Multiplex Degrémont Joint Venture was selected to build the plant along with the seawater intake, pre-treatment and product water facilities, pipeline and new pumping station required by the project.

Degrémont is the plant operator for the 25 years of the contract, in alliance with the Water Corporation.

The total project cost was AUS$387m, with annual running costs of under $20m – less than one dollar per week per household. The anticipated water cost has been estimated at $1.17/kl.

Growing concern over the dwindling natural supplies of water across the region in the wake of the hotter, drier shift in the climate acted as the main driver on the project. The winter of 2001 saw the poorest inflow of water to the reservoirs serving the Perth metropolitan area since 1914 and by 2002 it was clear that the region was suffering the worst two-year drought on record. In 2005, it was confirmed that in the eight years from 1997 stream flows had dropped to an annual average of 115GL compared with the 161GL/yr over the previous 23 years (1974–1997).

The initial response was to implement a medium-term drought recovery plan, which included restrictions on sprinkler use, obtaining a temporary increase in groundwater allocation and the provision of $142m to further augment supply capacity.

This led to the construction of three bores into the Yarragadee aquifer deep below Perth’s northern suburbs and a further nine into the shallower aquifer at Mirrabooka. Two new dams were also constructed in the South West, where rainfall is naturally more plentiful – at Samson Brook and Wokalup Creek.

By 2004, these combined initiatives had added nearly 40GL of water to the municipality’s integrated supply system.

To safeguard the future of supply in the longer term, the Water Corporation have adopted what they have termed a ‘security through diversity’ strategy. Competitive tendering for the new plant design began in September 2004 between pre-qualified consortia and bids were received in the following February. In April 2005, the contract for the plant was awarded and construction began almost immediately, with work beginning on the pumping station in May and pipeline construction in September.

The Cockburn Sound is an area of environmental sensitivity so the potential impact of the new plant on this water has been extensively considered and strict monitoring conditions have been imposed on TDS, temperature, DO and the sediment habitat in the vicinity.

The plant is designed to operate continuously, drawing water with an input salinity of 35,000mg/l to 37,000mg/l at 16°C to 24°C via the new intake structure. This amounts to under 0.02% of the water in the sound being removed per day, which first passes through a pre-treatment filter to protect the pores of the membranes, before being forced through the spiral wound membrane elements of the RO treatment trains.

After treatment, the product water is treated with lime, chloride and fluoride before being stored and ultimately being blended with water from other sources and entering the municipal integrated supply system. The filter backwash and concentrate stream is returned to the sound.

Although the concentrate flow is about 7% salt, the discharge nozzles are designed to act as diffusers, ensuring that mixed water salinity falls to less than 4% within 50m of the discharge point. As a result, there will be less than 1%
increase in the salinity of the receiving waters.

Electricity for the desalination plant – which has an overall 24MW requirement and a production demand of 4.0kWh/kl to 6.0kWh/kl – comes from the new 80MW Emu Downs Wind Farm, which consists of 48 wind turbines located 30km east of Cervantes. Developed by Stanwell Corporation, a power generation corporation owned by Queensland Government and Western Australia’s Griffin Energy, this facility commenced operation in 2006.

By 2010, around 107GL/year of new water will be needed to meet the rising demands of a growing population. While the new SWRO plant will contribute 45GL of this, the need for a further source is inescapable and the Corporation has accordingly been examining a number of options, with additional extraction from the South West Yarragadee aquifer being their preferred one.

The necessary environmental approvals have not yet been gained, though the Environmental Protection Authority did give the project conditional support in December 2006 and full agreement is expected to follow later in 2007. However, a second desalination plant remains a firm possibility at some point in the future to help secure water supplies until 2015 and beyond.

McConnell Dowell Constructors were the subcontractors on the mechanical installation works and the lime systems were provided by Transmin. Western Power is the energy supplier, using renewable power from the wind farm developed by Stanwell Corporation and Griffin Energy.