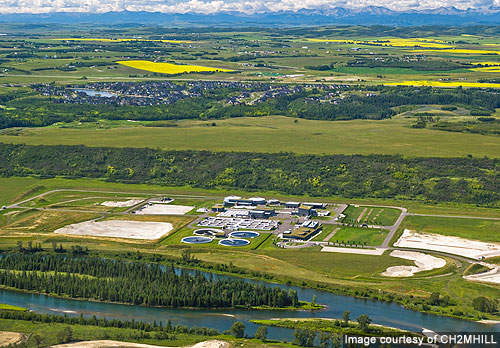 The Pine Creek Wastewater Treatment plant was officially unveiled in May 2010. 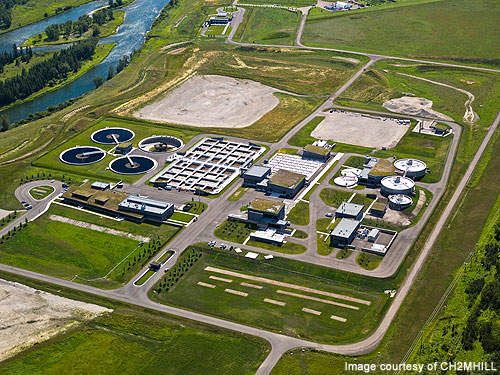 Pine Creek WWTP is the most technologically facility in Canada. 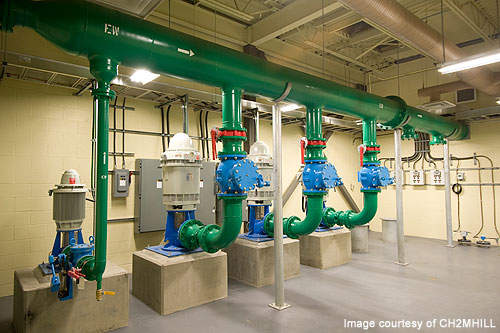 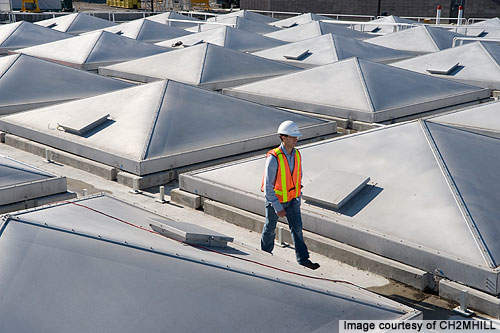 Primary clarifier covers at the WWTP. 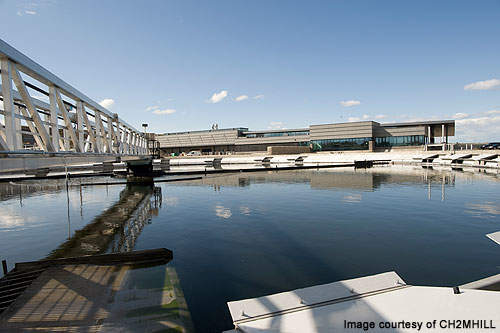 One of the four secondary clarifiers at the Pine Creek WWTP.

The City of Calgary officially unveiled its advanced Pine Creek Wastewater Treatment Plant (WWTP) in May 2010. Built at a cost of $430m, the new plant is one of the most technologically advanced and environmentally friendly facilities in Canada.

The facility can treat up to 100 mega-litres of wastewater per day (ML/d) to serve a population of 250,000 for the next 10 years. The capacity is expandable to 700ML/d which will enable it to serve 1.75m people in future.

The new facility occupies a portion of a 320 acre site and produces the highest quality of treated effluent in the region. Construction of the facility commenced in 2004 and completed in November 2009.

It was proposed in 2001 that it was necessary to find a sustainable solution to Calgary’s growing wastewater treatment needs. Prior to construction of the Pine Creek plant, Calgary had two WWTPs at Fish Creek and Bonnybrook. These two facilities had been facing capacity issues to treat the wastewater generated in the City.

“Prior to construction of the Pine Creek plant, Calgary had two WWTPs at Fish Creek and Bonnybrook.”

The plant is equipped with four conventional primary clarifiers. Each clarifier is 50m long and 12m wide with a peak overflow rate of 100m³/m²/d when all clarifiers are in operation. Four 12L/s primary sludge pumps and three 15L/s primary scum pumps are also part of the clarifiers.

Four secondary clarifiers with a diameter of 47m are also part of the facility. Each clarifier features an energy dissipating centre well and a flocculation well. They also feature launder covers, which stop the growth of algae and Stamford Baffles which help in settling more solids in the clarifiers.

For tertiary filtration, 12 effluent filtration modules are used at the WWTP. The filters feature 12 fabric disks per module with a filtration surface area of 5m² per disk. The technology was chosen because it reduces the facility’s footprint, lowers the capital cost and generates low backwash volumes.

The treatment process used at the plant involves three steps. The wastewater is first screened and grit removed. The effluent is then fed into the primary clarifiers to remove settleable solids and scum.

The next step is the biological nutrient removal (BNR) process known as the West Bank process. In this process, effluent from the primary clarifiers is sent into three zones of the BNR bioreactors – the pre-anoxic, anaerobic and anoxic zones. Naturally occurring micro-organisms are used to remove phosphorus and nitrogen from the wastewater.

The final step in the treatment process includes ultraviolet (UV) disinfection in which treated water from the effluent filters is disinfected using UV light. This method eliminates the harmful effects caused by chlorination and dechlorination. The disinfected water is released into the Bow River using diffusers built below the riverbed.

Advanced measures have been taken to reduce the plant’s environmental impact on the surroundings. The facility’s Operations, Maintenance & Administration Building has achieved Gold certification under the Leadership in Energy and Environmental Design Programme.

About 5,500m² of green roofing has been provided to several buildings of the facility. Recycled and low-emitting materials have been used in the plant. Methane gas is used to heat the buildings. Wind power provides 50% of the energy required by the plant.

“The treatment process used at the plant involves three steps.”

Drought-resistant plantings have been used in the landscaping to reduce the need for irrigation. Some of the treated water will be supplied to a golf course and nursery located near the plant.

This helps the city to achieve its water efficiency goal to reduce the use of potable water for non-potable applications.

CH2M HILL was appointed as the primary consultant for the project along with Stantec, AECOM and Graham Edmunds Cartier as major sub-consultants.