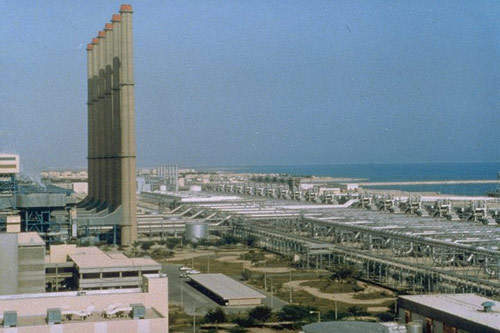 Saudi Arabia has invested heavily in water desalination facilities, such as this one at Jubail. The Shuaiba is now one of nearly 30 desalination plants in the country. 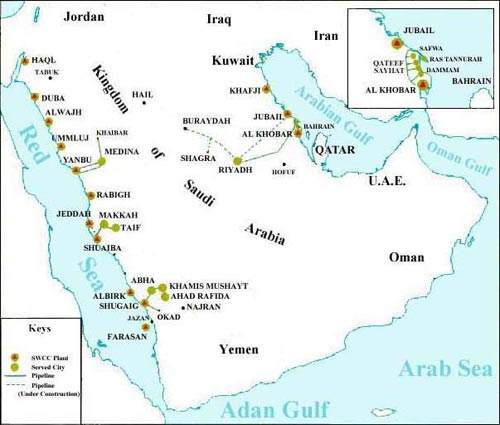 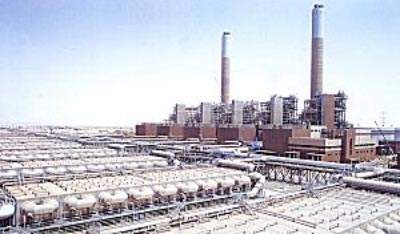 The finished desalination plant currently ranks as the largest in the world and uses multi-stage flash (MSF) distillation. 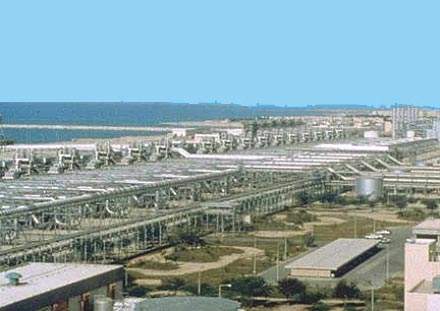 The overall development at the Shoaiba site also includes an oil-fired power station, together with a port and a tanker terminal. 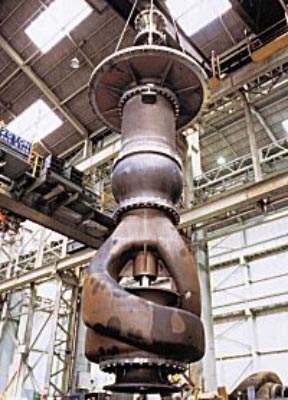 One of the 20 vertical mixed-flow brine re-circulation pumps. In all, over 100 pumps of varying designs and sizes were used in the plant.

Phase 2 of the Shoaiba Desalination Plant was completed by Doosan Heavy Industries on 17 March 2003. The finished facility, which currently ranks as the largest in the world, was constructed in two stages, for the state-run Saline Water Conversion Corporation (SWCC). In addition to the construction of the desalination facility itself, the project also involved the provision of storage tanks, a pumping station and pipelines to transport the product water.

The initial output of Phase 1 was 24.6 million m³ of water a year; Phase 2 has increased this to 150 million m³/year at an estimated total project cost of $1.06 billion.

As part of the overall development at Shoaiba, an oil-fired power station, equipped with turbines, heat recovery steam generators and ancillary power generation equipment, has been constructed adjacent to the desalination plant. The power plant forms part of an integrated operation, providing the desalination facility with steam to heat its seawater distillers, while reducing its own demands for cooling.

Work has also been undertaken on the construction of a port and tanker terminal to supply the complex.

SWCC, responsible for supplying 50% of all municipal water in the Kingdom of Saudi Arabia, took the initial decision to invest heavily in desalination against a backdrop of chronic water shortage and rising population. According to predictions from the Saudi Arabian Central Department of Statistics, the Kingdom’s total population will exceed 29 million by 2010 and rise to 36.4 million ten years later. Taking a baseline consumption of 300 litres per person per day, the resulting demand for water will increase to over 3,000 million m³/year by 2010 and nearly 4,000 million m³/year by 2020.

Saudi Arabia is now the world’s largest producer of desalinated water with desalination meeting 70% of the country’s present drinking water requirement and supplying major urban and industrial centres through a network of water pipes which run for more than 2,300 miles. Several new desalination plants are planned, or under construction, which will ultimately bring the final total to almost 30 such facilities.

The Shoaiba plant uses a Multi-Stage Flash Distillation (MSF) process, reflecting an ongoing trend of renewed interest in this technology within the Middle East market. This has come about for a number of reasons. In particular, the price of the units themselves has dropped greatly over recent years, which is of particular importance for very large plant installations. The efficiency of MSF, which has been appreciated for years, combined with their relatively low maintenance demand further enhances their appeal for the sort of large-scale applications required in the region. In addition, the necessity for the extensive pre-treatment of raw seawater intake demanded by alternative technologies, particularly reverse osmosis, have led to a fall in their popularity in some quarters of the Middle East. Although reverse osmosis plants are more numerous, MSF systems presently account for over 85% of the world’s desalinated water.

At Shoaiba, low grade steam from the adjacent power plant’s steam turbine exhaust, or from the bypass station if the steam turbines are out of service, is used to heat the tubes within the distiller units’ brine heaters, which in turn heat the seawater intake. The heated seawater then passes into a low-pressure vessel, where it boils rapidly and “flashes” into steam.

This is condensed on heat exchanger tubes, cooled by the incoming feed water flow to the brine heater. This, in turn, warms up the intake water itself, reducing the amount of thermal energy needed in the brine heater.

In practice, only a small percentage of the seawater is converted to steam, depending on the ambient pressure maintained in the vessel, since vaporisation swiftly causes the water to cool to below boiling point. Thus, multi-stage distillation makes use of a series of stages set at increasingly lower atmospheric pressures, allowing the feed water to pass from one to another, repeatedly flashing, without adding more heat. However, there are limits on the number of stages, since one of the major factors affecting the thermal efficiency of MSF plants is the temperature difference between the brine heater and the final condenser at the cold end of the plant. While operating a plant at the upper temperature limit of 120°C leads to increased efficiency, it also increases the potential for detrimental scale formation and accelerated corrosion of metal surfaces. At Shoaiba, these problems have been largely addressed by matching the MSF performance to the optimum plant power and steam cycles, together with the use of corrosion-resistant coatings and alloys.

Over 100 pumps are used in the plant and in a wide range of capacities. Small vertical mixed flow pumps were installed for brine blow down, while much larger ones were used as the main cooling water pumps and for brine re-circulation and discharge. The brine heater condensate used horizontal centrifugal pumps, while horizontal double suction types were specified for the distillate.

The product water is subsequently re-mineralised to make it palatable and held in storage tanks prior to delivery via the plant’s new pumping station and the water transmission network. Water produced at Shoaiba supplies Jeddah, Makkah and Taif.

A partnership between Bechtel and Doosan (then known as Hanjung) formed the lead contractor for Phase 1 of the plant, with Doosan taking on the role for Phase 2. Torishima supplied the pumps, Albilad the complete fire protection and alarm system, and Samshin the valves. Poongsan provided the ACR and alloy tubes used. Archirodon worked on the pipelines and seawater intake structure. They also worked on the construction of the tanker terminal, together with Harbour and Marine Engineering. C&J Engineering were responsible for coating the plant’s flash chambers. Other firms involved included Young Poong, Salumco and Gemco.