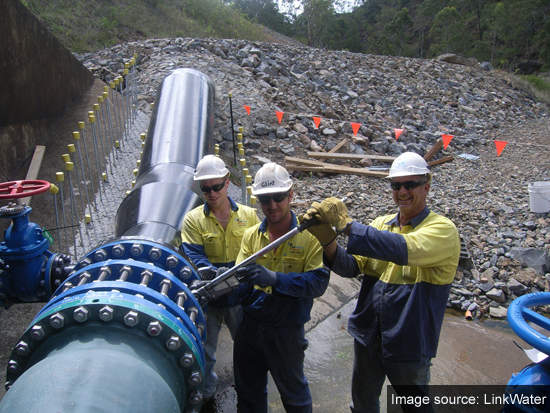 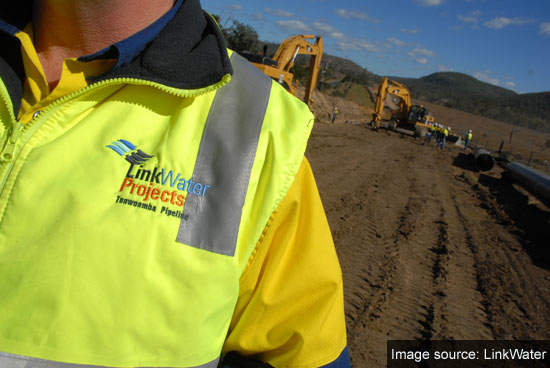 Construction of the Toowoomba Pipeline underway 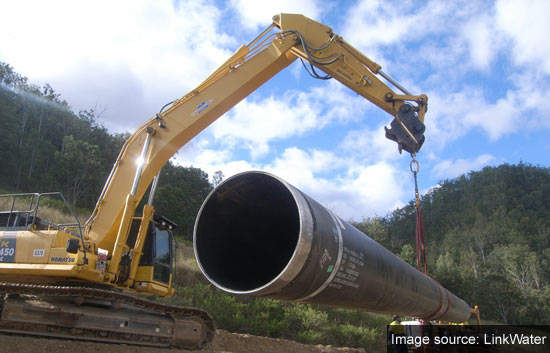 A pipe segment being lowered into the trench 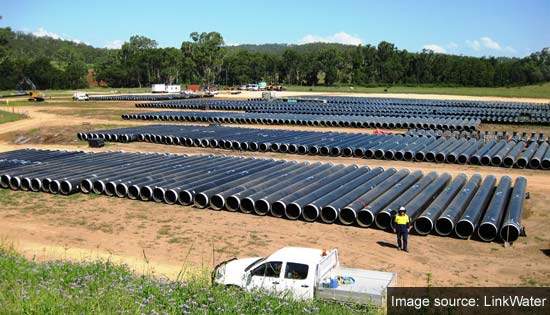 Stockpile of the pipe at the Kipper Creek laydown 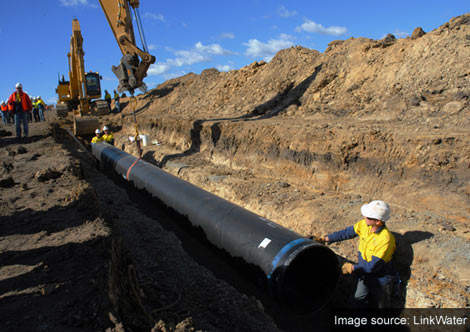 Toowoomba Pipeline team position the pipe to mark 60% of pipe in the ground. 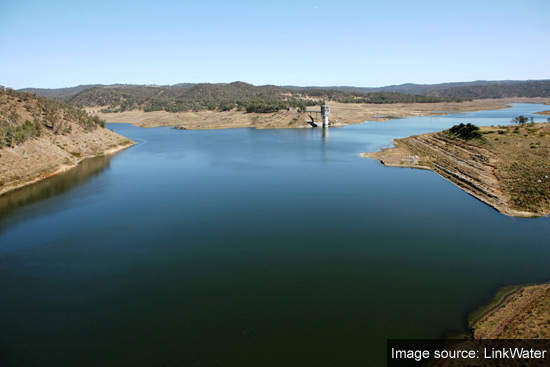 The completion of the Toowoomba Pipeline has brought water security to the city, located in South-east Queensland, Australia. Construction of the project began in January 2009 and the first pipe was laid in March 2009. The project was completed and commissioned on time in January 2010 at a cost of A$187m.

The Toowoomba Pipeline is a 38km pumped raw water pipeline that runs from Lake Wivenhoe to Lake Cressbrook.

The pipeline and its related pump station infrastructure, which is currently under a 12 month defects liability period (ending March 2011), will be transferred to the ownership of the Toowoomba Regional Council after the completion of the period.

The Toowoomba Pipeline project was proposed in 2006 by the Toowoomba Water Supply Task Force to secure water supply for the city and adjoining areas. It is currently operated and maintained by LinkWater Projects.

“In its first year the plant will deliver 10,000 mega litres of water to Toowoomba.”

A fund of A$20m was sanctioned by the Queensland Government in January 2008 for speedy completion of the design and investigations phase. An additional amount of A$167m was committed by the government in July 2008 to complete the project by 2010.

The project was designed and constructed by joint venture Toowoomba Pipeline Alliance of LinkWater Projects, Clough, Diversified, and AECOM. As a partner, AECOM was responsible for environmental assessment and approvals, detailed design and documentation, land access, geological and geotechnical engineering, and community engagement and stakeholder management.

Pronamics provided Expert Estimation software, which was used by the cost planners for developing a high level estimate for the project’s business case. Aconex provided its online collaboration system to streamline communication and information-sharing between the involved organisations.

Australia suffered the worst drought in its history in 2008. High regional population growth of Toowoomba had led to the shortage of drinking water. Surface water supplies that feed around 83% of the city’s population were also expected to dry out by 2010.

Fear of a drinking water crisis was further increased when Toowoomba’s dam was levelled at under 9% in November 2009. At that time it was predicted that the dam would be completely depleted by September 2010.

To save the city from water shortage, the Queensland Government invested A$187m to ensure a secure, reliable and long-lasting supply of drinking water. Construction of an underground pipeline was proposed in 2006 to deliver water from the Wivenhoe Dam to the Cressbrook Dam.

The components of Toowoomba Pipeline project include the placement of an underground water pipeline running 38km from Wivenhoe Dam to Cressbrook Dam, and construction of a high-lift pump station, a break tank, a low-lift jetty intake structure, a pipeline swabbing system and an adjacent maintenance track.

The plant, in its first year of operation, will deliver 10,000 mega litres of water to Toowoomba.

The 38km long Toowoomba Pipeline is designed to transfer water in only one direction, east to west. It passes through rural and forest areas within the boundaries of Somerset Regional Council.

“The Toowoomba Pipeline project was proposed in 2006 by the Toowoomba Water Supply Task Force.”

The route of the pipeline, from there, is changed by the Toowoomba Regional Council by engaging its own existing infrastructure.

The 762mm diameter, mild steel cement lined (MSCL) pipe has been laid at least one metre below the surface of the earth. The length of the pipes ranges from 6m to 13.5m and the wall thickness is between 5mm and 6mm.

Techniques such as rubber ring joints, socket slip joints, conventional welded spigot, and split weld coupling configurations were used to articulate the pipes along the project.

Water from Lake Wivenhoe is transported and stored in onshore tanks through low lift pumps. These pumps can withdraw water until the lake is emptied to 10% of its storage level. The water from onshore tanks is then delivered to Lake Cressbrook through a high lift pump station at a rate of 39 mega litres a day.