Stage 2 to be Completed 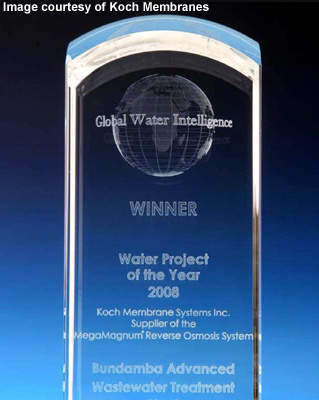 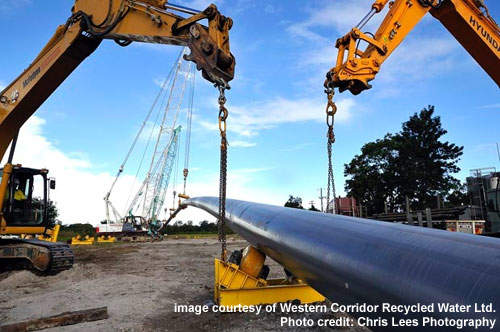 Pipeline being prepared for horizontal directional drilling beneath the Brisbane River. 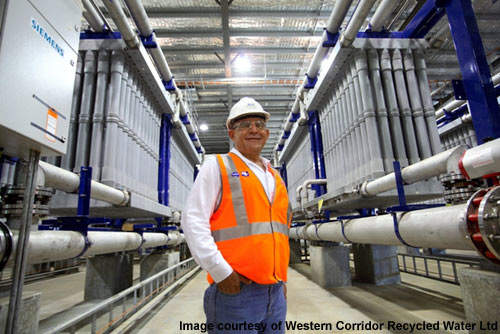 The $2.5bn (AUS) Western Corridor Recycled Water Project was completed in December 2008. It is the largest undertaking of its kind in Australia and is ranked as the world’s third-biggest recycled water scheme to date.

Forming a key element in the $9bn South East Queensland Water Grid – the largest urban drought initiative in Australia – the project has a supply capacity of just over 230 megalitres a day (mld). In April 2008, the new Bundamba treatment plant won the Global Water Intelligence water project of the year award.

The principal aim of the work was to help ensure the security of South East Queensland’s water supply by reducing the dependency on sources vulnerable to climate change and make purified recycled water available to power stations, industry and agriculture and for indirect potable reuse.

“The finished project will have a supply capacity of just over 230mld of water.”

To accommodate the scale of the work, five project alliances were formed to deliver the main elements, using the expertise of some of the world’s leading names in engineering, construction, and water and wastewater management.

The cost of the project was met by a $2bn contribution from the Queensland Government and $408m from the Australian Government via the Water Smart Australia Programme.

The project was developed against a background of a protracted record drought affecting South East Queensland, which had a significant effect on the region’s water supply. With concerns over climate change mounting and Australia seemingly destined to become increasingly drier, securing alternative sources assumed a growing importance.

The South East Queensland Water Grid was devised in response, aiming to connect the area’s dams, reservoirs and other storage systems, to allow water to be moved to meet local needs, enabling the state government to manage growth in the region.

This initiative also added desalinated and purified recycled water into the supply system, with the Western Corridor Recycled Water Project having the capacity to contribute up to a total of some 232mld.

The three AWTPs at Bundamba, Luggage Point and Gibson Island form the core of the project, each taking wastewater that has been treated to secondary level at nearby WWTPs. Pre-treatment at the Bundamba and Luggage Point consists of flocculation, with Gibson Island using high-rate Actiflo clarification to reduce the soluble phosphorus. The subsequent advanced treatment regime is the same for each plant.

Microfiltration forms the first step, the flow passing through hollow fibre membranes with a pore-size of 0.1µ – 0.2µ to exclude particles, microbes and certain viruses. The filtrate then undergoes reverse osmosis (RO) to remove dissolved salts and organic compounds, and any remaining viruses.

The award-winning Bundamba plant features the world’s largest commercially available RO elements – Koch Membrane Systems’ MegaMagnum units – arranged in four trains, operating in parallel. The provision allows for any three to meet the plant’s design capacity, with one in reserve, each train consisting of a first pass RO system in a 7:4:2 configuration and a 4:2 vessel array making up the second pass, achieving an operational recovery rate of about 85%.

Finally, in the advanced oxidation stage, the permeate from the RO units is exposed to high UV-light levels and hydrogen peroxide to eliminate any recalcitrant residual chemicals that remain. The water at this stage has a low alkalinity and is soft; stabilisation and disinfection involves dosing with lime and carbon dioxide to create hardness and improve alkalinity, while chlorine is added before the product water is pumped to storage ahead of distribution.

Stage 1A, completed in August 2007, involved the construction of the Bundamba AWTP, 7km of pipeline from the plant to the Swanbank Power Station and three parallel 9.6km pipelines from Oxley to Bundamba. The power station receives 20mld, which means it no longer draws water from Wivenhoe Dam to meet the demands of its cooling processes.

In stage 1B of the project, as well as further work to the Bundamba plant, 12.6km of pipeline was installed from Oxley to Goodna and more than 80km from Bundamba to Caboonbah. Three raw water balance tanks were built at Oxley, Wacol and Goodna, and two treated water balance tanks and four pumping stations were also constructed. The project is now providing up to 20mld to Tarong North Power Station, so that both Swanbank and Tarong power stations are no longer reliant on Wivenhoe Dam for water supplies.

The Bundamba advanced water treatment plant achieved practical completion and was handed over to the project in July 2008.

During the construction, Veolia Water Australia managed the project assets and infrastructure development, and was responsible for the subsequent operation of the plants and pipelines.