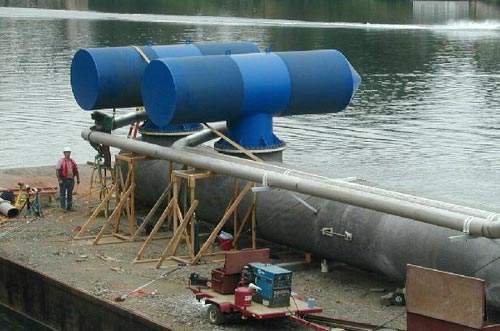 Intake screens awaiting positioning during the construction work. The plant takes raw water from the mid-flow of the Willamette River. 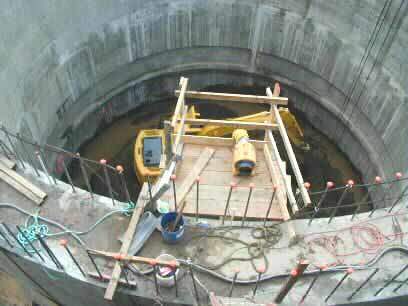 Excavation on the Caisson in November 2000. 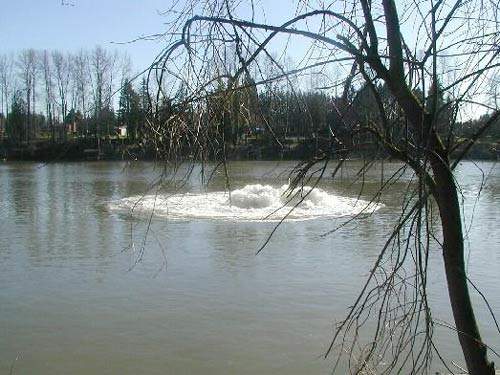 Periodic air back-flushing is used to clean the intake screens of accumulating debris. 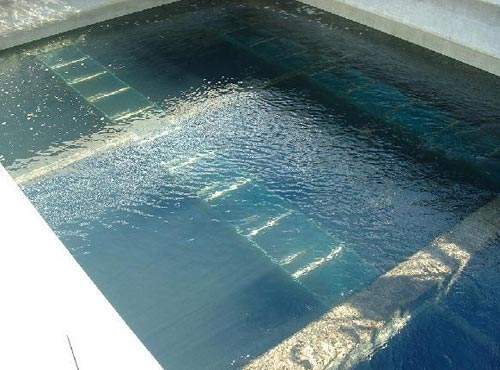 The finished filter in operation. 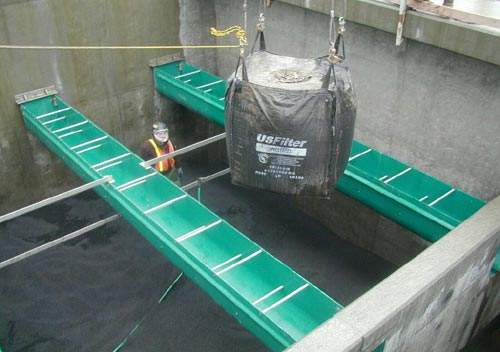 The filter during construction. It consists of a granular activated carbon filter and a polishing sand filter, 2m and 30cm thick respectively. 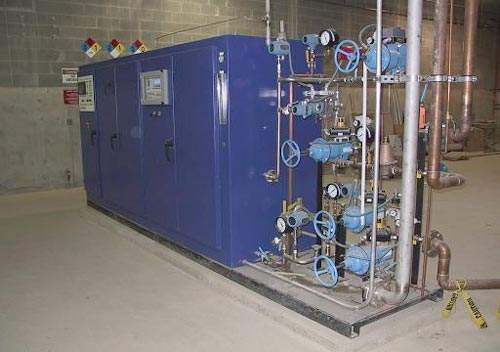 The plant's ozone machine generates the ozone required for disinfection, which is then bubbled through the water. Residual ozone is converted back to oxygen gas and released to the atmosphere. 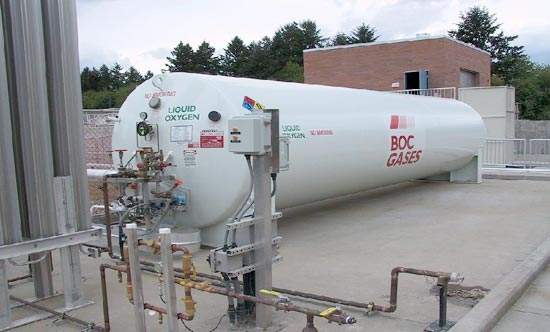 Liquid oxygen is used to generate the ozone; it is evaporated into gas and then converted on-site to ozone. 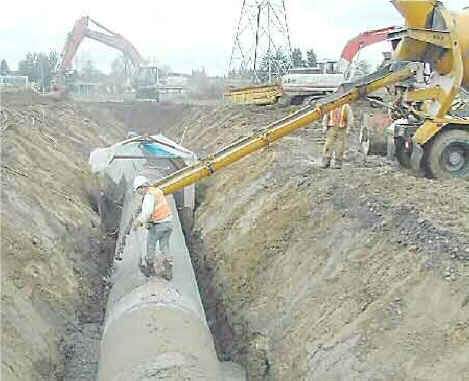 Laying the water pipeline. The Williamette plant has a submerged water intake. 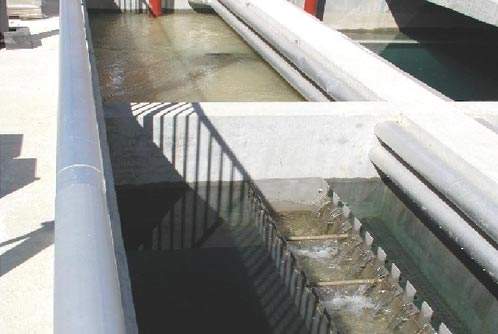 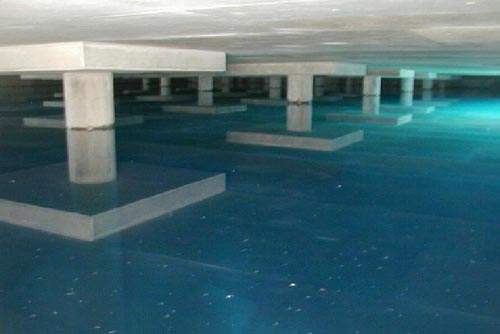 The plant's underground storage tank, where a small amount of chlorine is added to the treated water before it enters the distribution system.

In 2004, the Willamette River Water Treatment Plant won the American Society of Landscape Architect’s Award of Merit – the second honor the plant has received in the first two years since it began operating. Located close to the City of Wilsonville, to the south of Portland, the plant is one of Oregon’s largest new water supply facilities, built to provide a reliable alternative source of drinking water to the 12,000 local residents.

The design and build contract was awarded to Montgomery Watson Harza in 2000, with a 28-month period for devising the scheme, acquiring the necessary permits and construction. The plant commenced operation in April 2002, providing 11,000m³/day at first, ahead of the full initial capacity of 57,000m³/day. The design permits a final phased expansion to 265,000m³/day to cope with long-term projected future needs. Currently, the city-wide demand varies seasonally between a summer peak of 22,000m³/day and 7,500m³/day in the winter.

The overall scope of the project includes a high-service pump station, access roads and finished water pipeline, in addition to the design and construction of the raw water intake facilities and the treatment plant itself.

After completion in 2002, the $43.8 million works received its first major award – the “Best of 2002” in the category of Outstanding Public Project for Oregon.

The city’s original water supply came from a system of eight local wells. It was realized back in the 1990s that this would ultimately be insufficient for Wilsonville’s fast-growing demand and studies were implemented to determine the best course of action to ensure long-term, sustainable water resource. Pilot tests conducted during this period using conventional treatment methods confirmed that even under “worst case” conditions, treated water from the Willamette River could consistently meet drinking water standards.

However, until the issue was properly resolved, a moratorium was imposed on new development in the metropolitan area. When the state of Oregon decided to construct a new prison – the Coffee Creek Correctional Facility – in the city, the question of water supply gained additional interest and urgency and the City of Wilsonville decided upon the Willamette River WTP project in response.

Water is extracted from the Willamette River through an intake structure placed in mid-flow, above the river bottom and below the surface, to exclude both silt and floating material. Periodic air back-flushing is used to clean the intake screens of accumulating debris.

The plant uses state-of-the-art disinfection and filtration techniques, coupled with the innovative Actiflo clarification process, which leads to greatly improved settling speeds within the small footprint of the facility.

Enhanced sedimentation removes particulates which have passed through the intake screens using a combination of conventional coagulants to form the suspended materials into floc and the addition of very fine sand to increase its weight. As a result, settling occurs more quickly and more completely than under a conventional water treatment regime, which would require an area 15 to 30 times larger to achieve the same sedimentation effectiveness. The sand is subsequently reclaimed, cleaned, recycled and reused.

The water is then ozonated. This serves a number of functions, including disinfection and the breakdown of organic chemicals, enhancing the removal of organic material by the filters. At the plant, liquid oxygen is used to generate the ozone for the treatment process, being evaporated into gaseous form and then converted on-site to ozone. This ozone is bubbled through the water during the treatment process, before being converted back to oxygen gas and released to the atmosphere.

Subsequently, the flow enters a granular activated carbon filter, where any residual turbidity, pathogens or organic chemicals not already removed by the earlier treatment processes are removed, ahead of being polished in a sand filter. These filter layers are around 2m and 30cm thick, respectively.

The fully treated water flows into an underground storage tank, where a small amount of chlorine is added to prevent bacterial contamination as the water is pumped through the distribution system pipes.

The plant itself occupies a 10-acre site, of which half has been made into a nature park with a series of cascading ponds, rock walls and an open meadow which visitors are able to enjoy.

The creation of this open space was made possible by the deliberate use of efficient building design, laying all of the treatment facilities out in a compact line along the eastern boundary of the site. The selection of the space-saving, high-rate ballasted sedimentation process was particularly important in enabling the overall design goals to be achieved, which ultimately led to the recent ASAL award.

The treatment facility is effectively over-designed, with current drinking water standards achievable without recourse to such extensive treatment. In addition, the treatment plant has also been designed with redundant systems for all these processes, to maximize continuity of supply and to facilitate expected future expansion. In 2003 – the most recent year for which figures are available – the plant easily exceeded the requirements established for potable water by the US Environmental Protection Agency. None of the regulated microbial contaminants (Coliform, Faecal Coliform, Giardia, Cryptosporidium) were detected. The water was free of volatile organic compounds (VOCs) and synthetic organic compounds (SOCs) and well within limits on other parameters including the increasingly important disinfection by-products (DBPs).

The plant is owned by the City of Wilsonville and operated by US Filter Operating Services. The main contractors were Montgomery Watson Harza, with Miller Hull Partnership as architect and landscaping by Murase Associates. Others involved in the project included Slayden Construction, Natt McDougall, Tigard Electric and Landtech Solutions.