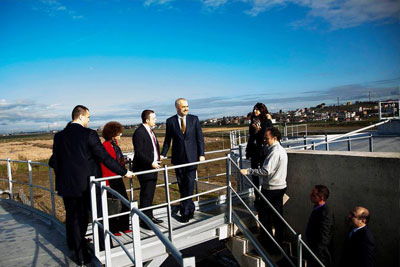 The World Bank has signed a $85.3m loan agreement with the Government of Albania to upgrade and expand the existing water supply and sewerage network in the Durres region.

Water transmission pipelines will be constructed to link villages to the city’s water supply system and reduce losses in the water distribution network. The project will also support the transfer capacity of the sewer network from the touristic beach area to the newly constructed Durres wastewater treatment plant.

The $85.3m Water Sector Investment Project was approved by the bank’s board of executive directors on 20 December 2013.

Prime Minister Edi Rama said that in the near future, the area will go from a water supply of approximately 6 hours a day to having a regular water supply.

"On the other hand, this area of touristic potential, mentioned always as the city of tourism, will not be anymore an area where embarrassingly the sewage is discharged into the sea and where people swim into the sea and sewage," Rama added.

World Bank country director for Southeast Europe Ellen Goldstein said that the project investments will nearly double the supply of water to Durres, covering the region’s water needs through 2030.

"In particular we want to support a new partnership between central and local governments, so that local governments are empowered over time to manage water utilities and take responsibilities for delivering water services directly to their population," Goldstein added.