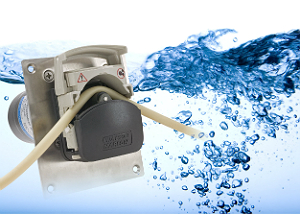 A specialist manufacturer of water quality measurement and monitoring systems is using peristaltic pump technology from Watson-Marlow Pumps Group for use in chlorine monitoring equipment after similar pumps were found to be less reliable.

With customers that include water, industrial and pharmaceutical companies, Analytical Technology Inc (ATI) designs and manufactures its products in Pennsylvania, USA. The company switched to Watson-Marlow OEM pump technology some 15 years ago for chemistry modules used in equipment types that include its A15/66 residual sulphite monitor and A15/82 fluoride monitor. Each of these units houses a Watson-Marlow 313FAC/D2 OEM pump, and this is now also the case for ATI’s more recently developed Q45H/79 chlorine monitors.

Typically, ATI’s UK subsidiary, based near Oldham, imports monitors directly from its US manufacturing headquarters. However, for one recent high profile application, the company was faced with a dilemma.

"Around two and half years ago, the demand for our chlorine monitors grew as Yorkshire Water instigated a drive away from the 24V DC pumps it used conventionally, opting in favour of fixed speed 110V AC models on the basis of cost and reliability," says ATI’s technical manager, Chris McTear.

"Our Q45H/79 Total Chlorine Monitor was the perfect fit in all ways except one – the physical footprint was too large. For this particular Q45H/79 application we had to redesign the enclosure and select a smaller pump – the 313FAC/D2, to ensure it could physically fit inside the available space envelope. As a result we now buy pumps for this monitor directly from Watson-Marlow in the UK."

While chlorine has become the most widely used disinfectant in the world, there are still some applications where monitoring chlorine residuals can present a challenge. Multiple forms of chlorine in drinking water, wastewater effluent and cooling tower water require a ‘total’ chlorine measurement to ensure that all chemical species are quantified. In some cases, the chlorine concentration is quite low and often below the detection limits of conventional monitors.

ATI’s Q45H/79 has been developed as a total residual chlorine monitor with improved sensitivity and zero stability. The monitor uses standard EPA approved iodometric chemistry where, by addition of buffer and potassium iodide, the various chlorine compounds in solution react to form iodine. The iodine released in this reaction is measured using a highly sensitive amperometric sensor capable of one PPB sensitivity, while the output of this sensor is linear with respect to concentration and provides fast response for both upscale and downscale concentration changes.

Today Yorkshire Water is replacing all of its chlorine monitors with those supplied by ATI. At current count, around 400 have already been replaced, while Thames Water, United Utilities and Severn Trent have also been increasing their uptake of this technology.

"We originally switched to Watson-Marlow as we found their pumps were cheaper to operate and more reliable," says McTear. "We had tried other pumps but it was obvious that peristaltic represented the way forward – even more so with the recent upswing in demand from water companies."

Purposely designed as a high precision OEM peristaltic pump, the Watson-Marlow 313FAC/D2 is made up of a 313D pumphead, induction motor, purpose-designed gearbox and faceplate. It is available in three standard voltages, with a choice of four speeds providing flow rates up to 1620 ml/min from 8.0 mm bore tubing (1350 ml/min if used on 50 Hz supplies). The 313D pumpheads mount to either Watson-Marlow 300 series OEM drives or the user’s own drives having the same shaft arrangement.

"Ultimately, the corporate attitude of ATI is to make high quality monitors at a competitive price, which are easy and cheap to maintain, and simple to use. This ethos fits with the Watson-Marlow peristaltic pumps and we will continue this strategy moving forward. Watson-Marlow models are now the most commonly featured peristaltic pumps in ATI water monitoring equipment," concludes McTear.