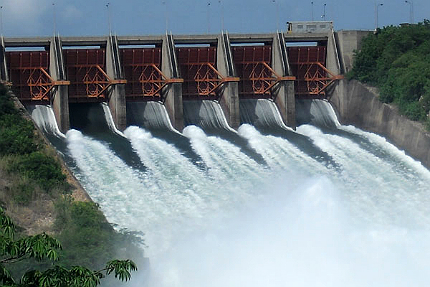 Kariba Dam is the world’s biggest dam based on water storage capacity. Located at the former Kariwa (Kariba) Gorge, the dam creates Lake Kariba, which has a storage capacity of 185 billion cubic metres of water and a surface area of 5,580km2. The Lake Kariba covers a length of 280km and is 32km wide at its widest section.

The double curvature concrete arch dam is owned by Zambezi River Authority and was constructed between 1955 and 1959 by Impresit of Italy. The dam is designed to avert a one in 10,000-year flood event.

The dam is 128m high, 617m in length, and was constructed using 1.036 million cubic metres of concrete. It comprises of two power stations generating a combined 1,470MW of energy, which constitutes approximately 60% of the hydropower outputs for Zambia and Zimbabwe.

Bratsk Dam in Siberia, Russia, ranks as the second biggest dam in the world thanks to its 169.27 billion cubic metres reservoir. The dam impounds the Angara River and the reservoir created by it covers a surface area of 5,540km2.

The concrete gravity dam is owned by Irkutskenergo and was constructed from 1954 to 1964 by Bratskgesstroy (formerly Nizhneangargesstroy management).

The dam is 125m high and 1,452m in length, and has a rail line and a highway on its top. The power plant at the dam has an installed capacity of 4,500MW comprising of 18 Francis turbines.

Akosombo dam, located in Ghana, is the third biggest dam based on water storage capacity. Constructed on the Volta River, the dam creates the 8,500km2 Lake Volta, which is the world’s biggest reservoir by surface area. The lake impounds a mammoth 144 billion cubic metres of water.

The rock-fill embankment dam has a crest length of about 700m and a height of 134m, and involved 12 million cubic metres of surface excavation. It was constructed from 1961 to 1966 primarily for the purpose of electricity generation, but also provides a livelihood for about 300,000 people through fisheries in the lake.

Volta River Authority owns the dam and IMPREGILO-Italy was the main construction contractor. The power plant at the dam consists of six turbo generator units rated at 128,000kW each. 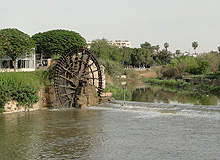 The world’s oldest dams still in use

The Daniel Johnson Dam, also known as Manic 5 Dam, impounds the Manicouagan River that creates the Manicouagan Reservoir with a storage capacity of 139.8 billion cubic metres. The reservoir, having a surface area of 1,973km2, is the fourth biggest in the world.

The dam is also touted as the world’s biggest hollowbody multiple-arch-and-buttress dam. It is 1,310.6m long and 213.97m high, and features 14 buttresses and 13 arches. It was constructed using 2.2 million cubic metres of concrete.

The dam is owned by Hydro-Québec and was constructed from 1959 to 1968. The dam’s two power stations feature 12 units with a combined installed capacity of 2,660MW.

Guri, the world’s fifth biggest dam, has a storage capacity of 135 billion cubic metres and creates the Guri Lake covering 4,000km2. The concrete gravity and embankment dam measures 1,300m in length and 16m in height, and provides for 70% of the country’s electricity needs. It is operated by CVG Electrification del Caroni CA (Edelca).

The dam’s construction was carried out in two stages, which commenced in 1963 and completed in 1986. The Guri hydropower facility has an installed capacity of more than 10,000MW. A modernisation project for the dam is also currently underway involving ABB as the main contractor.

The rock-fill dam was designed by Institute Hydroproject of Russia in collaboration with various engineers from Egypt. It was constructed from 1960 to 1968 with an investment of approximately $1bn. The dam’s power plant is equipped with 12 Francis turbines with a combined installed capacity of 2,100MW.

The multipurpose dam serves the irrigation needs of both Egypt and Sudan, controls flooding, generates power, and helps in improving navigation across the Nile. It is 111m in height, 3,830m in length, and has a base width of 980m. Its single spillway has a water discharge capacity of 11,000 cubic metres a second.

W.A.C Bennett Dam, constructed on the Peace River in British Columbia, Canada, creates the Williston lake. The dam ranks as the seventh largest with a storage capacity of approximately 74 billion cubic metres and covers a surface area of 1,773km2.

The earth fill embankment dam is operated by B.C Hydro, and has a height of 183m andcrest length of 2,068m. The construction of the dam was commenced in 1961 and completed in 1967.

The power generating station at the dam, known as the G.M. Shrum Generating Station, has an installed capacity of 2,790MW and started generating electricity in 1968.

The world’s eighth biggest dam is the Krasnoyarsk Dam, which impounds the Yenisey River and creates the Krasnoyarskoye reservoir with a storage capacity of 73.3 billion cubic metres. The reservoir covers a surface area of 2,000km2 and has a shoreline of approximately 1,560km.

The power station of the dam features 12 units with a combined installed capacity of 6,000MW, used primarily to power aluminium plants owned by RUSAL Company. The water from the reservoir also serves the purpose of irrigation.

The Zeya Dam, built on the Zeya River in the Amur Oblast of Russia, north of the Chinese border, creates the Zeya reservoir with a storage capacity of 68.42 billion cubic metres, which is the ninth biggest dam based on reservoir capacity. The reservoir covers a surface area of 2,419km2.

The concrete gravity dam has an overall height of 112m, a crest length of 714.2m, and was constructed utilising 2.067 million cubic metres of concrete.

The Zeya Dam is owned by RusHydro and was constructed by Zeyagesstroy and Bureyagesstroy from 1964 to 1975. The dam’s power plant comprises of six generating units with a combined installed capacity of 1,290MW. The power plant features the world’s first adjustable-blade diagonal-flow turbines.

The Robert Bourassa Dam impounding the La Grande River in northern Quebec, Canada, creates the Robert-Bourassa Reservoir. It is the world’s tenth biggest dam and has a reservoir capacity of 61.7 billion cubic metres covering a surface area of 2,815km2.

The embankment dam is 162m high and 2,835m in length, and features a spillway which has a capacity to release17,600m3 of water per second.

The dam is owned by Hydro-Québec and was constructed from 1974 to 1981. The dam’s two power plants are fitted with 16 Francis turbines having a combined installed capacity of 5,616MW. Alstom is carrying out a major refurbishment and upgrade of the dam’s power stations.

Forecast spending for 2012 has been lowered as government officials confirm the UK will pull out of Afghanistan by 2014.Latin America’s waterways have a massive but largely untapped potential to power large parts of the continent.