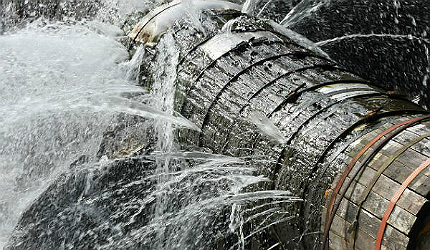 By the time you finish reading this article, the UK’s ageing network of water pipelines will have leaked an estimated ten million litres of water, enough to fill one million bathtubs. Despite the wettest April for more than 100 years, the hosepipe ban issued by seven UK water companies on 5 April 2012 remained in place for millions of frustrated householders.

The 25 UK water utility operators are struggling to meet the demands of a population which is set to exceed 78 million people by 2050. They blame the profligate habits of consumers, claiming that a hosepipe ban, though inconvenient, is easily preferable to the expense of replacing leaky pipes. Thames Water, Britain’s biggest supplier, estimated that the ban could save up to 150 million litres of water a day. To get the same saving by replacing leaky pipes, it said, would cost £1.2bn and take ten years.

Unconvinced, the general public accuses the water companies of negligence, short-termism and greed, pointing to the fact that they continue to make millions in profits (water bills have risen by an average of 5.7%), while at the same time allowing 3.3bn litres of water to go to waste each day as a result of their refusal to invest in deteriorating infrastructure.

"Commodity utility providers are undergoing a revolution from an asset-centric to an information-centric approach."

Despite the fact that some providers are losing up to 40% of their final product in leakage through pipes, Ofwat, the water regulator, recently announced that it will not put pressure on commodity providers to cut those leakages before 2015.

With total water demand in England and Wales projected to increase 35% by mid-century, IT companies such as Oracle Utilities have responded by developing predictive technologies which can help the water industry become smarter about how it captures and analyses data.

"Commodity utility providers, whether they deal in water, electricity or gas, are undergoing a revolution from an asset-centric to an information-centric approach," states Bastian Fischer, Oracle’s vice-president, EMEA Utilities Industry Strategy.

"Oracle’s product offerings address two aspects: network integrity and the operation and dynamic observation of the water network," says Fischer. "Water operators cannot replace infrastructure or adopt new technology overnight, so the use of information is much more important for them than it is for other industries."

One way to source and collate this data is through real-time tracking using smart meters installed at critical points in the water network grid.

"Real-time measurements from smart meters can detect anomalies in pressure, conductivity, opacity and salinity," Fischer explains. "By merging this smart information with static typographical data relating to piping, soil and surface conditions, such as traffic and buildings, predictive suggestions can be made about the probable causes of leaks."

Smart metering, already a fact of life in the US and many European countries where water resources are more scarce, is being trialled by Thames Water in Reading and London. All homes built in England Wales since 1990 are fitted with water meters and the UK Environmental Agency wants all domestic properties to feature the technology by 2030.

The meters themselves cost up to £250 to install and transfer readings every hour from water pipes outside the home, via a mobile phone transmitter to the internet or device, so that both the customer and the water utility provider can monitor usage.

Ahead in the cloud: advanced water pressure management

Advanced pressure management technology, which is provided as a service via the cloud, contains hardware which sits in the ground and software that is managed remotely. Together, they help reduce leakage, new bursts and energy by remotely monitoring and optimising the water pressure in water distribution networks. The i2O technology is further supported by a range of services, including consultancy, network monitoring, training and installation support.

"The UK Environmental Agency (EA) predicts that total water demand in England and Wales could increase 35% by mid-century."

The system works by measuring pressure at various points in a water district metering area (e.g. a zone), amassing real-time data relating to flow rate characteristics, continuously learning, monitoring and optimising the pressure to prevent or address issues such as pipe bursts or leaks which may affect network performance. Water pressure can be adjusted automatically via a keyboard from any internet connection.

"The i2O technology continuously optimises the pressure in the water distribution network," Adam Kingdon, CEO of i2O Water, explained. "It removes the peaks in pressure that occur, especially at night, and keeps the network at just the right level under all demand conditions.

"This leads to big reductions in both leakage and new bursts while maintaining, and in some cases, improving the minimum level of service."

i2O Water supplies its technology to 14 countries across six different continents, with average leakage savings running at more than 20% – which equates to roughly 44 million litres of water a day – and a reduction in new bursts of nearly 50%. These savings on leakage between treatment plants and consumers have been achieved without extracting further water from rivers, underground or even desalinating water, which negatively impacts on the environment.

Water conservation, education and the rise of CRM

Oracle incorporates customer relationship management (CRM) models into its product offerings in recognition of the fact that water preservation is as much about changing the consumer mindset as it is about preventing leakages.

"In the past, access to water was considered to be an elementary right – only recently has that changed," said Fischer. "Oracle provides software, tools and technologies to water operators so that they are able to educate customers about water-usage deviation, continuous flows and sudden pressure changes."

Working with the Ministry of Water and Electricity (MoWE) in Saudi Arabia, the company has pioneered a flexible, scalable electronic billing and customer management system.

"The Saudi water industry has recently undergone significant changes challenging customer service and billing in a region where water is scarce," Fischer explained. "The Oracle solution delivers immediate visibility into consumer water consumption for increased water conservation and lower costs. Oracle Customer Care and Billing is at the forefront in terms of the use of IT technology and customer engagement."

Two unusually dry winters have left reservoirs, aquifers and rivers in the UK below normal levels, while groundwater is in short supply. According to BBC News Magazine, climate change projections indicate that the temperature across southern England could rise by up to 4.6°C by 2050, leaving half of the river basins in England and Wales short of water during the summer months.

More radical solutions to future water shortages include the construction of new reservoirs and desalination plants, such as the £270m London facility opened in 2010 by Thames Water, but both options are costly to build and run.

Wastewater has been proven to be safe to drink after passing through a treatment plant but persuading people to consume the runoff from dirty dishes, lukewarm baths and toilet bowls represents more of a challenge, as does convincing them of the benefits of a cross-country pipeline channelling water from the north of the country to drought-affected areas of the south-east, an idea originally conceived in 1942 and recently resurrected by Mayor of London Boris Johnson.

In reality, a combination of predictive technology, water preservation and long-term investment in ageing infrastructure looks to be the most compelling solution to water shortages in the UK and worldwide – and the most likely way to make hosepipe bans a thing of the past.