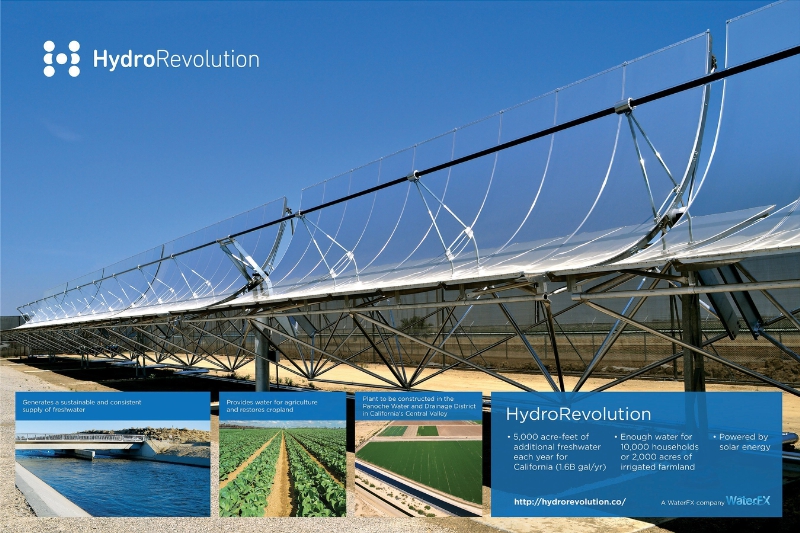 WaterFX subsidiary HydroRevolution in the US has announced plans to construct a desalination facility at Firebaugh in California using solar power.

To be set up in the in the Panoche Water and Drainage district, the commercial facility will be the first of its kind in the Central Valley region of the US state.

The facility will use solar thermal energy to purify local, salt impaired water and convert it into freshwater.

"Using a sustainable source of energy to recycle or desalinate water will become a mainstay in regions with water scarcity."

Once operational, it will be able to ensure sustainable water source to local water districts.

The proposed facility, to be developed on 35 acres of land, represents an expansion of the demonstration plant operated by WaterFX in the district in 2013.

It has a possibility of further expansion to be spread across a 70-acre site.

HydroRevolution chairman Aaron Mandell said: "The demonstration plant proved that we can reliably treat drainage water, and also showed that the treated water is not a waste product; it is a valuable new source of freshwater.

"Using a sustainable source of energy to recycle or desalinate water will become a mainstay in regions with water scarcity."

Equipped with WaterFX’s Aqua technology, the facility is expected to generate up to 5,000 acre-feet of water per year, which will be sufficient to meet the needs of 10,000 homes or 2,000 acres of cropland.

The generated freshwater generated will be supplied to Panoche and nearby water districts.

Panoche Water and Drainage District manager Dennis Falaschi said: "Given the trend of highly uncertain inputs from the Delta, we need to develop a reliable supply of water in the Central Valley.

"After seeing the results from the demonstration plant by WaterFX, we’re eager to get the HydroRevolutionSM plant online quickly and optimistic about seeing others replicate what we’re doing here.

"There is an enormous resource of subsurface water that can be utilised."

Image: The new commercial solar desalination plant will be constructed in the Panoche Water and Drainage District in California’s Central Valley. Photo: courtesy of WaterFX.