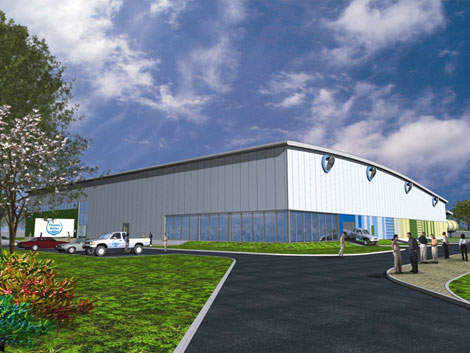 An artist's impression of the desalination plant. 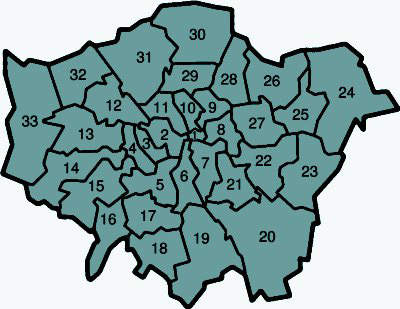 The desalination plant is located in the London Borough of Newham (no 27). 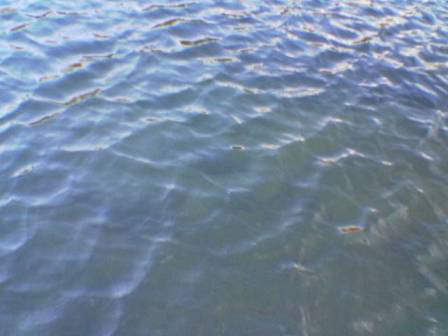 The desalination plant takes salt water from the Thames estuary and produces 140-150 million litres of clean water per day.

The increase of single-person households and London’s naturally low rainfall means that the demand for water is increasing with the average person using 160l per day. In response, Thames Water proposed the construction of the Thames Gateway Desalination plant in Beckton, east London, on the North Bank of the Thames. The plant is the UK’s first water desalination plant and one of the largest of its kind in the world.

The new plant cost £250m and can produce 140-150 million litres of water per day, which is enough for one million people in north-east London. The plant uses about twice as much energy as a conventional water treatment plant. It runs on biodiesel sourced in the UK, including recycled fat and oil from London restaurants and households.

The project construction was delayed due to opposition from Ken Livingstone, the then Mayor of London, in 2004. After a Public Inquiry in 2006, the mayor’s arguments were dismissed by the planning inspector. The decision was again challenged by Ken Livingstone in the High Court, however, in 2008 Boris Johnson, the new Mayor of London, withdrew the legal challenge from the court and granted planning permission.

On 18 July 2007 the desalination plant was given planning permission by Newham Council and approval from the Department for Environment Food and Rural Affairs (DEFRA), Department of Communities and Local Government (DCLG) and the Environment Agency.

These government bodies stipulated that the plant should operate only in times of drought, extended periods of low rainfall or to maintain supplies in case of an incident. Thames Water also agreed to formulate an operating agreement with the Environment Agency.

The construction of the plant at the site of the Beckton Sewerage Works began in June 2008. The plant started producing clean drinking water in March 2010 and is expected to run for 40% of the time during its 25-year operational life.

To transfer the desalinated water to the Woodford reservoir for distribution, 15km of pipeline was laid. The transferred water is fluxed with existing supply facilities.

The plant receives the brackish saltwater of the Thames Estuary, which is stored in a 175,000m³ reservoir. The water is then treated with a chemical conditioning process. After this process, the treated water undergoes rapid mixing, coagulation, flocculation and lamellar settling.

The filtration of the treated water is carried out through three lines of reverse osmosis, and is mineralised and disinfected before being supplied to the consumers.

Scott Wilson Consultancy carried out a detailed environmental assessment in 2002. The consultancy was also responsible for a habitat ecological survey, mitigation proposal development and multi-species survey. The feasibility studies were carried out by Cascade Consulting.

“The plant is expected to run for 40% of the time during its operational life.”

Water provider regulator OFWAT adopted the project as a necessary investment to maintain the water supply in London.

Quantity surveying was carried out by Franklin & Andrews and engineers from Mott MacDonald, who worked with design engineers from Thames Water to produce the detailed designs of the plant and conduct civil engineering.

A PLC / SCADA control system supply contract, worth nearly £1m, was awarded to Adsyst Automation in 2009.