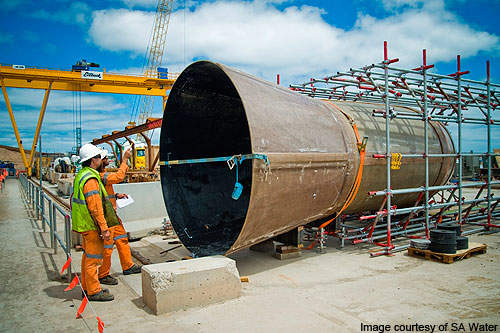 Trial assembly of the intake cross connection GRP prior to assembly in the tunnel. 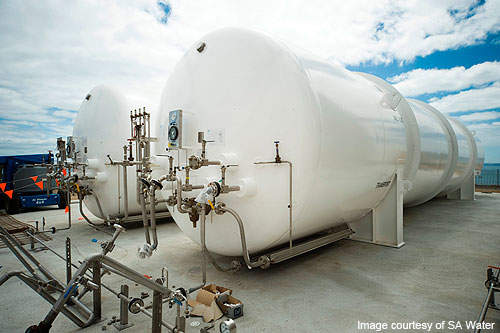 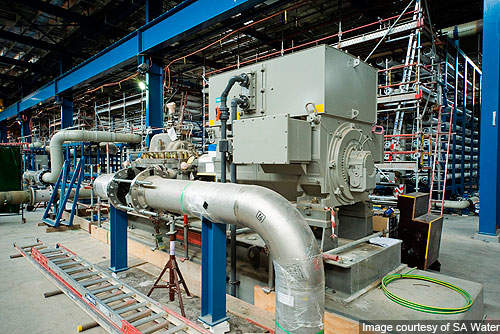 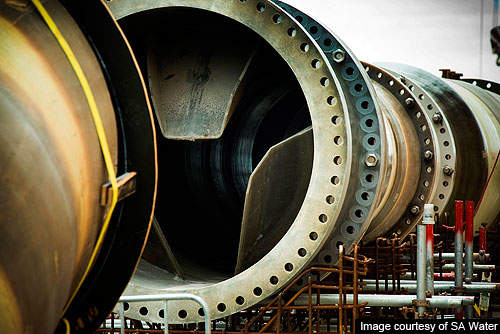 Salt water delivery pipe to the plant showing a static mixer within the pipe. 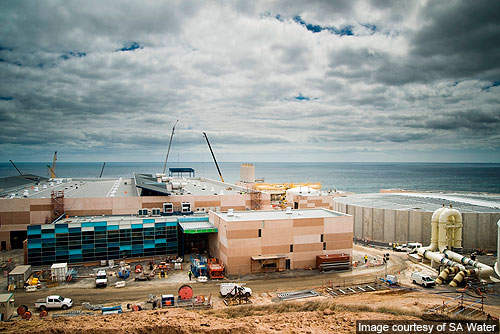 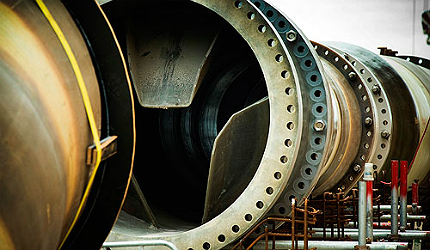 The A$1.83bn plant was constructed at Lonsdale, near Port Stanvac, approximately 30km south of the Adelaide central business district (CBD). The plant is also known as Port Stanvac Desalination plant.

The plant is built on a 32ha site. Sponsored by the South Australian Government and SA Water, it is able to cover around 50% of Adelaide’s annual water supply by delivering up to 100gl of water each year.

In August 2011, the Australian Government provided A$228m in funds towards the expansion of the plant to 100gl. The financing was part of the government’s commitment of A$328m towards the project.

The first 50gl plant started delivering desalinated drinking water in July 2011 and the first water entered the state’s network in October 2011. The entire plant with 100 gigalitres (gl) of capacity was completed in December 2012.

Operation and maintenance of the transfer pipeline was handed over to the owner in May 2012 following a six month testing phase. The plant became fully operational in January 2013.

"In August 2011, the Australian Government provided A$228m in funds towards the expansion of the plant to 100 gigalitres (gl)."

The desalination plant at Port Stanvac was announced by the Government of South Australia in December 2007. An environmental impact statement (EIS) was compiled in November 2008 and its assessment report (AR) was submitted in February 2009 by the Minister for Urban Development and Planning. A land deal for setting up the plant was signed in December 2009.

In April 2008, the state government chose SA Water to finance the project. Construction commenced in April 2009, while work on the desalination pipe project began in June 2009.

A pilot plant was built in late 2008 to study the desalination technology, process, water quality, and the environment. After studying and collecting data, the pilot plant was decommissioned in February 2011. It was built by Water Technology Australia.

Design of the South Australian plant

The desalination plant was designed by Woodhead. Its integrated industrial design allows it to meet the requirements of architectural work.

This design approach was taken to deliver a unified, cohesive, and sustainable design by integrating master-planning, architecture, landscape, and interior design. The plant was designed to have a low visual impact, from both close and long-range views.

A transfer pumping station, transfer pipeline, and a visitor centre were also built.

Designed as a public interface, the visitor centre has a glazed exhibition space, cantilevered roof forms, and rammed earth walls.

More than one million residents and commercial offices in Adelaide are dependent on the Murray River for potable water supply. In recent years, the Murray-Darling Basin has experienced low-flow water volumes due to climate change and severe drought in south-eastern Australia.

This situation prompted the South Australian Government to construct the desalination plant to augment water supply.

This plant is part of South Australia’s water security plan ‘Water for Good’, which was released in June 2009 and intends to secure the state’s water future to 2050 and beyond.

"Operation and maintenance of the transfer pipeline was handed over to the owner in May 2012 following a six month testing phase."

Desalinated water from the plant is stored in two storage tanks with a capacity of 25mgl each. Water from the two tanks located at Lonsdale flows into a pumping station, where it is transferred to Happy Valley through the transfer pipeline.

To make it suitable for drinking, compounds are added to the water, including lime to improve the taste of water, fluoride to meet Health SA requirements, chlorine to disinfect the water as it is delivered to the Happy Valley Water Filtration Plant, and carbon dioxide to reduce corrosiveness.

Desalinated water is mixed with the treated water of Happy Valley Water Treatment Plant and connected to the network system of SA Water.

Contractors involved with the desalination plant

Consisting of the plant, associated marine works, a pumping station, transfer pipeline, and a sub-station, the project was delivered through a design, build, operate, and maintain (DBOM) contract.

In February 2009, the South Australian Government had awarded the DBOM contract to AdelaideAqua, a consortium of McConnell Dowell Constructors, Abigroup Contractors, Acciona Agua and Trility (formerly United Utilities Australia). This contract will cover designing, building, operating, and maintaining of the plant for 20 years.

The 20km transfer pipeline was constructed by a joint venture of McConnell Dowell and Built Environs.

McConnell Dowell, Abigroup Contractors, and Acciona Agua formed a joint venture (JV) to design and construct the plant and associated marine works. Operation and maintenance were undertaken jointly by Acciona Agua and Trility.

In April 2009, the engineering design contract was awarded to SMEC. Technical studies and investigations were undertaken by Aurecon.

Wonthaggi desalination plant will be the largest in Australia.

The new plant is located at Taranto Road, north of Binningup, approximately 150km south of Perth.