Department of Sustainability and Environment, Victoria

3D Modelling of the Project 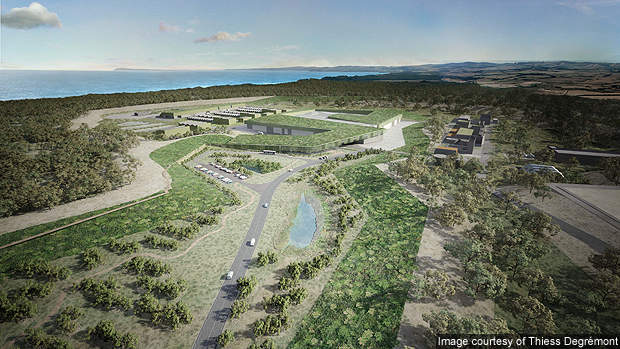 An artist's rendering of the main entry to Wonthaggi Desalination Plant. 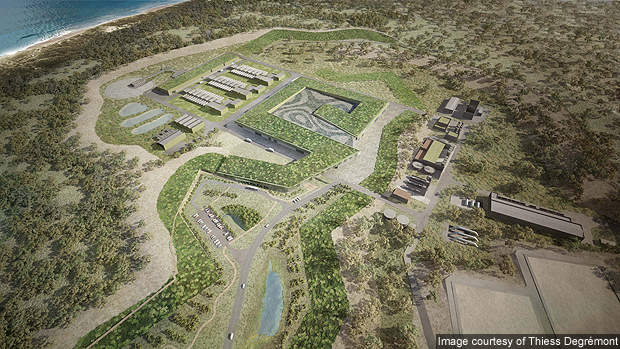 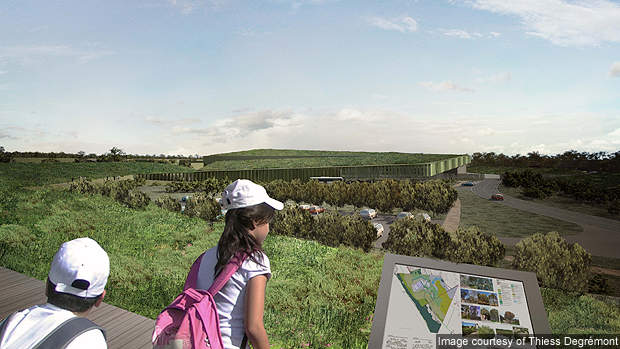 Viewing platform of the desalination plant as depicted by the artist.

The Wonthaggi plant construction was started in September 2009. 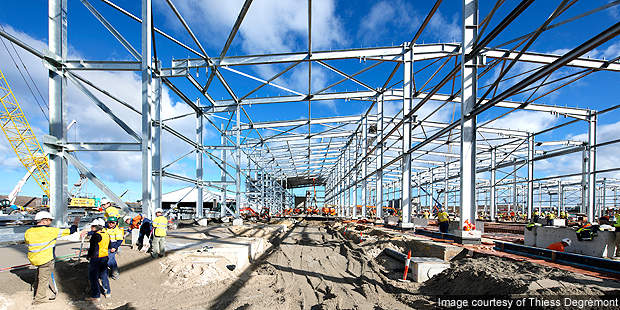 The desalination project is estimated to cost &#36;3.5bn. 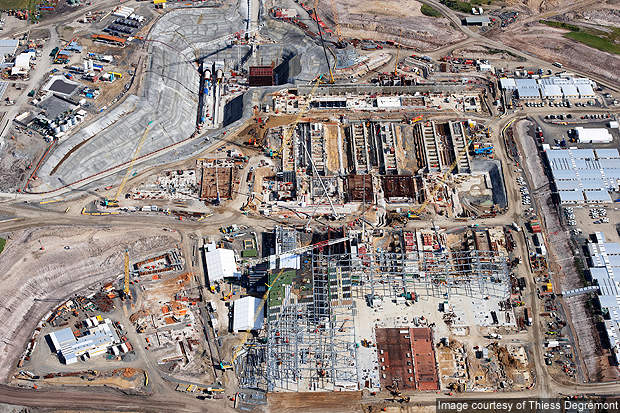 Wonthaggi plant is the largest desalination plant in Australia. 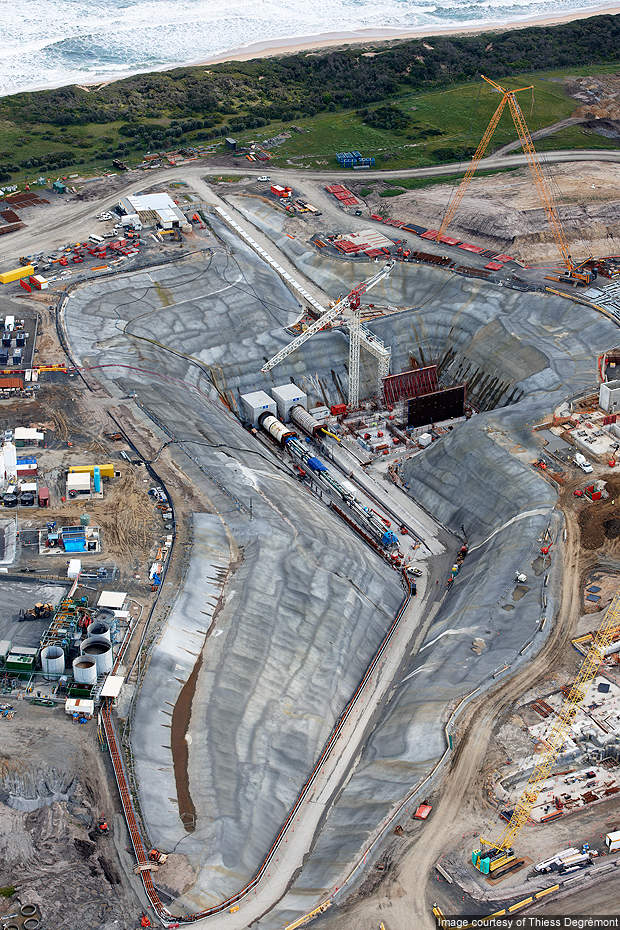 The treated water from Wonthaggi is supplied to Melbourne's water supply system through an underground pipeline. 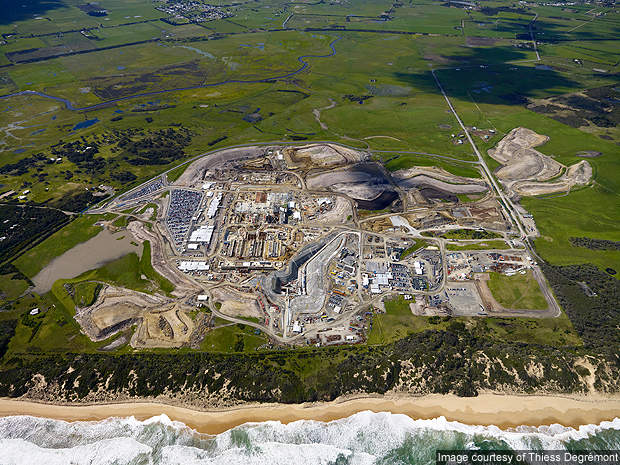 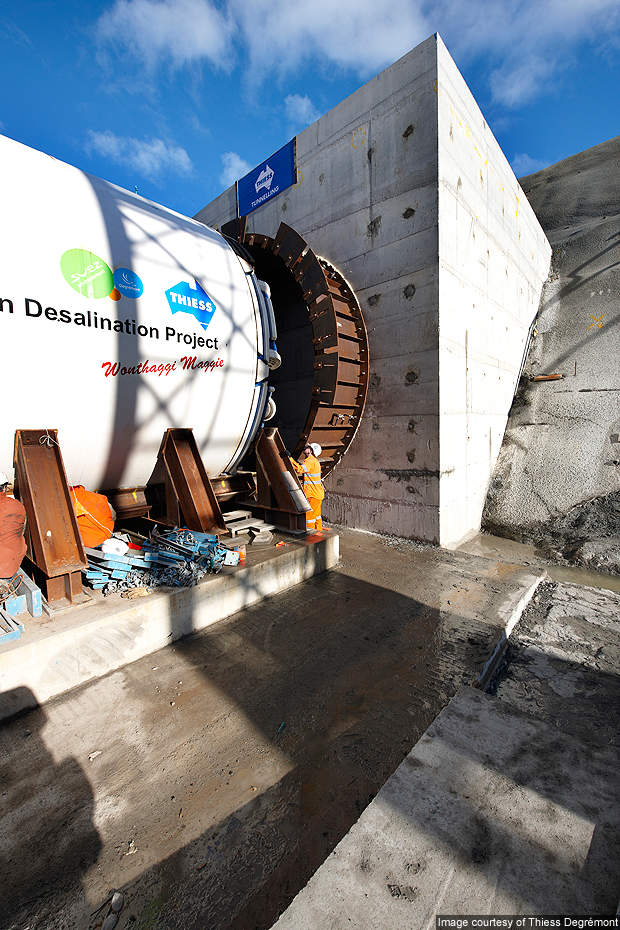 The plant uses 100% renewable energy for its operation. 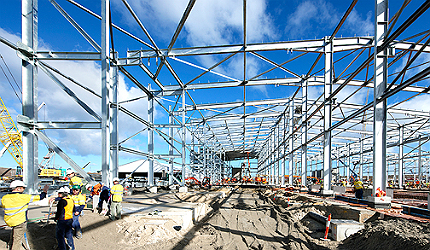 Wonthaggi desalination plant is the largest in Australia. The $3.5bn plant, also called the Victorian desalination project, has been constructed on the Bass Coast near the town of Wonthaggi, in the state of Victoria.

Construction was started in September 2009 after the acquisition of cleared farmland behind the coastal dunes near Wonthaggi. Apart from the plant, a buffer zone was built on the acquired land.

The plant was put into trial operations for one month as part of the Reliability Testing Finalisation (RTF). The tests established the quality of the water which was allowed to flow into the Cardinia Reservoir for consumption. The plant achieved full capacity after the completion of RTF tests in 2012.

Opposition to the plant – Your Water Your Say

"Australian Greens, the third largest political party in the country, and several community groups have opposed the plant."

Public rallies and protests were taken out against the project throughout 2007, 2008 and 2009. A petition signed by nearly 3,000 people opposing the project was submitted to the Victorian Parliament in 2009.

The government is being accused of privatising the water resources as the plant is being built under a public-private partnership (PPP). Protesters claim residents will have to pay nearly $900m a year for the desalination plant and the water produced from it.

Australian Greens, the third largest political party in the country, and several community groups have opposed the plant.

The government was legally pursued by a community group, Your Water Your Say. The group, however, lost the legal battle and was asked by the government to compensate for the legal costs.

The Victorian Government awarded the project contract to AquaSure consortium, which consists of Degrémont, Macquarie Capital and Thiess, in June 2009.

The consortium was responsible for financing, designing and building the plant. It is also responsible for operating and maintaining the plant for 30 years (including the construction period). In November 2009, a contract of $43m was awarded to Olex for supplying high-voltage alternating current power cabling.

"The plant achieved full capacity after it successfully passed the RTF tests in late 2012."

Thiess also awarded a contract of $7m to Ortech Industries for the manufacture and supply of 44,000m2 of its ‘Durra Panel’ acoustic ceiling system and 38,000m2 of roof systems. The company awarded another sub-contract of $6m to Ausform to build water retaining structures.

In October 2010, Thiess Degremont awarded a contract to Siemens Automation to supply process automation and switchgear equipment for the plant. Siemens supplied PCS7 equipment, which is used to manage the flow, vibration, temperature and pressure. Thiess Degrémont also awarded SRS Group the contract to supply SIEMENS motor control centres (MCCs) and a number of control and protection panels for four control sites at the project site.

Fytogreen was awarded a $4.3m contract by Thiess Degremont in September 2010 to install about 98,000 indigenous ground covers, shrubs and tussocks over a roof area covering more than 26,000 square metres.

DHL Global Forwarding, which is the logistics partner for the desalination project, delivered nearly 60,000t of material and equipment during the construction.

General Electric’s (GE) Power Conversion business unit was involved in the design and supply of a whole set of medium-voltage motors and low and medium-voltage variable frequency drives for the plant. The company also supplied associated filters and transformers for use in both the reverse osmosis plant and the associated pipeline network.

In the past ten years, Victoria has experienced several water crises, higher temperatures and record low rainfall. As a result there has been a significant reduction in the availability of water.

In order to improve Victoria’s water supply, the government announced the Our Water, Our Future plan in June 2007. The Wonthaggi seawater reverse osmosis desalination plant is intended as a long-term solution to secure Melbourne’s water supply.

"In order to improve Victoria’s water supply, the government announced the Our Water, Our Future plan in June 2007."

The Wonthaggi desalination plant project has four main components. In the first component, the plant was constructed with a capacity to generate 150-200 gigalitres a year.

The second component involves establishment of a link between the plant and offshore constructions located in the Bass Strait by building two 0.8km to two kilometre long tunnels. The first tunnel is used to supply seawater to the plant, and the second to move saline concentrate, discharged from the plant.

In the third component, water is transferred to Melbourne’s water supply system by laying an underground pipeline from Wonthaggi to Berwick. The fourth and final component facilitates the plant’s operations by supplying 90mW to 100mW of electricity.

Thiess Degrémont was responsible for both designing and constructing the Wonthaggi desalination plant. The plant works include the construction of a reverse osmosis desalination process plant, an 84km long water transfer pipeline, marine tunnels and structures and 87km of underground power-lines to supply the plant with energy.

The soil excavated for the plant was used to construct a series of new dunes. The 170m x 170m reverse osmosis building foundation works and piling works for the pre-treatment area were also carried out. In order to construct the seawater lift pump station, a 27m deep box-cut has been made to provide access to the tunnel boring machinery.

Pipelines have been laid for 84km near Berwick, to transfer desalinated water to Melbourne and regional water networks. The pipeline, which is capable of supplying up to 150 billion litres of drinking water each year, is made up of nearly 6,200 pipe sections, each having a diameter of 1.93m, a length of 13.5m and weighing 13t.

Work on the 1.5km long outlet tunnel that is used to discharge saline concentrate from the plant in the Bass Strait commenced in September 2010. Work on this outlet tunnel was finished in March 2011 with the help of a tunnel boring machine (TBM) named Rocking Ruby.

The 1.2km long intake tunnel was completed in December 2010. Boring was undertaken by the Wonthaggi Maggie TBM. To help protect marine environments, intake and outlet tunnels of the plant are being built 15m-20m beneath the sand dunes and seabed.

The twin tunnels were constructed using 10,700 concrete segments. Installation of drilling risers into the seabed, and the intake and outlet structures on the seabed, has been completed.

The completed plant operates on 100% renewable energy. One of the main features of the plant’s design is a living green roof, the largest of its kind in Australia. The roof, which is made up of biodegradable materials, is used to camouflage the plant. It provides thermal control, corrosion resistance, acoustic protection and reduces the need for maintenance.

Utmost care has been taken to keep the building’s footprint small; it is being developed in only 38ha of the 263ha site. The remaining area is used to develop an ecologically sustainable landscape. Provision has also been made to create paths for local cyclists, pedestrians and horse riders.

The indigenous vegetation on the plant site, which has been cleared to make way for construction, has been restored by the planting of more than three million plants and shrubs.

In order to integrate the plant with adjacent landforms, and minimise visual and noise impact, reconstruction of coastal dunes is being carried out.

Desalination treatment in the state of Victoria

The new plant is located at Taranto Road, north of Binningup, approximately 150km south of Perth.