Ministry of Public Works and Housing

Belgium, the Netherlands, Ireland, USA and the Flemish Region
Expand 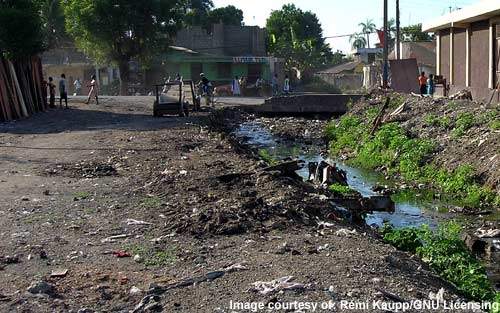 Blocked drainage channels, excreta and waste on the ground - the evidence of poor sanitation. Some 80% of all disease in developing countries arises as a direct result of this. 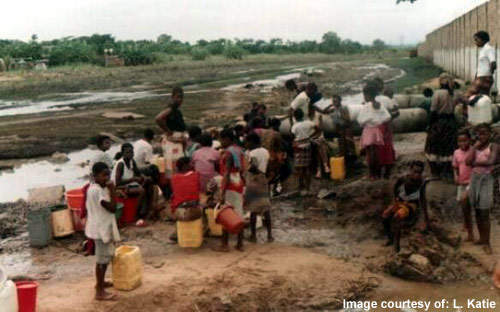 Children at a Mozambique watering point. The country's Millennium Development goal aims to halve the percentage of people without sustainable access to potable water by 2015. 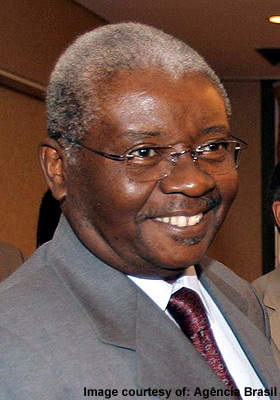 Armando Emílio Guebuza, President of Mozambique. He has been instrumental in driving water and sanitation issues up the political agenda. 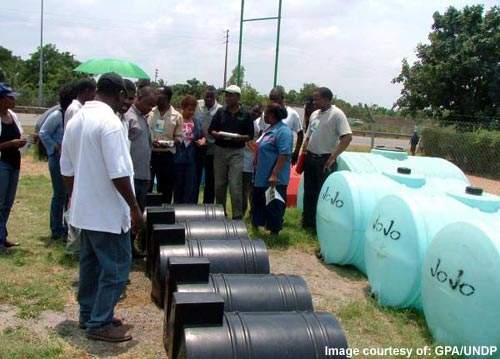 Field work on one of the wastewater management training schemes run by Train-Sea-Coast GPA - a UN inter-agency collaboration. 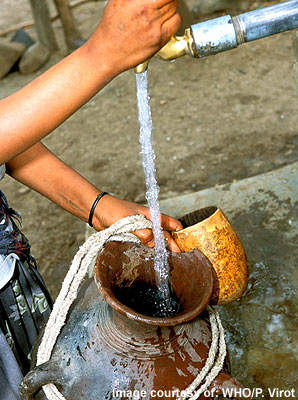 Water points are an essential lifeline for millions of Africans. By August 2006, a total of 124 of Mozambique's water points had been rehabilitated.

Map of Mozambique. In common with many countries in the region, regular access to good quality drinking water and sanitation has been poor and public health has suffered. 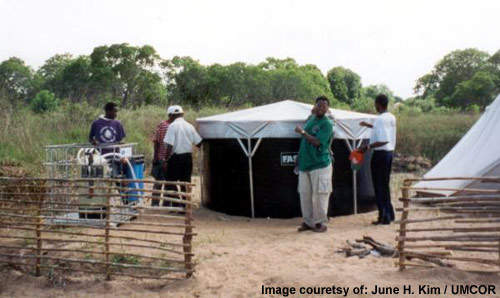 Water purification unit and storage tank. Small transportable systems such as this have proven invaluable in Mozambique. 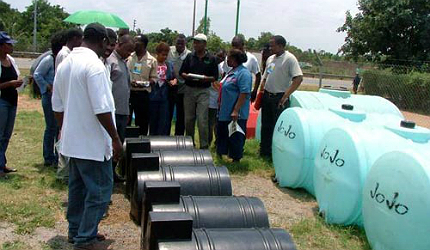 With the inauguration of the new water treatment plant at Mutua in May 2007, an important milestone was passed in Mozambique’s ambitious drive towards improving its provision of potable water and sanitation.

Doubling the supply of water to the cities of Beira and Dondo, the plant was opened by the country’s President Armando Emílio Guebuza the day after he formally launched the next stage of the project to deal with Beira’s sewage. Construction of the Beira treatment plant was carried out during a period of 30 months and was completed in June 2012.

This latest part of the scheme comprises of rehabilitating the existing sanitation network, together with the construction of a number of new system elements to extend and upgrade the sewers, wastewater treatment facilities and a drainage system.

The new water plant cost €5.6m, while the Beira sanitation system cost €62.65m, with the EU providing €52.95m, and the remaining €9.7m provided by the Mozambique Government.

"Recognising the importance of water and wastewater provision to the health of the nation, in 1995 the government of Mozambique developed a National Water Policy."

In 1975, Mozambique became an independent country after nearly 500 years as a Portuguese colony. It was also one of the poorest countries in the world, and a civil war that commenced from 1977 to 1992 did little to improve this.

In 1987, the government began a series of reforms intended to stabilise the economy, improve the country’s infrastructure and improve the population’s standard of living.

Access to drinking water and sanitation in Mozambique was historically a major problem, alike many of the sub-Saharan African nations. It has been estimated that in developing countries, around 80% of all disease arises as a direct result of inadequate sanitation, poor hygiene, and contaminated water.

According to the United Nations Environment Programme, each day around six thousand people die from diseases caused by poor sanitation, while another 300 million Africans have no access to clean water.

For Mozambique in 1992, around a fifth of the country’s households had access to potable water and the situation for wastewater provision was even worse. This was a serious public health issue in an area where cholera, dysentery and other water-borne diseases are endemic.

Recognising the importance of water and wastewater provision to the health of the nation, the Government of Mozambique developed a National Water Policy in 1995, following it three years later with the First National Water Development Programme. By 2003, the proportion of households with drinking water access had risen to a third.

To improve the provision of wastewater treatment, the National Water Directorate produced a strategy sanitation plan in 2004 for the municipalities of Beira, Dondo, Maputo, Matola, Nampula, Pemba, and Quelimane.

In December of the same year, Joaquim Chissano stepped down as president after 18 years in office. His elected successor Armando Emílio Guebuza pledged to continue the programme of economic and infrastructure development, which encouraged growing foreign investment. Despite the great advances that Mozambique has made, external assistance remains essential.

The EC is currently financing water and sanitation schemes through the European Development Funds (EDF) and Thematic Budget Lines (TBL).

In addition, the EU Water Initiative and the ACP-EU Water Facility programme allocates additional development aid funds for projects in African, Caribbean, and Pacific (ACP) countries, including a number of initiatives in Mozambique.

Water and wastewater provision for Beira and Dondo

Before the construction of the Mutua plant, the inhabitants of Beira and Dondo received water from the irrigation system at the Mafambisse sugar plantation.

This could provide 30,000m³/day and during the dry season, the system was prone to salt-water intrusion, which significantly reduced the quality of the potable supply. The new plant has now doubled the amount of drinking water available, pumping 60,000m³/day to the two cities.

The Beira sanitation project is specifically intended to help improve national health by rehabilitating the existing sanitation network and constructing new system elements within the city. The project included the construction of a new wastewater treatment plant comprising of a pre-treatment facility, anaerobic tanks, biological filters, decanters and drying beds.

It also included the repair of 11 pumping stations, four elevation stations, and six outlets to the sea. Renewal of sewers, the reconstruction of 6km of pressure pipes and cleaning of 164km of pipework was also part of the project.

Addressing one of the main goals set out in the National Water Policy, the project was funded as two separate components to cover the detailed design and the construction phase of the work. It forms a central part of a series of major improvements, targeting areas that currently have low water and sanitation coverage, have been hardest hit by HIV / AIDS or are particularly vulnerable to cholera outbreaks.

In addition to the ongoing programme in Beira and Dondo, work is also to be carried out in other parts of Sofala province, along with the cities of Quelimane and Mocuba in Zambezia province and the districts of Buzi, Nhamatanda, Nicoadala and Milange.

According to UNICEF a total of 124 water points had been rehabilitated by August 2006, providing water to around 115,000 people. A further 36 new water points were constructed, benefiting more than 37,000 people.

Education has been identified as a key element in promoting hygiene and improving public health, an element of the UNICEF / EU project supporting both classroom awareness programmes and the creation of ‘sanitation clubs’ in schools. Train-Sea-Coast GPA also runs a separate training programme for wastewater management in Mozambique.

The project is sponsored by the Government of Mozambique, being co-ordinated by the National Water Directorate. Funding has been made available from the EC from the 7th and 9th rounds of the European Development Fund and the ACP-EU Water Facility, in collaboration with UNICEF.

A consortium comprising of CMC and Conduril carried out the construction work for the Beira Treatment Plant, while Louis Berger and Royal Haskoning served as consultants.

Euromec was subcontracted by CMC to supply equipment, and carry out commissioning, testing and start-up of the facility.

Train-Sea-Coast GPA is an inter-agency collaboration of UNESCO-IHE Institute for Water Education, UN-DOALOS and United Nations Development Programme (UNDP), with funding from the Governments of Belgium, the Netherlands, Ireland, the US, and the Flemish region.

Ethiopia embarked upon the construction of the Grand Renaissance Dam in April 2011. The engineering, procurement and construction (EPC) contract, worth ETB80bn ($4.7bn), was awarded to Salini Costruttori.

Contracts were awarded in 2001-02 for the next phase of Libya’s Great Man-Made River project, an enormous, long-term undertaking to supply the country’s needs by drawing water from aquifers beneath the Sahara and conveying it along a network of huge underground pipes.

Aswan High Dam is a rock-fill dam located at the northern border between Egypt and Sudan. The dam is fed by the River Nile’s waters, and the reservoir created by the dam forms Lake Nasser.

With one of the most ambitious and complex project financings on the continent – at about $1bn, the mine required a full environmental impact study approved by the Zambian Government, with water resource protection forming a major element in the scheme.

Now that the Earth’s population has reached seven billion how will future generations cope with an escalating water crisis? Rowan Watt-Pringle takes a look at a variety of innovative and futuristic concepts to provide clean water, ranging from the practical to the outlandish.