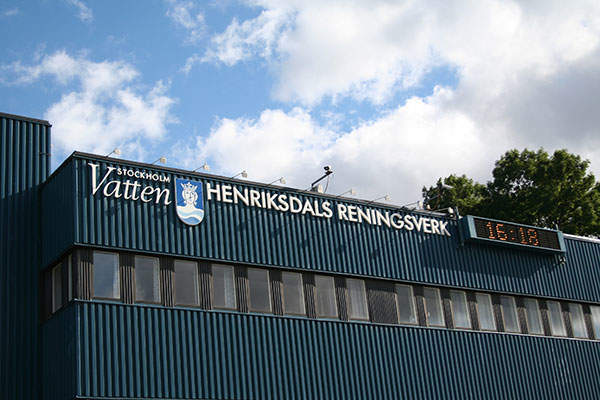 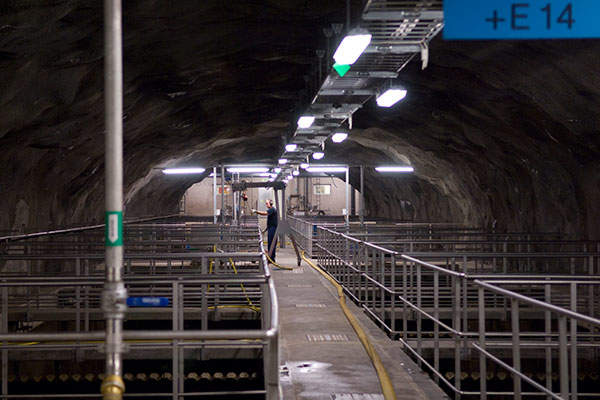 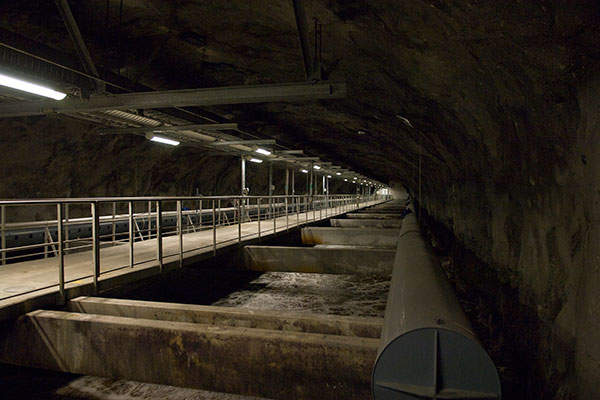 Approximately 90% of the facilities at the site are located underground. Image courtesy of Micke Sandström. 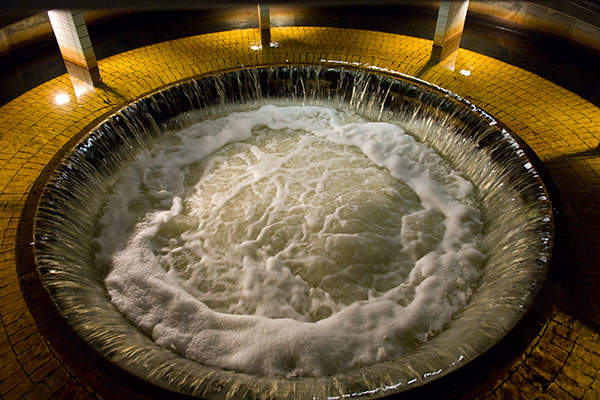 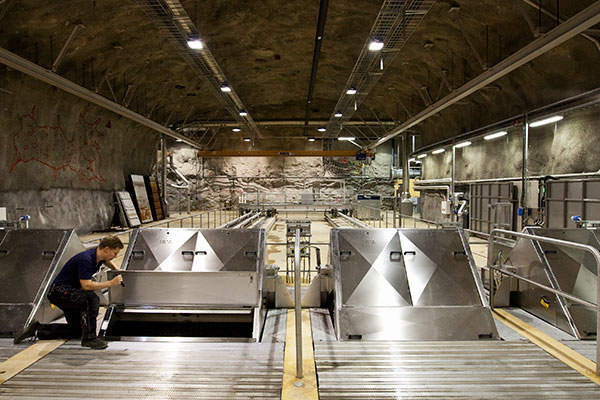 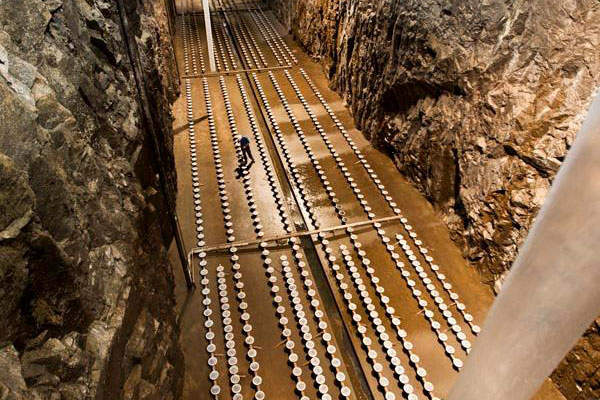 The aeration tanks at Henriksdal WWTP. 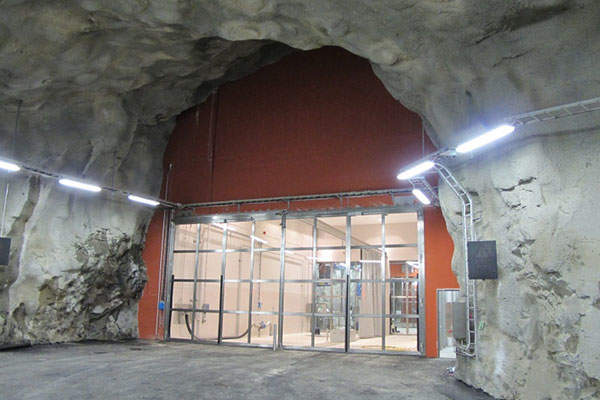 The fire gates at the Henriksdal WWTP were installed by Mercor in 2010. Image courtesy of Mercor. 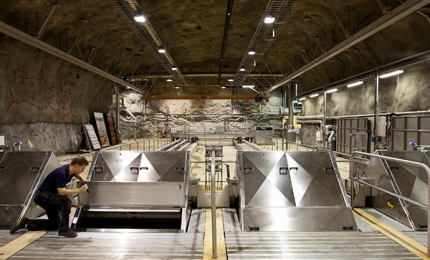 Henriksdal wastewater treatment plant (WWTP) is located on the boundary between Stockholm and Nacka, approximately 2km from Slussen, Sweden. It currently serves approximately one million people in Stockholm and Huddinge, including Haninge, Nacka and Tyresö municipalities.

Operated by Stockholm Vatten (the Stockholm Water Company), the facility is one of the world’s biggest underground WWTP and covers a total area of 300,000m³ with 18km of associated tunnels and a wastewater treatment capacity of roughly 250,000m³ a day. The sludge produced from the plant is treated at the neighbouring facility in Sickla.

Stockholm Vatten has proposed a major expansion and renovation for the WWTP in order to meet the city’s growing population and enable the city to close down the Bromma WWTP, which is causing an obstruction to create more homes in western Stockholm. The project will enable the city to meet the effluent requirements set under the Baltic Sea Action Plan (BSAP) and EU water directive.

Integrating GE’s proprietary LEAPmbr technology, the WWTP will be the world’s biggest facility implementing the membrane bioreactor (MBR) technology when the project is realised in 2018. Construction works on the SKr5.94bn ($689.5m) are scheduled to start in 2016.

Henriksdal WWTP was opened in 1941 with an initial treatment capacity of 150,000m³ a day, which increased to 300,000m³ a day in 1953. Chemical and biological treatment facilities were later incorporated into the plant’s system.

"The WWTP will be the world’s biggest facility implementing the membrane bioreactor (MBR) technology when the project is realised in 2018."

Executed from April 1992 to April 1997, a major expansion enabled the plant to reduce nitrogen emissions by approximately 50% and improve phosphorus treatment.

Another major reconstruction project was carried out from 2007 to 2011, which involved the construction of a new hall for rough purification and new receiving station for grease and organic waste. The project involved the blasting and excavation of 80,000m³ of rock, enabling the odour producing facilities to be reconstructed and placed underground. It facilitated the development of 3,000 new homes around Henriksdalsberget.

The plant treats wastewater using mechanical, chemical, biological and sand filtration processes following which the treated water is emptied into the Baltic Sea. The biogas produced from the plant is used as fuel in the plant’s heat production system for the production of electricity and for producing biomethane for fuelling vehicles, while the produced sludge is used as a soil conditioner.

The Hutto South Wastewater Treatment plant is being built to meet the future wastewater treatment demands of Hutto, Texas, US.

Furthermore, the plant is equipped with 12 pumps to lift the water from the biological stage to 60 sand filters, seven digesters with a combined volume of 39,000m³, a heat exchanger digester sludge, a 5,000m³ gas holder, five excess sludge centrifuges with a capacity of 50m³ a hour, two sludge tanks with a combined volume of 10,000m³, four centrifuges with a capacity of 30m³/h each for dewatering of sludge, two silos of 800m³ each for containing dewater sludge, four gas engines, three boilers and associated facilities.

Approximately 90% of the facilities at the site are located underground. The surface facilities include control centre building, mechanical treatment facilities, sludge tanks and upper parts of the sludge thickeners, digesters, gas holder, and gas collection and gas storage facilities. The plant’s old ventilation chimney measuring 80m-high and 7m in diameter is currently being reinforced with concrete.

Details of the Henriksdal WWTP expansion and renovation project

A pilot project to test the MBR technology, taking into account a load equal to Stockholm’s projected population in 2040, was concluded in 2014. GE’s LEAPmbr technology which integrates its ZeeWeed 500 membrane is an advanced ultrafiltration technology that separates solids, bacteria and viruses from water or wastewater.

The pilot test was performed at IVL’s (Swedish Environmental Research Institute) Hammarby Sjöstadsverk research facility. The positive results from the test gave further impetus to the current project. The expansion and renovation will enable the WWTP to treat 864 million litres of wastewater a day.

In addition to installing the new membrane distillation units at the Henriksdal site, the project will involve the construction of a 15km underground tunnel, bored from 30m to 90m below ground level, to divert the wastewater from Bromma to Henriksdal. A new pre-treatment facility comprised a new pump station, new coarse screening and primary sedimentation basins will also be built at Sickla.

Contractors involved with the Swedish WWTP

The planning and design works for the reconstruction of the WWTP were performed from 2007 to 2011 by Sweco. In 2010, Mercor installed fire doors and gates at the site.

The contract to deliver the electrical solutions including telecommunications and automation solutions for the current project has been awarded to ÅF Group.