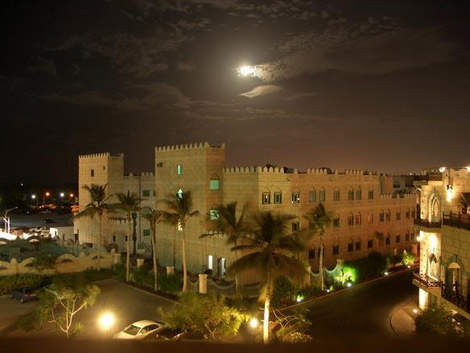 Muscat is the capital of the Sultanate of Oman. With an ever-growing population and becoming increasingly popular as a tourist venue, the need for a wastewater management system was urgent. 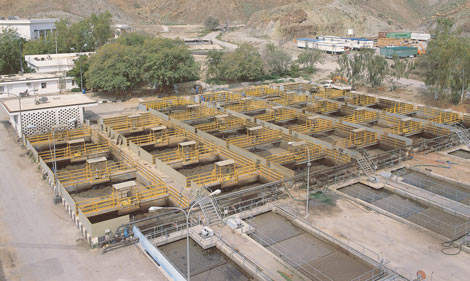 Work in progress to upgrade and rehabilitate the Darsait WWTP – part of phase one of the Muscat wastewater project. 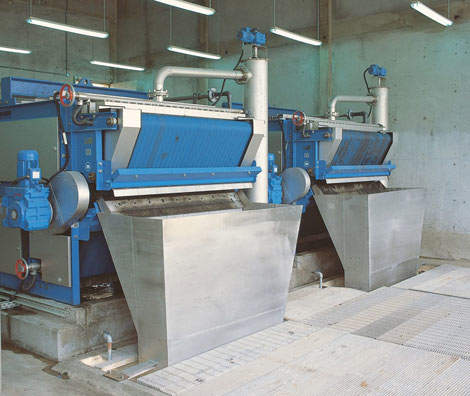 Some of the new equipment at the Darsait WWTP. The upgrade took just under 18 months to complete and involved 108 engineers, technicians and other staff.

Satellite image of a dust storm blowing from Oman out over the Arabian Sea. Water is a scarce resource and of the country's total area of 212,460km², only around 750km² is irrigated; arable land and permanent crops account for only 0.26% of the overall land usage. 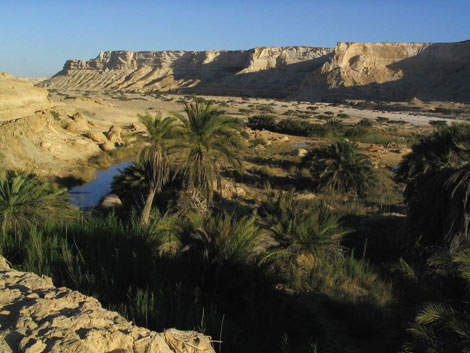 An oasis in Oman's desert. The scheme will supply treated water for irrigation, reducing pressure on natural sources in the water-scarce country. 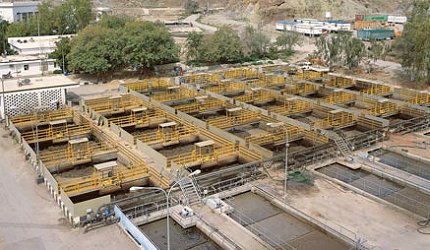 Muscat wastewater project, which includes the construction of what is expected to be the largest membrane bioreactor (MBR) plant in the world, is an ambitious programme that will ultimately serve 90% of the city’s inhabitants by 2017.

The scheme has two main elements – the provision of the 53,000m³/day treatment works at Al-Ansab in the Bausher region, and the extension and further development of facilities in the area of Al Seeb – which will be delivered in three phases. Establishing an integrated approach to wastewater management for the area, the project is intended to meet the needs of the growing population to the year 2025.

In addition to building the new WWTP, the work involves extending the capacity of the Darsait WWTP by 7,500m³/day, as well as constructing a 25km trunk line and a drainage basin near Muscat.

It also calls for the provision of vacuum sewage collection systems and the design of an associated network to cover an area of more than 500km².

"About 330km of wastewater pipeline and 70km of irrigation pipeline were laid during the phase which will serve about 18,000 homes."

Muscat, the capital of the Sultanate of Oman, is the seat of the country’s government, home to most of the private sector companies and is an increasingly popular tourist venue.

With an ever-increasing population – around 630,000 according to the 2003 census and projected to exceed one million by 2025 – the government set up the Oman Wastewater Services Company (OWSC) to address the urgent need for a wastewater management system.

A state company, established in December 2002 to work on a commercial basis before being eventually privatised in 2010, OWSC drew up a master plan for Muscat. This aims to serve 80% of the population in the six wilayats (districts) of Greater Muscat, Muttrah, Bausher, Seeb, Al Amerat and Quriyat by the end of 2014, and a further ten percent three years later.

The current scheme represents implementation of this strategy. It will ultimately cover an area of 3,670km², provide sewage services to 46,000 households and supply treated water for irrigation.

Given the scope and scale of the work involved – it covers all of the Bausher area and calls for a new collection network running from Hamryah to Azaibah in addition to the major new treatment plant – construction has been awarded as two separate contracts. Both of these are being implemented in a series of phases, spread throughout the duration of the overall scheme. The design stage began in April 2003 and the last elements are scheduled for completion during the final phase of the project.

"The A’Seeb project is part of the Muscat wastewater project, which was undertaken to meet the needs of the increasing population."

The new facility itself is being built adjacent to Al-Ansab’s existing WWTP. With an initial design capacity of 53,000m³/day, with scope to expand this to 80,000m³/day, once commissioned the plant will be the largest of its kind in the world – a series of submerged units housing a total of 124,000 flat-sheet membrane cartridges.

The MBR system selected has been developed to permit a high level of treatment and good energy efficiency, while demanding a very small footprint. The units are installed within the activated sludge tanks – the aeration required for treatment generating an upward cross-flow over the membranes and keeping their surfaces clean.

Since this design effectively acts as a high-concentration treatment, no settling or sludge thickening tanks are required, allowing the whole system to be simple and compact – the flow typically only needing to be screened and de-gritted prior to entering the MBR.

The sheets are made from chlorinated polyethylene, ultrasonic-welded on both surfaces and with a nominal pore size of 0.4 microns, though in use, the biofilm layer, which forms on their surface, reduces the effective pore size to less than 0.01 within the ultra filtration range.

In addition to carrying out onsite treatment with the installed MBR technology, the works will also act as the network’s operational centre, making extensive use of SCADA and distributed control systems to monitor the remote stations and direct operations. To accommodate this, the construction programme involves the provision of offices, staff accommodation and buildings to house equipment.

The associated sewer contract will provide the region with a network around 300km in length, with some 18,000 connections. It also includes pumping stations at Azaibah and Al-Qurum, lift stations, rising mains to supply the new plant, and an extensive irrigation network to allow reuse of the treated effluent, along with the installation of all electrical, control and automation systems.

The construction of a wastewater collection network and treatment plant has been designed for a sewage process capacity of 80,000m3/d, which is the region’s projected demand by 2030. The plant will treat the collected sewage water for safe disposal or further utilisation.

The construction of the project began in 2006 and is expected to be completed by 2013. The project is estimated to cost OMR410m ($1bn). It is being supervised by Parsons and implemented under six different contracts, each with different contractors. As of October 2011, five million safe man-hours were completed for contracts one and two.

A five kilometre sea outfall line from the sewage treatment plant will be designed with odour control equipment to dispose of additional treated water. The effluent will be mainly used for irrigation purposes through a 43km distribution network being constructed in Al Maabelah and Al Khoudh areas.

The wastewater at the plant will be treated using an SBR system, which is an activated sludge process where wastewater is treated in a single tank, including aeration and sludge settlement. The SBR reactors in the tank treat the sewage water by bleaching it with oxygen to reduce the biochemical oxygen demand (BOD) and chemical oxygen demand (COD).

The water treated using the SBR technology is further processed by an ultra-filtration membrane system. The UF membrane will make the water reusable for irrigation of sports fields and parks. The sludge settled at the bottom of the tanks is further used to produce fertilisers.

Phase one of the Muscat wastewater project

The first phase of the project was completed in February 2011 by Haya Water. It comprised of the Al Ansab wastewater treatment plant and the Al Ghubrah and Al Athaiba projects.

About 330km of wastewater pipeline and 70km of irrigation pipeline were laid during the phase which will serve about 18,000 homes within the area.

Oman Wastewater Services is responsible for overseeing the project, with Veolia as the operations / performance management contractor. The network design was done by Mott MacDonald. The design and supervision contractors for the Bausher collection network, Al-Ansab WWTP and Darsait WWTP upgrade were Khatib & Alami and Metcalf & Eddy. This role was played by Energoprojekt Entel for the rehabilitation work at the Al Khod, Al-Ansab, Shattie Al-Qurum and Ma’abailah WWTPs.

Korean Hyundai Rotem Company is responsible for the A’Seeb project execution, while Hyundai Rotem, in collaboration with Hyundai Engineering, is in charge of the plant design, construction, operation and maintenance, equipment supply and installation of the sea outfall pipeline. Parsons International and Company is the design and supervision consultant for the project.

In October 2008, Hyundai Rotem awarded a contract worth OMR16.5m ($43m) to Al Hassan Engineering Company SAOG (AHEC) for the architectural and civil works of the project. ITT Corporation is providing secondary wastewater treatment solutions for the A’Seeb sewage treatment plant based on the SBR technology.

SINOHYDRO Corporation was responsible for laying the pipelines for phase one of the project under a $150m contract.