The new tunnel will be located downstream of the Port Mann Bridge stretching from Surrey in the south to Maquabeak Park in Coquitlam on the north side of the Fraser River. Image courtesy of TimBray. 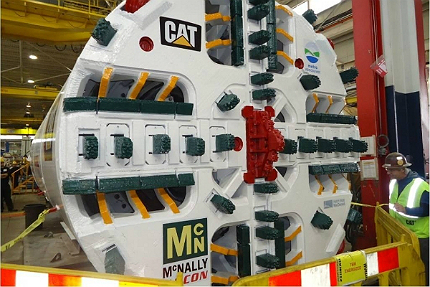 The Port Mann Water Supply Tunnel is being constructed by Metro Vancouver, under the Fraser River, the largest river in British Columbia, Canada. The estimated investment for the new water supply tunnel is C$240m ($231m).

The new tunnel will ensure continuous delivery of high-quality drinking water to growing communities south of the river and will more than double the capacity of the existing main.

The tunnel will be earthquake-resistant and located just downstream of the new Port Mann Bridge and upgraded Trans-Canada Highway.

Construction of the project began in June 2011 and is anticipated to be completed in the fourth quarter of 2016. The works are being carried out by the joint venture of McNally and AECON, with Hatch Mott MacDonald as the construction manager.

The new water supply tunnel will replace a 40-year-old main that was damaged in 1997 during the freshet on the Fraser River and temporarily repaired. The new tunnel is designed for a 100-year lifespan.

"The new tunnel will ensure continuous delivery of high-quality drinking water to growing communities south of the river."

Two underground valve chambers to regulate the flow of water through the new water main will also be constructed. The two valve chambers will be located near each shaft.

"The tunnel will be earthquake-resistant and will be located just downstream of the new Port Mann Bridge."

Shafts were constructed using ground replacement method instead of jet grouting in order to allow the tunnel boring machine (TBM).

The break-out and break-in zones at the two shaft sites feature rectangular block of panels and are being constructed using hydromill technology. The zones are being backfilled with concrete.

The material excavated by the TBM was transported to the surface in Surrey, where it was hauled off site. The tunnel was excavated at pressures of up to six bar using the new EPB machine.

The tunnel was designed by the Fraser River Tunnel Group, comprising of Ausenco Sandwell, Jacobs Associates and Golder Associates. Lindsey Quality Solutions is rendering management advisory and support services for the project.

Bencor was responsible for installing 30 slurry wall panels to a depth of 68.8m (225ft) for the south shaft. A BC40/MC128 Hydro mill for the project was provided by Bauer.

The segments for the fibre-reinforced precast segmental liner are being manufactured by Armtec. Ballard Diving & Hyperbaric Services is providing divers to carry out certain works inside the shafts.