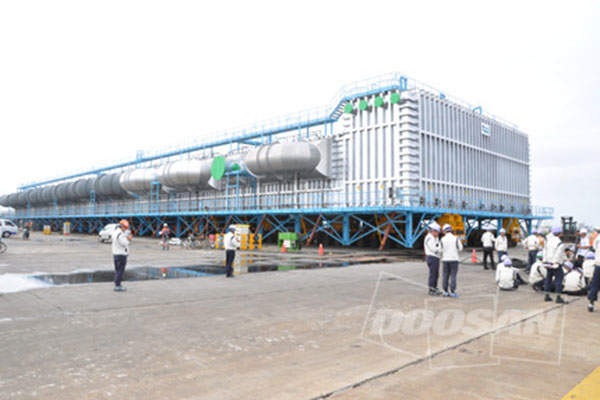 The MSF units at Ras Al Khair have a capacity to produce 160 million imperial gallons per day (MIGD). 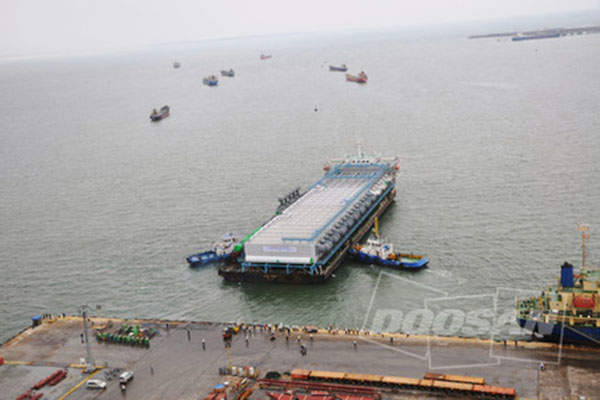 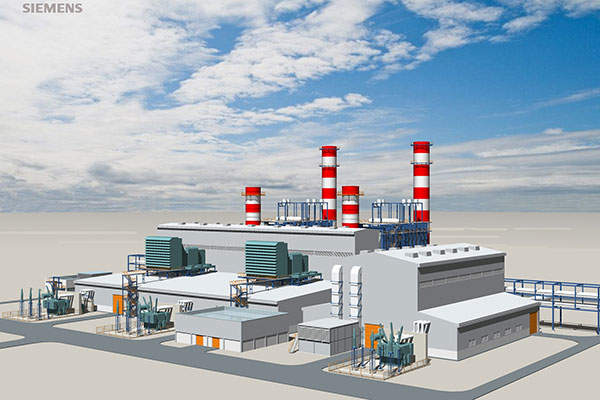 A rendition of the combined cycle power plant that will provide the energy required to heat the tubes within the distiller unit's brine heaters of the MSF plant. Siemens press picture.

Construction of the desalination plant started in early 2011 and commissioning was held in April 2014. It is the biggest desalination plant of its kind in the world, capable of serving approximately 3.5 billion people in the city of Riyadh.

The plant has a capacity to produce 228 million imperial gallons per day (MIGD) / 728 million litres per day. The project construction cost was SAR27bn (approximately $7.2bn).

The main contractor for plant construction was Doosan and its consortium partner Saudi Archirodon, with Poyry acting as the consultant for the project. The engineering, procurement and construction (EPC) contract involved production and installation of equipment and facilities, as well as testing and commissioning.

Maaden’s alumina refinery will use up to 1,350MW of electricity and 25,000m³ per day of water from the project.

“The plant is located in the Ras Al Khair Industrial City about 75km north-west of Jubail.”

The desalination plant consists of eight MSF units and 17 RO units. The MSF units have a capacity to produce 160 MIGD, while the RO units produce 68 MIGD. Three of the MSF units were built at Doosan Heavy Industries Vietnam, while the other five were produced at the Doosan Korea facility.

The Ras Al Khair desalination plant project involved construction of an RO building, switchgear buildings, a wastewater treatment plant, a chemical dosing building, as well as installation of a dissolve air floatation unit and two dual media filters. Ground improvement and backfill works were also carried out across the site of the RO and MSF plants.

The offshore elements for the project included the laying of GRP (glass reinforced pipes) discharge pipes measuring three kilometres with end diffusers, construction of an intake channel comprising a dredged channel and two rock breakwaters measuring 1.4km, a seawater intake pump house and a discharge chamber to the pipes.

The MSF process for desalination involves the heating of seawater to produce steam and then condensing the steam to produce desalinated water.

“The plant has a capacity to produce 228 million imperial gallons per day (MIGD) / 728 million litres per day.”

The process begins with heating the seawater at a high temperature in the brine heater. The heated seawater is conveyed to an evaporator where the pressure is lower, allowing the water to boil rapidly where it flashes into steam. The remaining water then undergoes similar additional stages where the pressure at each stage is lower than the earlier stage.

The vapour generated by the flashing is converted into fresh water by condensing the vapours from the heat exchanger tubings that run through each stage.

Waste heat from the combined cycle power plant will be used to heat the tubes within the distiller unit’s brine heaters.

The RO process involves the use of pressure to force the seawater through a semi-permeable membrane for the removal of sodium and chloride. The process initially involves pre-treatment by using any of the methods such as coagulation, flocculation, sedimentation and filtration, or even microfiltration (MF) and ultra filtration (UF).

The second stage involves the supply of pressure using pumps to force the water through the membrane. The membrane assembly consists of a pressure vessel and a membrane.

The final stage or the post-treatment stage implements energy recovery devices or energy recovery turbochargers. It involves stabilising the water by removing gases such as hydrogen sulphide, measuring the acidity and alkalinity of the water and preparing it for distribution.

Civil and building construction works for the desalination plant project were carried out by Assad Said under a contract worth SAR213m ($57m). The erection of the steel structure for the pipe bridges at the project site was carried out by Hamte Heavy Industries.

The world’s second largest seawater desalination plant is being built in Sorek, about 15km south of Tel Aviv, Israel.