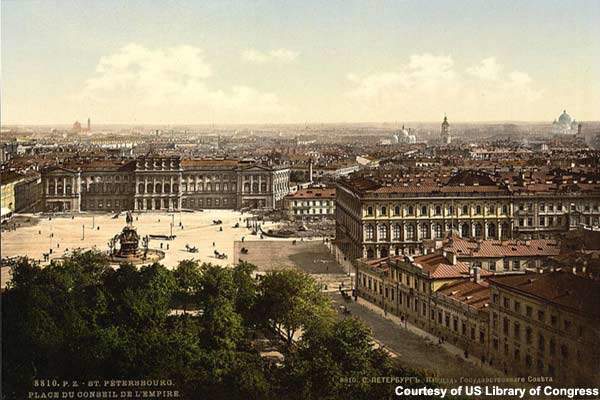 St Isaac's Square and the St Petersburg skyline in the 1890s.

The St Petersburg dam complex, from the north shore of the Gulf of Finland. 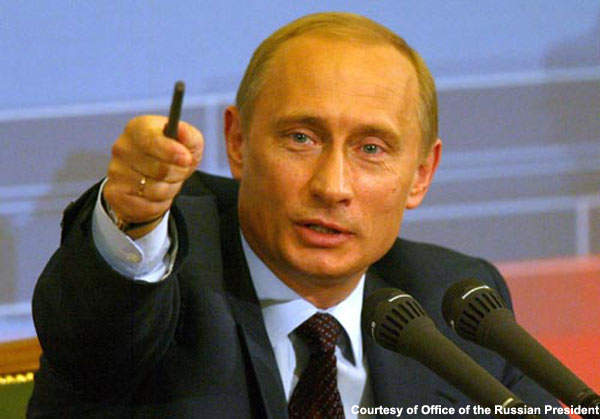 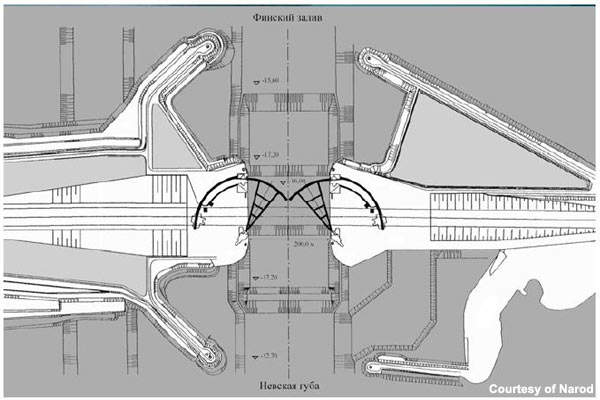 Blueprint of the dam showing the huge curved flood gates of the main C1 navigation channel. 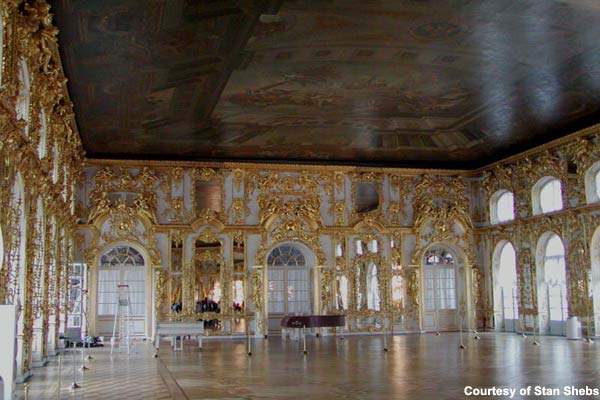 The ballroom of the Catherine Place; St Petersburg is home to many of Russia's priceless cultural treasures. 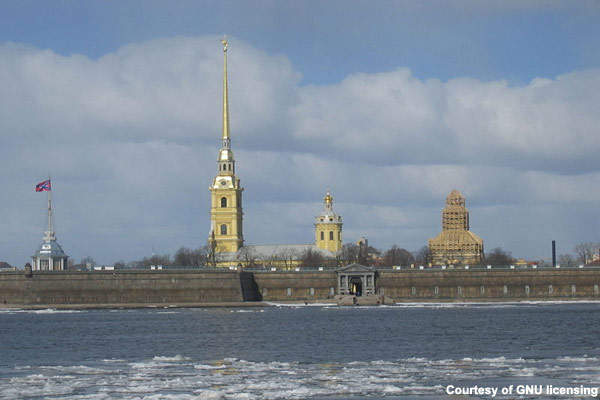 The golden spire of the Peter and Paul Cathedral seen from the Neva river; a significant portion of the city lies less than four metres above sea level. 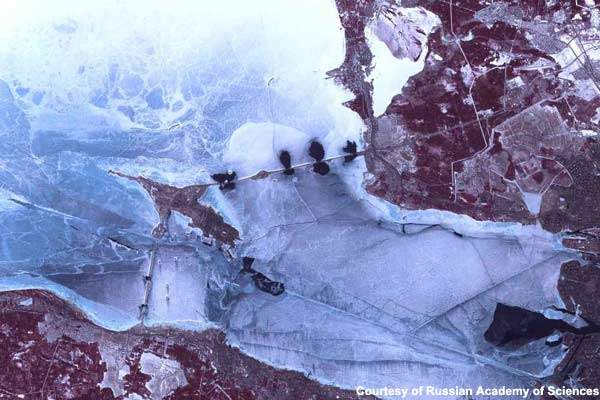 Satellite view of the facility during construction. The Gulf of Finland is largely ice-bound, while Kotlin island and the barrier can be seen in the centre of the Neva Bay. 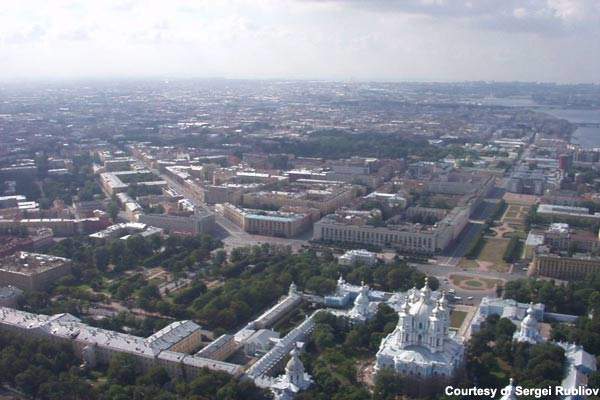 Aerial photo of St Petersburg today – Europe's fourth-largest city and the largest city in the world north of Moscow. 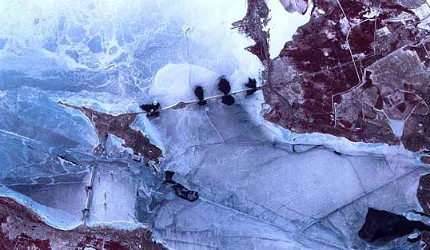 The long awaited St Petersburg Flood-Prevention Facility was commissioned in August 2011. It comprises of 11 dams stretching 25.4km. The complex can protect the city of St Petersburg from flooding up to 5.4m of water. It was built at a cost of $3.85bn.

The South-West Wastewater Treatment Plant (UZOS) was designated as the single most important water protection project in the Baltic Sea region.

Home to 4.6 million people and some of Russia’s most prized cultural treasures, throughout St Petersburg’s 300 years of history the city has been flooded on an almost annual basis – and in some years, more than once.

A total of more than 270 large-scale floods have been recorded since the city was founded in 1703 – the worst in November 1824, when the waters rose more than four metres above normal levels, destroying 450 houses and leaving hundreds dead.

Although the idea of the complex was first put forward by field-marshal Minih in 1727, it was not until 1979 that the project began to become a reality under the Soviet regime, only to falter with around 65% of the project completed in 1995 amid the political and economic changes.

Work recommenced in 2005 with the help of $245m from the European Bank for Reconstruction and Development (EBRD) – said to be its largest ever single loan – and the political impetus of President Vladimir Putin, who himself originally hailed from the city.

In addition to the 25km dam complex itself, the scheme also included the construction of a six-lane highway running along its top, six discharge sluices, closable flood gates for two navigation channels to allow ship access, a series of bridges and a major new tunnel to carry traffic.

Bringing the project to completion cost around $420m, with funding coming from the Russian Federal budget, the European Investment Bank and the Nordic Investment Bank, in addition to the EBRD.

Founded by Tsar Peter the Great and intended to provide him with a ‘window on the Baltic’, St Petersburg lies on the shores of the Neva Bay, in the Gulf of Finland at an elevation ranging from sea level to more than 175m at its highest point in the Duderhof Heights.

With a significant section of the city no more than four metres above sea level, flooding has long been a problem for St Petersburg’s population, although the underlying cause has only been fully understood fairly recently.

High winds blowing eastwards from the Gulf of Finland were initially thought to be the root of the problem, forcing water to back up along the Neva and ultimately breaching the city’s embankments.

However, research has established that a much more complex hydro-meteorological system is to blame – with cyclonic low-pressure fronts originating in the North Atlantic drawing larger volumes of water into the almost land-locked Baltic Sea.

This sets up a series of long, low-frequency waves in the water – akin to a tidal bore – as the cyclone moves further inland, which become higher when they meet the shallows of the Neva Bay and then ultimately spill over into the low-lying areas of St Petersburg.

Details of the St Petersburg ‘dam’

"Work recommenced in 2005 with the help of $245m from the European Bank for Reconstruction and Development (EBRD)."

The island of Kotlin lies in the middle of the Neva River delta and naturally divides the seaward approach to the city into two channels – one to the north and a second to the south. The flood defence project bridges the Gulf of Finland, from north to south, with Kotlin and the island’s fortified town of Kronstadt, at its centre.

Extending to a total length of 25.4km, the dam complex stands eight metres above sea level and is 30m wide, accommodating the new north-south road link.

The barrier consists of 11 rock and earth embankments, with six 24m-wide sluices to discharge the outflow from the Neva, while the navigation channels have closing gates to be shut when there is a risk of flooding.

The southern main channel – C1 – is 200m wide and 16m deep, and remains open all year round; the 110m-wide, 7m-deep C2 to the north operates when the water is ice free. Two 130m-long, curved doors form the flood-protection gates for C1, resting in dry-docks to either side of the channel. When a flood warning is issued, the docks will be flooded, the doors then floating into the closed position.

With the barrier itself also forming a major part of the structure of the city’s ring road, ensuring uninterrupted traffic flow required the construction of a number of additional features. Road bridges span each of the sluices and while the C2 navigation channel has a lift bridge, a tunnel section set 17m below the flood gates conveys the roadway underneath the main C1 channel.

All 15 of the tunnel sections were originally constructed during the 1980s, but not connected. Joining them posed some engineering challenges, since once in situ, it would be impossible to access them for maintenance or repair – necessitating a design specification which called for a lengthy, high-performance lifetime.

The contract was awarded to Trelleborg Engineered Systems and the solution chosen represented the first use of their 40m-wide, seven metre high ‘Omega’ seals – named after the similarity of their cross-sectional profile to the Greek letter – in a cut-and-cover tunnel of this kind.

Needing to exclude water at high pressure, but still maintain adequate three-dimensional flexibility, the installation uses a unique double-seal approach, an inner Omega seal backing up the outer one.

Built to withstand temperatures from 30° below zero to 70°C, it is a design described by the company’s Moscow sales manager as ‘made to provide resistance for the next hundred years’.

Rosstroy, the Russian federal agency for construction, housing and communal infrastructure, were the client and project sponsor. Halcrow acted as design team leader, with operations and planning services being performed by Royal Haskoning.

Vinci and a number of local building and civil engineering firms were responsible for the construction.

The seals on the tunnel sections were provided by Trelleborg Bakker and manufactured in their Ridderkerk factory.