The 5th tunnel boring machine (TBM) made a breakthrough on the deepest section of the 41km-long STEP deep sewer tunnel on 18 December 2012. Image courtesy of CH2M Hill.

The STEP project is scheduled for completion in 2015. Image courtesy of CH2M Hill.

As of February 2013, 33km of tunneling has been completed. Image courtesy of CH2M Hill.

Herrenknecht designed and commissioned the segment production plant as part of the project. Image courtesy of Herrenknecht Formwork Technology. 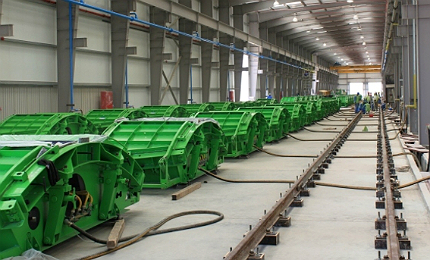 The project, which is scheduled for completion in 2015, is being carried out with an investment of AED 5.7bn ($1.9bn), with CH2M Hill as the program manager.

The current project forms a crucial part of Plan Abu Dhabi 2030, which is a comprehensive plan of developing Abu Dhabi to accommodate the increasing population in the city, which is anticipated to reach three million by 2030.

The project is expected to supply 15 cusec of greywater for irrigation. As of February 2013, 33km of the overall 41km of the tunnel has been tunnelled.

The STEP project involves construction of 41m of a deep sewer tunnel, 43km of supply tunnels, which will be smaller in diameter to transport the sewage to the treatment plants, and an underground pumping station at Al Wathba with a pumping capacity of 30m³ per second. The tunnel will start at a depth of 27m underground and reach a depth of 100m towards Al Wathba.

The 41km main tunnel will begin at Abu Dhabi Island and pass beneath Maqta Creek to the mainland. The sewage water from the connecting sewers will be directed to the deep tunnel through gravity, where an underground pumping station will lift the sewage to the Al Wathba Independent Sewage Treatment Plants (ISPTs) for final treatment.

The connecting sewers or link sewers will overall enable the city to do away with 35 existing pumping stations which are on the verge of finishing their useful life.

Construction of the sewerage tunnels in Abu Dhabi

Impregilo Group was awarded the contract to construct the T-02 stretching 15km in September 2009. The tunnelling was done with an excavated diameter of 6.3m and constructing six access shafts at depths of 40m to 50m.

Impregilo Group was further awarded a contract to construct T-03 stretching 10.5km in November 2010. The work involved excavation at a diameter of seven metres and construction of four access shafts at depths of 60m to 80m.

The tunnelling of section T-01 of the main tunnel is being carried out by Samsung C&T Corporation of South Korea. Three tunnel boring machines (TBMs) supplied by Kawasaki Heavy Industries are being used for the construction.

The project reached a major milestone in January 2013 with the completion of the 25km tunnel stretch by Impregilo. The tunnelling was carried out using five Herrenknecht TBMs.

Contractors involved with the UAE’s STEP

Unibeton Ready Mix has been awarded the contract to supply the concretes for the link tunnels. The company was also involved in supplying the ready mix concrete for T-02 and T-03 parts of the main tunnel. GE will supply eight pump drive trains, including pump process automation for the pumping station. The pump drive trains will be rated at 6.38MW each.

Commodore Cement Industries has so far supplied more than 17,700 lining segments for the project. The company will also supply more than 40km of jacking pipes with internal diameters ranging from 700mm to 3,100mm, including several access shaft segments for the link sewers.

Site overview and administrative services for the project are being provided by Mott MacDonald.

The contract for the construction of the pumping station has been awarded to Odebretch, while Drake & Scull Water and Power (DSWP) will carry out the design review, procurement and construction of mechanical, electrical and plumbing (MEP) and instrumentation works for the facility.

On 2 July 2003, International Power (IP) announced the successful conclusion of negotiations to finance the acquisition and expansion of the Umm Al Nar power and water desalination plant as part of Abu Dhabi’s power and water privatisation process.