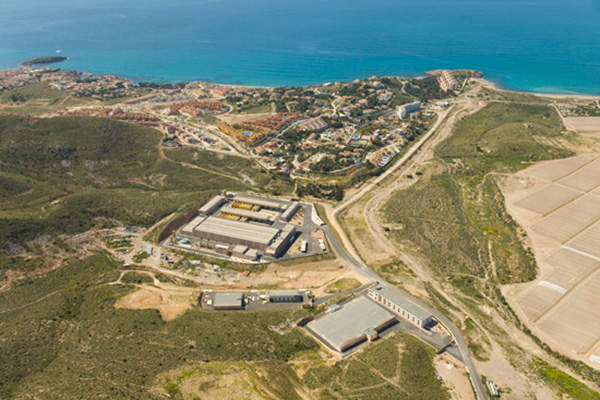 The Valdelentisco desalination plant is located in Murcia, in south-eastern Spain, Image courtesy of Cadagua. 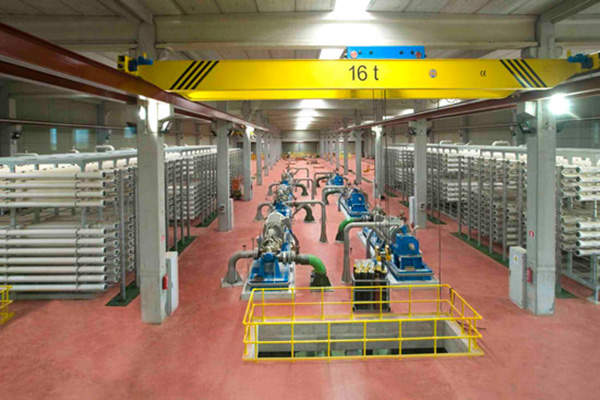 The plant's current maximum production capacity of 145,000m3/d (expandable to 200,000m3/d) makes it one of the largest desalination facilities in Spain. Image courtesy of Cadagua. 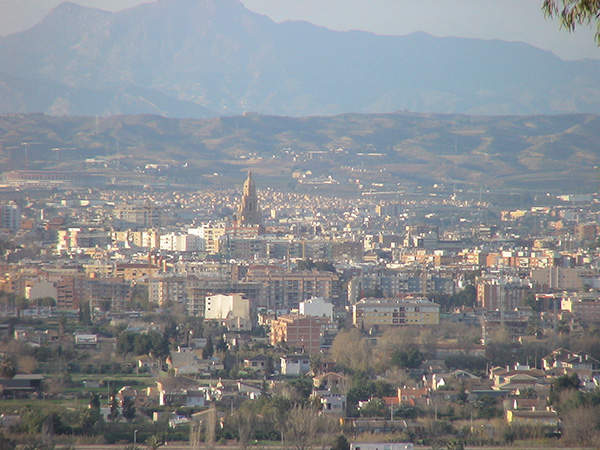 The plant was built with the aim of serving about 400,000 inhabitants in the region of Murcia. 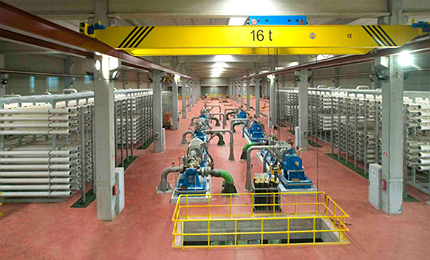 Valdelentisco Desalination Plant is a sea water reverse osmosis (SWRO) desalination facility, located on the left bank of the Rambla de Valdelentisco, Murcia, in south-eastern Spain. The plant’s maximum production capacity of 145,000m3/d (expandable to 200,000m3/d), which makes it one of the largest in the European country.

The water produced by the Valdelentisco SWRO plant is supplied to the region of Murcia, through the distribution network of Mancomunidad de los Canales del Taibilla, the city of Cartagena and the Guadalentin Valley for irrigation.

The project was undertaken by Aguas de las Cuencas Mediterráneas (Acuamed), the state-owned water utility of Spain, which is also responsible for executing majority of the A.G.U.A. desalination programme, sponsored by the Spanish Ministry of Environment. The programme aims to improve the management and reuse of water in order to achieve a sustainable water supply.

"The water produced by the Valdelentisco SWRO plant is supplied to the region of Murcia."

The Spanish Government water agency, acuaSegura (now Acuamed), had awarded a design and build (D&B) contract to a joint venture of Cadagua and Ferrovial Agroman. The joint venture was also given the responsibility of operation and maintenance (O&M) of the desalination plant for an initial period of four years.

In May 2012, Cadagua was appointed as the sole O&M contractor of the plant. As per the contract, which is valued at €15m ($22m), the company will operate and maintain the facility for a period of four years (expandable to six years).

Technical assistance for the desalination project was provided by Inypsa, one of the leading engineering firms in Spain. Siemens supplied it process control system SIMATIC PCS7 for the plant.

Construction of the Valdelentisco SWRO

The design, build and maintenance (DBM) contract for the Valdelentisco desalination plant was awarded in 2004. Backed by the Spanish Ministry of Agriculture, Food and Environment, construction on the project was started in January 2005.

It was completed in early 2008 and operations were commenced in April 2008. The plant was officially commissioned in May 2009.

The total cost of building the plant, including that of the open sea water intake system, pre-treatment building and electromechanical equipment, was €128.12m ($189m).

The Valdelentisco plant has an open sea water intake system, which is comprised of a five metre high cylindrical tower anchored at a depth of 25m. It is designed to minimise the risk of variations in the sourced water quality, so that the treatment process and the final product are not affected.

"The European Union (EU) had contributed about €63m ($93m) through its European Regional Development Fund (ERDF)."

The sea water is transferred to a pumping station through a pipeline comprised of two parts, the first being a 627m long jacking pipe and the second an 823m long high-density polyethylene (HDPE) pipe. The pumping station is fitted with eight submersible pumps, with provision for three more, to expand the production rate to 200,000m3/d in future.

A double glass-reinforced plastic (GRP) pipe, measuring 785m in length and 1.8m in diameter, carries the sea water further to a 1,200 cubic metre intermediate raw-water tank located inside the plant.

Further filtration is performed by passing the pre-treated and duly-conditioned seawater through cartridge filters made of rubber-coated carbon steel. These filters are arranged in two lines of seven filters each. The filtering media are made of polypropylene. The pore size is 5µm.

The RO design implemented at the Valdelentisco plant is based on a dual pass system. In the first pass, the pre-treated water is fed to the RO membranes using six high pressure trains arranged in two separate lines, with three (expandable to eight) trains in each line.

The second pass is used to keep the boron level below the prescribed limit of one milligram per litre. It employs a single step process to achieve this level, unlike the majority of the present desalination plants which use a two stage technology.

Bajo Almanzora seawater desalination plant is located near the Almanzora River creek in Cuevas de Almanzora, an administrative district located in the Spanish state of Almeria.

The Barcelona desalination plant is located next to the mouth of river Llobregat in the municipality of El Prat del Llobregat, Barcelona.

Well-treated wastewater has enormous potential as a source of water for crops, households and industry.

Small-scale water purification systems can be the ideal solution for areas with poor water treatment infrastructure.